On November 9, the head of the press center of the US-backed Syrian Democratic Forces Mustafa Bali claimed that SDF members and uS troops had participated in an “airborne operation” to capture a “prominent ISIS leader” in the province of Raqqah.

Bali provided no details of the supposed operation and reavealed no name of the “captured ISIS leader”. The US-led coalition has not commented on these claims so far.

Furthermore, there are high doubts that US troops need any kind of SDF support to carry out an “airborne” operation in any area across Syria.

The SDF had arrested yesterday evining a senior leader from ISIS near Reqqeh, in a special operation with international coalition.

In March 2017, the US-led coalition emplyoed its troops to carry out an airborne assault to capture the Tabqah dam from ISIS while SDF units were approaching the nearby town of Tabqah, the Tabqah airport and the dam itself from several directions. Then, the SDF was also claiming that its fighters were actively participated in the operation. However, in fact, it appeared that most of the work was done by US-led coalition troops.

In May 2017, US troops were also caught on camera on frontlines against ISIS in the province of Raqqa. At that moment, the Pentagon was claiming that US troops deployed in the coutnry for “advise and assist” mission only. However, later it appeared that US troops were actively participating in the anti-ISIS advance and even spearheaded the key SDF operatons. This fact became an open secret in 2018 when the US-led coalition openly started using its troops as human shield to defend the SDF from Turkish miltiary strikes.

The US-led coalition also established its controversial base in at-Tanf in southeastern Syria and declared a “security zone” around it striking government troops approaching the area. This “security zone” is actively used by ISIS as a safe haven in the war-torn country accoridng to Syrian and Russian sources.

The US-led coalition “complex” relations with ISIS remains one of the key point of concern of the Damascus government and its Iranian and Russian allies.

In other words – They rescued him – SNAFU – Again

Propaganda lies to try and uplift the image of the Kurds in the wider world. FUKUSITUR love ISIS and formed it . Any fights between them are lover’s quarrels ; few,far-between and always made up with plenty of hugs and kisses.

“Yeah… that looks like the terrorist bastard. You’re not getting away this time, prominent ISIS leader! Dig out the other pieces, cuff him and tell MacDill to send the choppers in for extraction.” 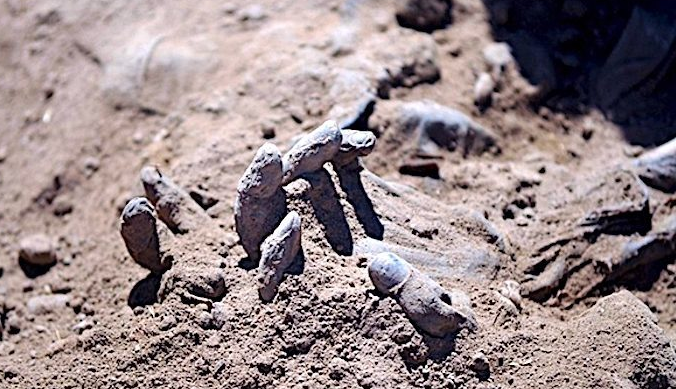 What nonsense, the heads of ISIS take US helicopters like taxis, they call and those arrive, what shoot and shoot.

SDF and US forces mount an operation to capture their own leg..

You can call me Al
Reply to  H Eccles

Guys! It’s less complicated than you think. Notice the OCP camo pattern and the beards, those are US Army Rangers. Although yes, the specialized equipment is also a giveaway. And it’s no secret that they’re there, the back seat driving we do is NOT to avoid sullying our hands but to avoid US casualties.

So basically we knew what everyone speculated/concluded to in the first place!