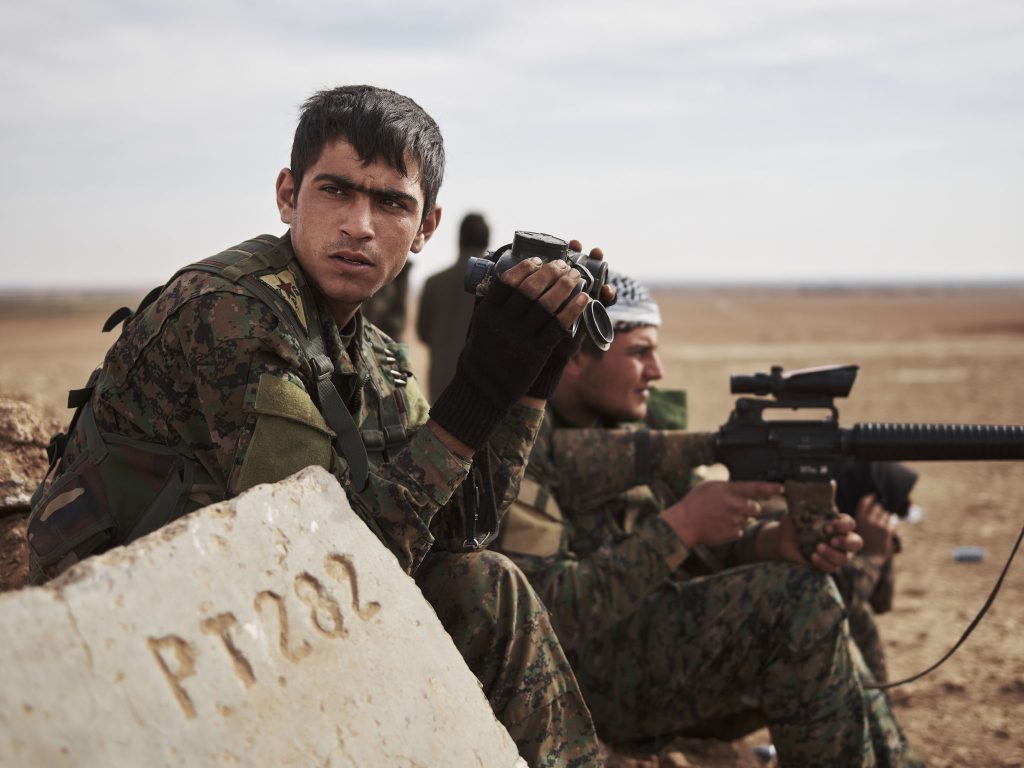 In Raqqa City, an ISIS VBIED targeted a gathering of SDF troops in Al-Mashlabi district. Another VBIED targeted the SDF in Al-Sabahia village west of Raqqa.

Moreover, ISIS claimed that its snipers killed two SDF fighters and wounded three others in the Al-Barazi Roundabout.

The United Nations said that more than 100,000 civilians are still inside the ISIS-held areas in Raqqa city.

Opposition sources published a new video of a displaced man from Raqqa talking about practices and insults, including physical violence, directed at him and his wife by the SDF after they left Raqqa.

It seems that tensions between the people of Raqqa and the SDF are not going to end soon.

#Raqqa Civilians talking about #SDF Violations , Civilians are saying that #SDF are beat them and don’t allow them to go back to their homes pic.twitter.com/e7qB7ldctJ

the one eyebrow warrior

There are a lot of special forces sitting there with a unabrow Kurd , see a C7 scout rifle with eclan sight means he is Canadian JTF2 or CSOR and Canadian scouts and snipers imbedded in the Kurds so much for them not involving themselves in Syria .

The SDF treating them bad are the Kurds , what do you expect from these Kurds and the ones from Iraq and Turkey they are inbred Jahili . Why the US chose only the Kurds is obvious they want racial hatred of the Kurds after these troglodytes go back home and leave the Syrian Kurds to deal with all the tension these foreign Kurds started .This is why the US will stay unless the Syrian Kurds don’t kick them all out , they will only be treated worse than the Philippinos are currently now .

The US should pull out. They have lost the war. They are just using Kurds and leading them to their doom. The Syrian people will never accept a separatist state belonging to Kurds within Syria. Turkey won’t accept them having their own nation at their border. Iraq won’t like it. Iran won’t either. This will unite everyone against the Kurds. Kurds are already disliked in the Middle East. It will create ill will toward the US occupation of Syria. All the nations in the GCS will not like it, except Saudis. Already Qatar is distancing itself from the invasion and has pulled away from supporting MB and ISIS. If Kurds want to make themselves absolutely hated, this is their chance. USA should step away. It will unite all of Syria’s neighbors more against the US. The USA wasted money and time for nothing. This doesn’t give them anything important. They don’t need the oilfields. they don’t need more bases. Russia will protect Assad.

EU don’t want this to progress further. They don’t want a war between Russia and the USA. They’ll get pulled in and their nations will be in the range of Russia’s missiles. That’s why Macron pulled back and said France doesn’t want regime change. He’s drawing lines. Germany also doesn’t want a war with Russia either.

Nothing to be gained. Syria will keep Deir Azzor and link up with Iraq. The Syrian region will keep festering. Everyone will want the USA out. Only Kurds don’t. But they will be absolute puppets. they can never defend themselves by themselves.

The US should stop wasting money. China is laughing at the USA, seeing the USA using up all its money in war effort halfway around the world. Japanese is starting to wake up. They don’t want to be sitting ducks for North Korea’s missiles forever, being held hostage. They will make nice with North Korea soon. It’s in no one’s interests for a war to break out with a nuclear-armed nation. Japan will lose definitely even if North Korea is reduced to ashes.

The US should cut its losses and forget about Syria. Nothing good will come out of attacking SAA further. They have legitimacy. USA don’t. No use pretending that Syria does chemical attacks either. Makes USA look shifty, a liar. Next chemical false flag, and America will lose all credibility.

Qatar is being isolated for supporting the MB and Iran, not for leaving them. Your whole argument is proven false.

No, the main reason for its isolation is its moving closer to Iran. Because Turkey switched sides, it is now on the side of the Syria-Iran-Russia-Turkey alliance. It’s because Qatar is no longer supporting ISIS and MB that the Zios have decided to isolate Qatar. Because Qatar was waking up, it is no longer useful to them. The MB and ISIS connections were known for a long time — why did the Saudis and others only complain about it NOW???

Because they want to hit Qatar with every bit of dirt they have on it. They don’t care that Qatar supported ISIS.

Well, actually that was the reason Qatar was a member of the club. Israel is still supporting ISIS, with medical care — why would it care whether Qatar was funding ISIS? It wouldn’t. It would like Qatar to continue doing that.

However, Qatar’s ally, Turkey, woke up to how it was being used, after how they saw Washington grooming YPG, and changed sides. It would only make sense for Qatar, an ally of Turkey, to realize its support for ISIS was not going anywhere either. It would just be used to create a second Israel in Syria, something Qatar would have no interest in seeing happen. Qatar doesn’t like Kurds. Even Assad’s government is better than Kurds ruling parts of Syria for them.

So realizing how ISIS were set up for defeat and that a Sunni Muslim Brotherhood-led caliphate in Syria was never going to happen, Qatar decided to withdraw its support of MB.

The Gulf nations had no problem naming Qatar as a terrorist supporter at that point. Qatar was dropping out as an ally in the anti-Assad war effort. Whether they named Qatar as a terrorist-supporter or not would make no difference to the situation – Qatar was on its way out of supporting insurgents in the war.

The main reason the blow-up occurred is because of the Iran issue. That is why breaking relations with Iran is mentioned at the top of the list of demands.

The Kurds had their Nation split by the western powers mainly Britain and France. They are entitled to have their land back and not to be dominated by other nations.

Nope, they never had their own nation. They were always governed by others.

Fake reporting here about relations between SDF and refugees. One can always find some IS refugees or people who will say anything for a bit of money. The real indication is fi Tabqah. Most of the refugees are back, services restored and many, many volonteers. A local police force for Raqqah is being trained. Already thousands of volonteers. That is the reality, not a fake video of one person.