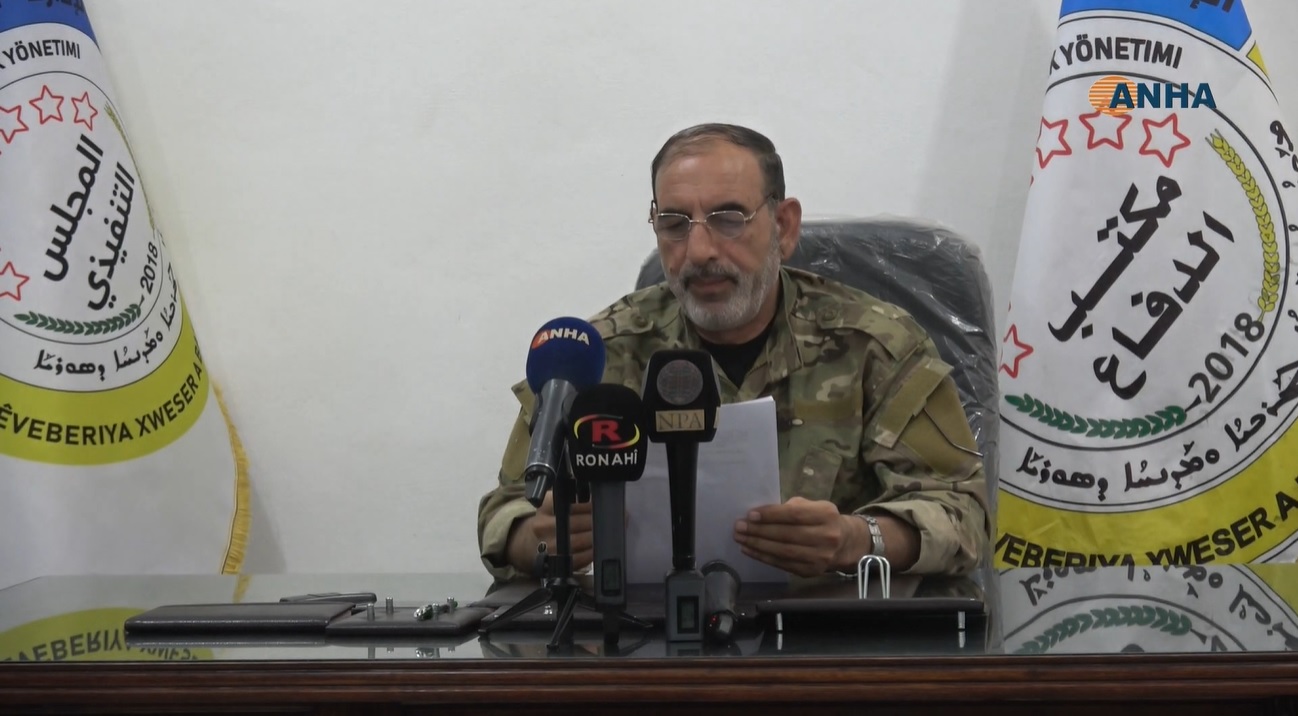 Zidan al-Assi, Co-Chief of the Defense Office in the so called Autonomous Administration of North and East Syria. Source: Hawar News Agency (ANHA).

The Syrian Democratic Forces (SDF) have begun withdrawing their troops from the Syrian-Turkish border in accordance with the U.S.-Turkish “peace corridor” agreement, which was reached earlier this month.

In a conference on August 27, Co-Chief of the Defense Office in the so-called Autonomous Administration of North and East Syria announced that the Kurdish-dominated group had withdrawn its troops from at least two border towns.

“First practical steps were initiated in the 24th of the current month in the area of Ras al-Ayn \ Sari Kani where some berms were removed, units of the People’s Protection Units (YPG) and heavy weapons were withdrawn to new positions and border posts were handed over to the military councils in the area … On the 26th of the current month the same said steps were taken in the area of Tell Abiad \ Gire Spi,” Zidan al-Assi said.

The commander added that these steps reflects the SDF’s “serious commitment to the current understandings” and its “keenness to reach a solution to all issues through peaceful dialogue with neighboring countries.”

The SDF’s announcement confirms that the U.S.-backed group will participate in the “peace corridor” agreement. This could lead to more tensions with the Damascus government, which had rejected the agreement.

Sorry – not buying it. YPG turning over defense of Tell Abiad and all the other border cities to ‘local councils’ with nothing but small arms, based on a Turkey/US agreement? What are they going to do when those 500,000 head-chopper refugees start streaming in?

Thats a different aganda. Those refugees wont. There is not even food for them.

But it would make a lot of sense UN and others were able to have supply for people returning here as well as in many areas of the world.

The last estimate for the world are about 40 milions – mainly muslims.

Turks should open up more. I am sure more parts of the world would help the SDF area then the Assads to resettle. Ot also make sense Turks having less hostages and problems about it.

A good thing about the SDFs are its a limited area and relative well controlled. We danes produce a lot they need(actually they need almost everythin). We could send them, if my Goverment wish. I am positive for some 100 millions in all kinds of eqipment. Fx we make millions of windows and already do export. I am sure they need windows here and there – too.

Better to export factories for them to make products themselves.

Point is, they must have made the calculation that US will hold Off the evil turkish headchoppers and islamists and they consolidate in the center. Out of reach of turkish artilley.

I think the Kurds are playing for time, and that the US has told them that they would not give Erdogan more than this 5KM corridor. And even then Kobani will be lost, whichs defense has been in Kurdish minds their greatest achievement. Also the Kurdish base is furios, while the leadership seems helpless. The option of a deal with Assad was just recently renewed, while latest talks have been not successfull, as Kurdish leadership still hopes to achieve their “Autonomy”. But Afrin is still on their minds, and many want to prevent that outcome happening again. If they finally come around to a deal with Assad, or if they would prefer to loose the territorys totally, is the question no one now can answer. We will have to see what Russian diplomacy can achieve to convince them finally.

Something’s rotten in the state of Denmark.

You are not here.

Well you are, and you are proof for everyone to see. Being a small country is no shame, but being a little bitch for a hegemonial state that acts like a 19th century colonial power sure is a shame.

Always the question. To whom belongs the land? To the inhabitants or to a regime? In a dictatorship, my idea is it belongs to the population of inhabitants. Not to those who took power without consent of the people.

You mean it belongs to the Turkish Kurds, who ethnically cleansed the area from Arabs? Showing your true colors, dutchie!

His true colours are not biased?

Not to be or not to be, there’s no question, never more https://www.poetryfoundation.org/poems/48860/the-raven

Oka hey, kaput, finito the conquer spirit, the conquers or will run or will be killed. Good joke, that one, of buying the Greenland. Reveals the measure of the retarded.

SDF needs its forces in the south where the oil is. They simply cannot afford a second (even first) front with Turkey. Turkey wants to relocate the refugees, creating a buffer between Syrian Kurds and PKK, hence eliminating potential active cooperation between them. And Turkey wants to concentrate on Idlib as a constant pressure on Assad government. Assad wants to regain both the northern and eastern territories, thus having Syrian Kurds fight with Turkey would serve Asaad best. Russia (as well as Iran) is interested in getting US troops out of Syria, preferably by hands of Turkey.

Clearly the biggest winner from this deal is Turkey, and biggest loser is Asaad. Which is why we saw the revenge battle of Khan Shaykhun.

You can call me Al
Reply to  lovethemapples

Wow, you really are a tosser.

Jim Prendergast
Reply to  You can call me Al

I fail to see the elements of tosserness in the statement. Wherein do you dispute?

lovethemapples
Reply to  You can call me Al

You can call me Al
Reply to  lovethemapples

Good lad. You owe me a compliment the next time you see my post.

lovethemapples
Reply to  You can call me Al

lololol…treacherous kurds……they will go into history books as the most stupid pieces of Folks ever to have lived on planet earth…..lol…….syrian arab republic gave them all chances to reconcile with the Government….now….tthey Chose the Saudi/USA/israeli side which in turn gave Turkey the green light to invade eastern syria…lol…… in short….. the kurds will be dead meat before new year 2020…

First, they let the terrorists in, now they let an army in. Not a shred of honor nor dignity. lol But hey, people do what they must to survive in war. They have now irrevocably casted their bets on US and Israel support.

This is when the Syrian tribes in the West get their vengeance. For all their greed, there is a potential that they will end up with nothing due to (as you state) dishonour, disloyalty and lack of dignity.

They have been played like the brainless fools they are.

“where some berms were removed”….. anyone know what berms are ?.

Thank you, I have never heard of that before.

PS Cheers for the image as well.

LOL, the SDF aren’t the kurds making all the trouble, they’re the ones doing everything they can to avoid it. The SDF leadership is practically bending over backwards trying to accommodate Erdogan now, they’re doing just about everything he wants them to do and more, and yet he still refers to them as the main problem, LOL. One of the real problems for Erdogan is the Kurdish Self Defense Force, they’re the ones getting ready to give Erdogan a warm welcome when and if he crosses the Syrian border/Euphrates river, and they don’t listen to the Syrian Democratic Forces [SDF] leadership or the US, but they do have a dialogue of sorts with Assad and Putin. The self defense units are mainly concerned with protecting their own home territories, they’re mostly YPG fighters but there’s also a few that come from other Kurdish Political militias, and even though they’re only loosely affiliated and not so well organized, they’re reasonably well armed well trained and disciplined. For the last 18 months many SDF fighters have been deserting and joining the self defense units, and most if not all of them take their weapons with them when they go, and some even take their equipment and vehicles too. But some of those ex SDF fighters are also joining the ALF in Aleppo, and they’re the ones killing all the Turks lately, they’re actually the biggest headache Erdogan has. The Afrin Liberation Force [ALF] operates in SAA controlled parts of southern Aleppo, they strike Turkish controlled areas to the north and then quickly return to SAA held territory, and in the far north where most of the attacks against the Turks occur, funnily enough, the Russians and Turks conduct joint patrols to stop it happening, but it isn’t working. No official Turkish casualty figures have been released since the ALF increased hostilities earlier this year, maybe Erdogan’s too scared to publish them. So why is Erdogan making a big deal over the SDF, no Turks are being killed by the US controlled SDF, only by ALF fighters, and they live in SAA controlled territory, so I would’ve thought that these guys killing all the Turks, the ALF, should be the ones he’s threatening the most, but no, all he does is lob in a few artillery shells everytime they kill some of his soldiers, instead it’s the US controlled SDF he has a big target on. If Assad keeps pushing into Idlib the refugees will start flowing north in no time, they’ve already started, and a 60 km safe zone in SDF territory would certainly house quite a lot of those refugees, so maybe there’s a logic behind Erdogan’s reasoning, he can’t stop Assad causing a refugee crisis for Turkey, but he might be able to find a new home for all those refugees, right between the Turkish border and the Kurdish homelands, if the US let’s him that is, and they keep saying no you can’t. He seems to be in a bit of a pickle right now so I wonder what his next move will be, from my perspective he only has two choices, one, stop the refugee crisis before it begins, ot two, find them new homes before they get to the Turkish border. So it’s either please president Putin, stop your nasty friend Assad scaring all those refugees, or please President Trump, let me have some land to house them on.