Sources close to the Kurdish-led group said that the towns of al-Ahras, al-Rihaniyah and Manajir as well as the nearby grain silos were recaptured from the Turkish-backed National Syrian Army (NSA).

The Syrian Arab News Army (SANA) confirmed that the SAA deployed troops inside the newly-recaptured villages. The SAA’s presence in the area limited the activity of the Turkish Air Force (TAF), drew a red-line in front of Turkish-backed militants and secured the routes leading to Ras al-Ayn, which is still witnessing heavy clashes.

The SDF launched a similar counter-attack south of the border town of Tell Abyad in southern Raqqa, taking advantage of the SAA deployment in Ain Issa. So far, Kurdish forces have recaptured several positions, including the town of of Jadla.

Wonderful news are coming, thanks god for this unification it was very essential!

The only person who could’ve helped the world choose peace was Donald Trump. Worth considering

MSM would call you mad over this statement, bu you certaintly are right.
Though lets wait till he stop trying to regime change Iran for Bibi.

Yea. That would be nice…but not until America’s shale oil production collapses. Till then its maximizing the price keeping iranian oil off the market.

Israel may find itself an expendable chip for other transactions. After the election of course. And if the Democrats win they’ll cut them loose
Their party is anti israel.

Do not mistake the presence of a mere handful of Democrats critical of Israel as them being representative. When it comes to Israel there is only one party in the US, the lets give Israel free shit and send our kids to die for Israel party.

My party proposes that we give Israel 700 million USD extra this year, on top of the billions it already gets. Because we stand with Israel.

You’re a bunch of anti-semites cause my party proposes that we give Israel 750 million USD extra. Because we stand even more with Israel.

How dare you suggest we are anti-semites? 800 million USD extra for Israel!

Trump is the cristian zionists prophet of Israel. Will it be or not Trump who will build the 3rd temple of Jerusalem? 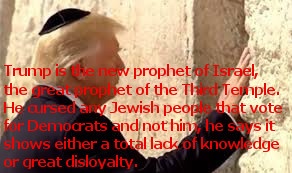 If Syrian peace comes soon, could you see the Nobel Peace Prize being shared by Presidents Trump, Putin and possibly Erdogan? The neocons would howl to the moon and back.

IT doesn’t stand even as a joke.

Possibly Trump and Putin but not Erdogan, he’ll be in a Turkish or UN jail.

As one comedian pointed out, Trump has not killed enough people or bombed enough countries to deserve a Nobel Peace Price!

Upon election Obama was immediately issued a Nobel peace prize for have done absolutely nothing. Then went on to authorize wars of aggression against Libya and Syria, that have lasted the entire current decade, all whilst radically expanding the Pentagon ‘targeted’ drone assassination program, that has killed thousands of civilians from Pakistan to Africa as ‘collateral damage’. Yet many in west still think favorably of Obama – essentially because the US MSM grossly under reported, and under critiqued, any of this destructive legacy at the time, or since.

The Nobel Peace Prize has a new name in honour of Obama who once and for all defiled what little credibility still remained of this once meaningful and now meaningless award.

The new name reflects the reality of what the award has come to truly represent: The Nobel Prize for Atrocities

The name was not the only change, as the award goes not to individuals but to a nation in recognition of it being a collective effort to inflict the most horrendous atrocities upon societies around the globe to merit this prestigious award.

Of course the US is a top contender for the award and worked hard to handily beat out competition, winning the prize twice for exceptional accomplishments in saving Libya from Gaddafi and of course, the awe inspiring ‘liberation’ of Raqqa told best in pictures! Just make sure to not confuse pictures of post-liberation Raqqa with post-firebombed Dresden – a common mistake.

Trump had no choice.

Lets hope so. And lets hope Killary will join the race. A second humiliation would be more than she could chew.. ;)

Oh man it would be sweet liberal tears. Also third:) she lost to Obama as well.

Do the Turkish controlled zones like Afrin have abortion rights as in Turkey? or are they under Islamist law of allied militias?

Try to guess, what’s your bet?

Seems the clear cut turkish win is now not so clear.. ;)
Good fighting SAA+Kurds!
Erdodog must be raving mad in this palace!

This should quiet down those that dismissed fighting capabilities of the Kurds. The US picked the Kurds for a reason, although politically a bad move.

It is good to see. Seems like some of wind is out of their sails. Turkey will need more than proxies to win but I’m assuming he’s using proxies so he can cut them loose if things go wrong.

More betrayals are coming soon. The Idlib guys already got their ships burned.

They picked them because they were there to be picked, that is they wanted a land of their own which would allow Syria to be partitioned. The Kurds are decent fighters, but have always not been that great, partially due to manpower shortages, partially due to leaders who are only in it for the money and partially because they always seem to get thrown under a bus by an “ally” and therefore suffer from morale issues.

Well, it looks like Kurds (ex-USA-Israel puppets) finally are doing something wised (?)….hummm not really, they did not have other choice. I hope this Kurds-Syria-Russia agreement save their life from the genocide Turkey.

One of the last news (source, Sputnik): “Syrian forces have entered the border town of Kobani, a Sputnik correspondent reported, citing sources in the region.”

Looks like another decade worth of US interests wiped off the map, literally by the day . Stay tuned for a century more of the same loss in a week or so.

SInce this days are drowing if bollocks we need to recap abitt, about whom the UssA is backing, along with the ZATO forces, Bozo the Clown, the MiCrony and Mutti Morekill, and all our MSM.
https://www.youtube.com/watch?v=ouBzc6gNPf8
An happy head chopping moderate eating an hart.

FSA, the canibal leader, whom eat people harts, yeah, the heroes of the Imperial banana republic and Turks, and is by the west regarded as noble fighters for humanity, freedom and democrasy, yeah.
And if you think the level of lies cant be much worse, not only to cover up the insane FSA and whatever the scums label them selfs as we speak, to justify more war on the people of Syria.
Then we have the white helmets, coluding and partisipating in an happy head chopping of an 12 year old child, yeah, the freinds of the west, the MSM whom guards and helps gives WH the propaganda they needed unconditionaly and never told us the truth, WH is an British MI6 (foreign op, where as MI5 is domestic) created, and founded by the same west that wants to war to continue.
https://www.youtube.com/watch?v=kr1YTS-4Hzs
Its 18 y, limit on this video, and its is horrible.

This video is brutal, and shows us also an White helmet propaganda associate, the hero of the west, but then again it was just an Palestinian child so whom the f…. cares, this people are also backed by the Jews, never forget that and the UssA Gov. and another one whom have conviniently slipped thru the whole spectatcle but never the less is one of the majore players in the creation of this rats, Saudi-brabaria and UAE.
An gov, that “fought” Al-CIAda in Iraq, while the bombed the force that fighted Al-CIAdas in Syria.
And claims the war is because of Assad, when I know the UssA have tried to take over Syria since the 50s.

Yeah, even the liberal eh….. humanistic, right, conserned, always, politicians was on this, incl Norway where our JudePress is extatic and suports the WH and FSA full spectrum coverage and never ever do we hear anything else, never, and then we have scums whom is pissing wells as we speak, PV4 an ISISrael pissant, whom is and have been an 95% as I define them, but they always have to do their masters bidding, like Saker whom claimed the Catalans where UssA/SoreAss backed scums, not just violent criminals as our MSM wants them to be, where as in HK they are heroes, yup, never have the propaganda been more obvious as it is to day.

There is, how to say it, one day, ladys and gentlemen, one day must we just dragg the f…. out of the Gov buildings and just hang them on the nearest possible lamp post we can find.
The west, incl MSM have no shame, and will unless we just hangs them never be held acountable for the decades of crimes against humanity witch they have been the majore player behind, because the idiots whom is called Polticians gets their news from the, eh…. ministry of truths aproved MSM whom never ever tells us anything but the truth, yeah, sarc of course but I guess you get it.
I am not shure I will sleep to night after been reminded what this scums trully are, the devils spawns.
But the real satan is the west along with the bigots in the arab world, Saudi-barbarians and Co.

And peace to you too. Remember, the darkness has not overcome the light.