On February 5, the US-backed Syrian Democratic Forces (SDF) kicked off a large-scale operation against ISIS cells in Deir Ezzor.

In a statement, the group said the operation was launched to avenge Saada al-Hermas and Hind al-Khudair, two local officials who were assassinated in southeastern Deir Ezzor two weeks ago. ISIS said its cells had shot and killed both women.

“Dozens of terrorists were arrested … and a large amount of ammunition was seized,” the SDF’s statement reads.

The US-backed group said a summary on the results of the ongoing operation in Deir Ezzor be released to the public soon.

A recent report by the London-based Syrian Observatory for Human revealed that ISIS cells were behind 43 attacks in northeastern Syria between January 1 and 24. The attacks claimed the lives of 18 SDF fighters and 13 civilians. Most of the attacks took place in Deir Ezzor.

Last year, the SDF, backed by the US-led coalition, carried out a number of similar operations in Deir Ezzor. All failed to contain ISIS threat in the governorate.

I think the US and SDF have been more successful against Isis than the SAA and it’s allies have been.
The US/SDF arrests dozens of Isis supporters/fighters every week and they must be providing some helpful intel, but unfortunately the SAA hasn’t been so successful when it comes to arrests, so they need to know more about Isis if they want to stop them, good intel is always vital in this sort of fight.

Do you have any idea how stupid your comment really is, why would the USA arrest them if they were just moving them to another location [especially one they’re trying to pull out of], they wouldn’t need to arrest them, they’d just put out a recruitment call and offer them good wages.
Iranian’s have been among some of the smartest people the world has ever known, but the current REGIME and it’s supporters are among some of the most unintelligent people in the world. and you sound just like one of those morons.

Obama may have funded them during his administration but Trump didn’t, he kicked their butts, so you have to stop living in the past, things have changed and are still changing now, you’re living in a world that no longer exists.

Bullshit, SDF and Isis are the same thing, they change their caps and quickly switch from one role to another, the employers are the same and their motives are identical, to destroy statehood and the Syrian people, all for the dream sick of the great Isisrahell.

Sounds like something big is going on at the al Hol Extermination Camp.

SDF supposedly moved foreign ISIS wives out of that camp to another one (Roj?). Sounds suspicious – maybe this was really the U.S. shipping the ISIS brides and their head-chopper husbands to Afghanistan (to produce more little jihadis and kill freedomized Afghanis).

Militias around the camp – sounds like pro-Assad ones – have been mobilizing around al Hol and attacking sections of the camp. Maybe it was pro-ISIS militias…? The SDF’s al Hol ‘Head-choppers’ Safe Haven Camp‘ is falling apart, not that the SDF ever really had control. Half the refugees there are NOT ISIS and probably pro-Assad. They’re just unfortunate Syrians caught up in the U.S. purge of Raqqa, but the SDF has confined them to the ISIS cage. CENTCOM’s al Hol Final Solution® must be to foment a mass slaughter there to solve both the ISIS wives and pro-Assad civilian ‘problem’. Look at the size of this prison. It’s sort-of guarded by SDF but run internally by ISIS gangs. God bless America! 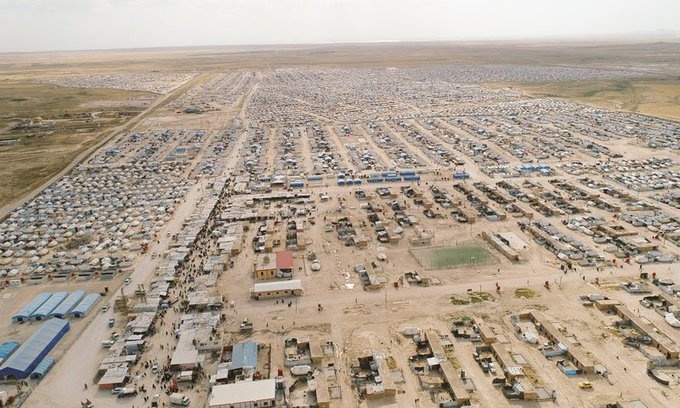