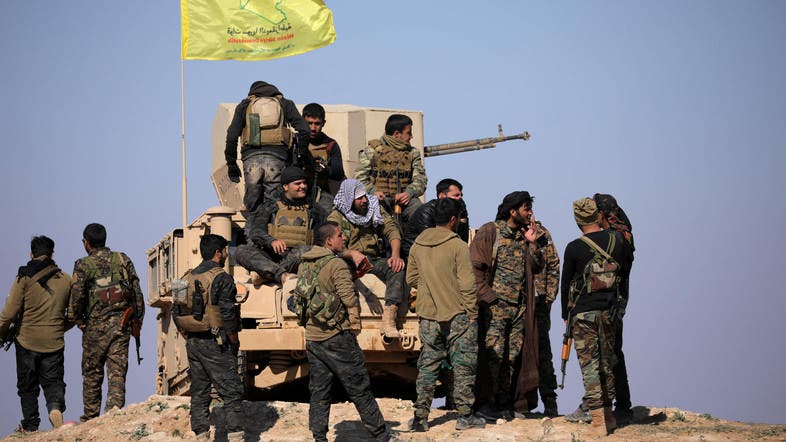 US-backed Kurdish armed groups, often referend as the Syrian Democratic Forces (SDF), are tearing around in fierce attempts to find somebody to rescue them from a Turkish military operation.

On October 8, the SDF said that it’s ready to negotiate with Damascus and Russia if it helps them to stay safe under the pressure from Turkey.

On Octobe 9, the group called on the US-led coalition and the United Nations to establish a no-fly zone over northern Syria like ‘in Iraq’. The group hopes that this would help to prevent a Turkish advance.

To protect people of NE #Syria from an imminent humanitarian crisis, we call the @coalition and the international community for the implementation of a No Fly Zone as was done in the past for the people of Iraq. @UN

What’s next? Would the SDF ask North Korea for missiles to defend itself?

Lol and what would enforce it? SDF SAMs? Hahhahhahha

I think that Saudi Arabia has a few Patriots for sale at a bargain price :)

Yeah, heard they were having a fire sale.

Lol. The sale has been a damp squib so far Zman. :) MBS needs mugs who are even bigger mugs than he is :)

The Kurds are 1st in line. Its all the US military ‘mug training ‘ they have had ,I suspect.

Eureka, gipsys collect scrap, the Saudis have a lot of Patriot scrap. Its a Kurdish /Saudi marriage made in heaven, Russ :)

Lol, I didn’t think of that…

i wouldnt be surprised hahahahaha

SDF is not wanted by Assad, as they invaded ISIS territory from where Syrians (natives) fled to Turkey and they want to establish a Kurdish state on Syrian Land.

SDF is armed and funded by the US and the West, they only lack air-support. If Turkey attacks them without air support, they may hold on to their grounds for a good while and International community will be behind them (as they were advertised as ”fighters against ISIS).

The proposed No-fly zone on the verge of Turkish operation on North East Syria is as good as a physical attack to Turkey by the US.

In case Turkey acts together with Assad to free the area from SDF / PYD / YPG and give it back to SAA to re-establish old Syrian territories, that will be supported by both Iran and Russia.

But if this is a show staged by US and Turkey and is to permanently protect PYD/YPG from SAA as an end goal, then Turkey will be one of the worst affected in the end.

You can call me Al
Reply to  Sakaramanga

Do not forget the Arab tribes in the East.

Worse than a traitor is a traitor-pussy.

Zionist satanic plan all along

SDF begging their former occupier-mentors for protection … the same mentors who just threw them under the bus …. you cannot get much more self-serving-desperate-pathetic than that.

The Kurds are a historic nuisance for all. They played a very destructive role in the unnecessary Syria conflict and acted as US proxies and the jury is still out whether Turkey will invade and annex a large chunk of Syria.

You can call me Al
Reply to  Ashok Varma

They are very pro-Israel; therefore by default they need to be eradicated.

Thats not correct at all. They are ontheir own turf being non enemie to Israel. It seemes You think Kurds need more enemies :( I dont believe, they do.

YPG are currently inside the UN recognized borders of the Syrian state – and most of YPG actually originate from within Turkey, having sought refuge in Syria over several decades. Ergo, they are not ‘on their own turf’ at all – they are in the Syrian state.

Of coursese anybody can make dirty poems as they wish. I woder why You gain and again try to define no facts and see a few poctures instead of the whole movie.

But facts are – as today – there hardly are a single Turk there. and never was apart from the ones from Caucasus Ottomans settled in and close to Afrin.

Do you seriously contest that the YPG are within Syrian state territory, or are an armed non-state militia acting against interests of the Syrian state? Bearing in mind the YPG have been heavily armed by a foreign power – US – who are formally hostile to the Syrian state.

I dont see that. They has not been uprisers but mainy has protected themselves. They hardly has made the many refugees in Turkey as well.

ISIS did and a short period by USA. Then SDFs by USA and a few others removed ISIS again.They should be rewarded for that.

cowards kurds . learn from Houthis how they are fightinf US led coalation with all its might. Hotuhis don’t hide behind women to fight . unlike Zionist and this traitor Syrian kurds who keep women in front to fight. But SDF is doomed cannot be trusted anymore . SAA should be deal with them very quilcy and disband this traiotor

No Fly zone set by Turkish Air Force over North Syria, supported by a new S-400 system. Good idea. No fly zone for US air power over N-Syria. I have a question. How Kurdish in North/East Syria make their national budget. Normal is, to have an economy, normal businness, go to work. In Rojava, almost all men and a lot of women are in arms. I know, Syria is still dangerous region. But, its time to finish this emergency law state and start to work, not only brandishing by AK-47…

sdf/kurds controlling 90+ per cent of Syria’s petrol where they occupy at the mom. National budget is US backpayment for the petrol they steal from Syria.

Thats not correct at all. And as long as they are not able to take it up as well as sell it, Your crap dont make sense at all.

SDFs never has said they are above that oil for own use. They want to share with the rest of the population. When ISIS took over great parts, it was from Baathists as private property of their – selling to the rest as well.

That of course incuded corruption of the greatest kind. Thats what You support.

Another thing is, there has been no investments in the oil business for many years too. Modern methods tell, You can get 3-5 time more by the wells, which Assads and Russians name as dey. They are dry for primitive production.

Even Russia use BP and Shell for second drillings on Russian gas- and oilfields. They of course has to pay some for it, but they also gets a lot og money bythemselves.

I am Jaziel
Reply to  Jens Holm

You are right, but these fucking braiwashed retards in here, don’t know any better. It is not their fault tho. They just need to open their eyes and do some fact checking. Or maybe they do not want to do that, because they are afraid of loosing their belifes. Erdogan bought that oil from IS and from Kurds in Irak, and that is the truth.

think twice when saying ”that is not correct” check 2:30 https://southfront.org/syrian-oil-and-us-troop-withdrawal-explained/

As I recall it, Turks dont have a single S399. Who should attack them?

Kurds appealed the abandoner US of A to establish no fly zone in NE Syria.

Well, I have to propose that you fuck off then.

They did it to themselves in siding with US empire to squat on and steal Syrian oil..

Fuck of dutch nazi scumbag, you pathetic cowardly backstabbing Kurdish friends are getting their come unpins, and there is nothing that piece of eurotrash like you can do about. Dutchfaget.

Actually, the above article directly quotes from the SDF Twitter account ‘Coordination & Military Ops Center – SDF’. That account is now repeatedly calling for no-fly zone protection. You can find lot more of the same pleading for protection at that SDF Twitter account, see:

Looks like someone really can’t cope with the imminent day of reckoning for the YPG in Syria.

I am Jaziel
Reply to  dutchnational

I totaly agree with U, The Kurds are not the problem here, the turks are. And right now it is a mouthpiece for turks, and anti kurdish. I have lost the respect of this site, and do you really belive that US and its allies will allow the Kurds to get a agreement with Assad and the Syrian goverent, and also with the russian. That some way or the other are playing their own game and have their own goals. Anyway why does not SA and Russia step in and protect this part of Syria, I am shore they would not be killed by the Kurds, maybe the helpers of Turkey will try and maybe the Turks will. Anyway my hope is that Turkey will be the big looser here and not the Kurds. So sop this fucking propaganda against the Kurd, and start to attack the real treath Turkey.

Why Kurds dont allow SAA to enter in Raqqa or in East Eufrates?….

Pussy Trump is a coward who will lower his pants when Erdogan orders so, heis a spoiled brat who always obeys bigger bullies.let say the slave in an master slave relation.

This is the stupidest group of idiots on the planet. They never should have believed US promises to provide it it’s own little statelet inside Syria. Instead they should have taken Assad offer and yet they are begging the US to help them? Stupid is as stupid does. You deserve it you fucking traitors!

OMG. They STILL believe it. Trump has officially declared Turkey to now “lead” “Anti-ISIS” operation, and Erdogan would not accept it if Trump would threaten to shoot down his airforce. Hope dies last.. But this may well be the last Kurdish hope before having to face the reality, that Assad is their only chance. Let it play out folks..

YPG want US to fly warplanes against fellow NATO member, Turkey?! YPG’s leadership are definitely not the brightest crayons in the box.

Kurds is the victim of US lies. Pathetic people…

yeah likely with a president that wish to withdraw all troops on the ground east of china and finish off the pentagon directorship – he wants that for himself and it’s about time people realize that he’s serious about ending the dismal history of america’s wars and rebuild it to what it once was.

any other notion just shows the ineptitude of readers and their inability to put 2 + 2 together and get 4. and moreover and despite son in law jared kushner, trump ain’t all that hot on israel either to the chagrin of said jared and his bff netanyahu and he’s definitely unhot or very cold on Iran, again to the despair of slime ball jared, slime netanyahu and double slime mohammed bin salman.