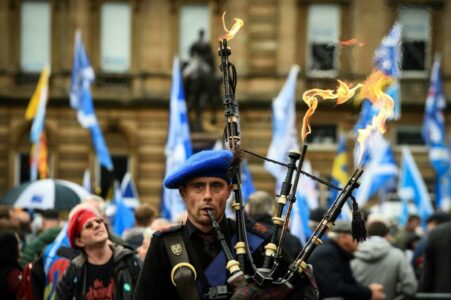 With Scotland opposed to nuclear weapons, leaked documents suggest London is in a quandary about what to do with them post-independence…

While Boris Johnson continues to reject any idea of granting the Scottish government the power to hold a second referendum on Scottish independence, there are signs that behind closed doors, the British defence and security establishment have decided it’s a foregone conclusion.

Last week it was revealed by the Financial Times that senior Whitehall officials were already involved in contingency planning for what would happen to the UK’s nuclear weapons bases at Faslane and Coulport, in the west of Scotland, if such an eventuality were to arise. All 11 Royal Navy submarines are located on the Clyde at Faslane, with around 200 nuclear weapons thought to be stored at Coulport.

There has been strong opposition to the UK’s Trident nuclear deterrent in Scotland for decades, not only within activist circles, but amongst the political elite. The Scottish National party and Green party, who form the current coalition government, are both pro-independence and anti-nuclear. As such, they have declared that Scotland’s future defence policy under independence would not involve nuclear weapons.

In response to the Financial Times recent revelations, the SNP published an article on its party website entitled: ‘Removing Trident will be one of the most important tasks of an independent Scotland’ – leaving Westminster in no doubt that it won’t be prepared to do any deals to maintain the nuclear base on Scottish soil.  It had been rumoured that one of the options being considered by the Ministry of Defence was that Trident could be leased to London, an idea the SNP dismisses outright as ‘a fantasy that would make even the most fervent Brexiteer blush: it would be so politically unpalatable to both parties that it will only ever exist on a screen in Whitehall.’

The other options apparently being discussed include the transfer of the nuclear submarines 170 miles away to Devonport in the south of England (although some have suggested there isn’t adequate space at the site) or even moving the facility to an allied country such as France or the US.  And as unlikely as it may seem that the UK would want to entrust another nation with its own nuclear capability, there is nonetheless a historical precedent for British naval bases abroad.  After Ireland became independent from Britain in the 1920s, the governments agreed that London could continue to use three Irish naval bases. They were only returned to Dublin after the Second World War.

It should be pointed out that the Ministry of Defence officially denies that any alternative sites for Trident are being looked at. The policy remains that the nuclear weapons will remain in situ, with a MOD spokesperson responding to the recent revelations by saying ‘The UK is strongly committed to maintaining its credible and independent nuclear deterrent at HM Naval Base Clyde, which exists to deter the most extreme threats to the UK and our Nato allies.’ The lexical choice here says quite a lot; the word ‘independent’ implying that Trident should not be seen as a constitutional issue, but one of general security of the British Isles, and the reference to NATO gently reminding Scots that they have responsibilities within broader security frameworks.

Indeed it’s worth remembering that the British security establishment will have a clear strategy with regard to defence and Scottish independence – along the lines of avoiding a UK break-up at all costs. The fact is, Scotland is integral to current UK defence policy, and it suits the MOD to have its nuclear weapons stationed in Scotland. The remote, sparsely populated territory (particularly the Highlands and Islands) provides the ideal military playground. Missile defence systems are tested in the Hebrides and the UK’s only naval firing range is in Cape Wrath.

The ‘northerly latitude’ of the country has also been cited as strategic for Britain, with an Economist article last year stating that its location is ‘ideal for projecting air and naval power into key Atlantic sea lanes and bastions of Russian power in the High North’. The same piece outlined how typhoons could be launched from RAF Lossiemouth in Moray to tackle ‘Russian bombers from Murmansk that approach British airspace’. As fantastical as all this may sound to anyone with a basic understanding of current Russian foreign policy objectives, the ‘Russian threat’ continues to feature in the planning of the British military, who sadly have yet to shake off the dust of the Cold War era.

Given the British establishment’s opposition to Scottish independence and desire to retain Trident in Scotland, it’s worth drawing our attention to the question of why this ‘leak’ by the Financial Times took place now, and who benefits? The fact is over 8000 people are directly employed at the Faslane and Coulport sites, with some estimates that around 19,000 people’s jobs depend on the nuclear facility north of the border. It is said that the number of MOD staff in the Argyll and Bute region accounts for around 34% of the total population. That is a significant proportion of locals employed by the British government.  It may therefore be in the UK government’s interest to highlight to these people now the real possibility that Trident will leave Scotland, and thousands of jobs will be lost. Could this have an impact on voters in the region and elsewhere in Scotland? Would they be less inclined to support the SNP and an independent Scotland as a result? Quite possibly.

Having said that, like much of Westminster’s recent attempts to persuade Scots to reject independence, it’s too little too late. The SNP candidate for Argyll and Bute took a comfortable lead over the Conservative party candidate at this year’s election, suggesting locals in the area are not as fond of Trident as some may like to think. The independence ship has already sailed, and the UK government, preoccupied with Brexit, wasn’t even there to see it leave. It looks like London will indeed have some thinking to do over what to do with these pesky nuclear weapons.

Scotland will be independent!!

The party driving Scottish independence is being destroyed from the inside by it’s current leader Sturgeon. She will be well rewarded by London for prolonging the Union. TEP.