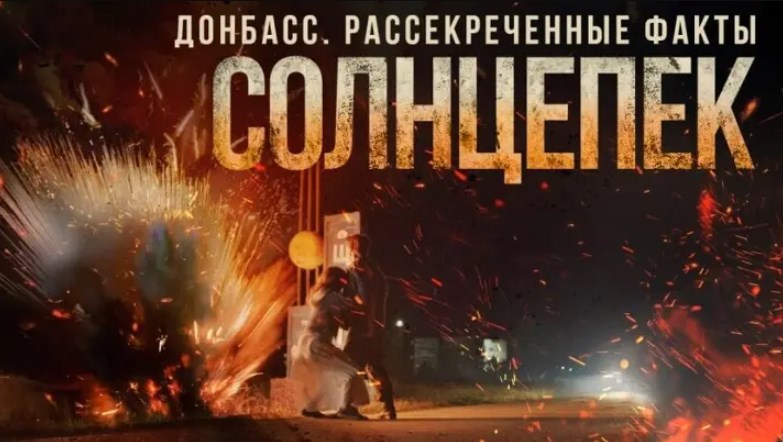 SouthFront presents to your attention the Russian war drama ‘Scorching Sunlight’ (Burning Sun) with Englsih subtitles. The film released in 2021 tells the story about the conflict in the region of Donbass in 2014. The translation of the film is taken from Telegram channel ‘Juan Sinmiedo/Fearless John/Ukraine exposed‘.

‘Lugansk region, May 2014. The Novozhilov family, by chance, finds itself in the thick of events in Lugansk. Vlad Novozhilov is a former participant in the war in Afghanistan. He knows firsthand what war is. Having seen enough of the horrors of war in his time, in principle he does not even want to touch a weapon. In a situation, he sees only one way out – to leave the country. But you can’t run away from the war, the border is already closed. To save his family, he will have to make difficult moral choices.’

Why does that Vovk look so much like a woman who used to pole dance?

Am I the only one who thinks Vovk was pole dancing?

Homosexual weddings were first legalized in Communist Russia before they were banned again in the late 1920s, early 1930s. You are deliberately excusing jewish propaganda’s corrosive effect upon the population, while excusing the kikes that are behind such filth in the first place.

Many girls from his Georgia were pole dancing.

AM Hants
Reply to  Hans

Wasn’t he Georgian? Your point?

Deep! The inhumanity of the war is well presented.

It’s propaganda and you lack the ability to question the heinous lies you’re told.

It absolutely is the Jews
Reply to  Hans

Better go to a German brothel.

You know nothing more than the cartoonish atrocity propaganda that isn’t supported by any forensic report, or anything that Hitler had ever written, and no government document from the Third Reich. There are many post-war forgeries used at Nuremberg, including scientifically implausible confessions extracted by threat and torture.

If you want to fool yourself, go ahead.

Says the idiot that excuses 66 million Russians killed by bolshevik kikes that conquered Russia and exterminated 15 million Germans after WW2.

“So little pains do the vulgar take in the investigation of truth, accepting readily the first story that comes to hand.” — Thucydides

What? But that girls from Khrushchev and Stalin’s birth town or village place are still earning money by pole dancing?

AM Hants
Reply to  Hugh Jorgan

Feel the same about the Government (all parties) of my nation and the masses who still believe them and the media. Sadly it was the same crowd who created the Bolshevik Communists and the National Socialists, that are running things today. Same script, never changes, century to century.

I feel asleep already in the beginning of this propaganda film so I missed it, will I get my Soviet bread ration or will I be punished for not obeying krimlin dictatorship?

Yeah, hope you enjoy Mongol cock. You mindlessly accept what you are told like the good little slave you are.

The socialist fraternal kiss was a special form of greeting between socialist leaders https://www.youtube.com/shorts/8H_y5YRwJEs

Before invading the Soviet Union, the German authorities set up special units meant to secure the area behind the German front. Orthodox historians claim that these unites called Einsatzgruppen primarily engaged in rounding up and mass-murdering Jews. This study sheds a critical light into this topic by reviewing all the pertinent sources as well as material traces. It reveals on the one hand that original war-time documents do not fully support the orthodox genocidal narrative, and on the other that most post-“liberation” sources such as testimonies and forensic reports are steeped in Soviet atrocity propaganda and thus utterly unreliable. In addition, material traces of the claimed massacres are rare due to an attitude of collusion by governments and Jewish lobby groups. This is only Part 1 of the 2-part set.

Better go to the Neapolitan brothel. There you will find your truth.

I think this movie convinced Putin to attack Ukraine )))))))))

The Lord of the Pimps
Reply to  tut-tut

He should rather publiced his army, which the Ukrainians have constantly raped. Gay prosecutor already knows everything. Given that he was appointed by Lula and not by Bolsonaro, this is not surprising.

Amazing movie.. congratulations to the producer… it shows the real face of the Ukronazis

This is a true portrayal of the US/UK funded barberism employed by the proxy Ukrainian murderers of civilians in the early months of the US backed Maidan coup.

The Ukie torture of the Donbass from 2014 to the current days included AZOV immolating a DPR freedom on a flaming cross near Mariupol in 2014. AZOV published the video of the heinous and cowardly crime.

The multiple pro US/UK narrative that ‘Hans’ has posted about this movie have all the hallmarks of a professional anti Russian troll.

The US and UK both funded and trained ISIS in a covert way and the UKIE extremists are the tool to create mayhem in the Ukraine. It’s a ISIS 2.0.

I give credit to the film makers and the platforms that are courageous enough to publish the TRUTH.

So the Guerrillas of the LPR /DPR actually killed US Servicemen in 2014 ??? Where is the source for this information

But at least they weren’t raped. Only the killed. Finally, there are actual events recorded by Ukrainian soldiers raping POWS and those videos are now in the office of the Brazilian gay prosecutor. How many victims will be willing to testify before a jury and gay posecutor?

Easy to find the information, starting with the reasons that Merkel legged it to the Kremlin, to beg for a ceasefire. Check out events in the Cauldrons, back in August 2014 and the losses at Donetsk Airport. Graham Philips, the UK Journalist, that the UK have sanctioned and exiled, covered the stories with many videos and well worth watching. RIP Givi, Motorola, Alexander Zakharchenko. Though, doubt you will bother. Also, the US Forces that were captured on video and speaking in English and with an US Accent. Many of us, excluding the trolls, on this site, have been following events in Ukraine since 2014 and remember events, seriously well.

Florian Geyer
Reply to  AM Hants

Very well said, as always, AM. The ‘context’ of Ukie barbarity that you saved in 2014 is still very important today.

Reminds me of watching events on 2 May 2014, Odessa Trade Union Massacre. Cannot comprehend how the UK Government is one of the main supporters and cheerleaders of the savages who embrace the genocide of Eastern Ukraine.

Hard viewing, the film, but, so must be viewed by as many as possible..

Florian Geyer
Reply to  AM Hants

Yes, the medieval barbarity of Ukranian thugs is orchestrated by the NATO snakes, in particular, the UK, US, Poland and Estonia etc.

Slightly off topic, from the article, but, I was noticing today, that the nations in the EU that wanted to go full Nazi, with regards treating the Russians, as the Nazis treated those of Jewish Faith, back in the 30s/40s, are the same nations that have teamed up for the 3 Sea Initiative. The 12 nations that border the Adriatic, Baltic and Black Seas.

What is there problem with Russia? Why do they seriously believe they can compete with the Belt and Road Project? Why are so many of those who went through the WEF ‘Young Global Leaders Academy’ so dense? Single digit IQs, psychotic narcistic sociopaths with political demands seems to be the primary qualities of those politicians and institutional executives. The Kinder Fuehrer from the days of Operation Paperclip.

The Lord of the Pimps
Reply to  Florian Geyer

In the Middle Ages, men were raped?

Pull your triggers on the Ukro-niggers!

The point of this presentation is what ???

It’s NOT a documentary.

So how is this different than a Stallone or Chuck Norris movie or any other PROPAGANDA film produced in Hollywood ???

Putin needs to send his Russians for medical checkups and STD tests. Because Ukrainians love sex too much.

The film is , in effect, IS a Documentary. I have closely followed the events of Ukraine since 2014 and the horrors of the NATO funded armed, trained Ukie terror forces are well documented.

A comprehensive documentary of ALL the Ukie war crimes would literally take YEARS to view, with more war crimes being committed by the Ukies every hour of every day.

What gets me is the ignorance of the UN. What is the point of the Rockerfeller controlled UN? Back in 2014, when the novelty of Ukraine was wearing off and the EU were tiring of the sanctions of the time, the MH17 false flag went down. Again, the novelty of Ukraine is wearing off and the truth is getting out. So again, they need a major false flag, to keep the masses focused. As they hope to take out the nuclear power plant, with the blame going to Russia.

Which takes us back to the UN, ignoring the special meetings, with regards the power plant. How long has Russia been asking for an inspection and still nobody wants to check it out?

Then you go back to 1994 and Rwanda. It took the UN 2 decades, before they apologised for failing to recognise the genocide of 600,000 citizens of Rwanda.

The same UN, who exonerated Slobodan Milosovic from all charges laid against him, years after he died in a cell in The Hague.

The movie was a loose composite of events that actually happened. So the twits below bad mouthing it as propaganda are not only lying, but worse, too lazy to do a simple Google search to refresh their failed memories. https://www.amnesty.org/en/latest/news/2014/10/ukraine-forces-must-stop-firing-civilians-after-nine-killed-donetsk/

NDR7652
Reply to  It absolutely is the Jews

This is true But if you changed the flag of the characters what would it be called then.

amnesty should rather take Ukrainian women out of brothels.

AM Hants
Reply to  It absolutely is the Jews

Their daughters are in a German brothel with twenty old men.

A gay prosecutor appointed by Lula da Silva already has more than three hours of tapes proving that Ukrainians are having rape Russians.

You can steal Mikhalkov’s film titles, or at least plagiarize them, but you can’t steal his art.

A bit reductive in the evolution of the characters, one must lose everything to commit, the other must have nothing to give up. The bombings seem a bit too coincidental but it’s a film that wants to take us somewhere. The wheat field at the end may be symbolic but it’s still annoying after the surreality of the rest, where are they going like that, in the open? (Ah and the subtitles are sometimes incomprehensible.) But these are only small annoyances that help to distance oneself, because this film hurts, is cruel like war. I would obviously have more to say but to cut a long story short, this film answers. To what? Our fear of one day having to make these choices. Thank you for making it available.

More fake tv brainwash for the idiots to watch