Wow: Almost every indicator having collapsed over the first 6 months of this year, market ‘pros’ just act as though it isn’t happening

The article is originally appeared at The First Rebuttal:

According to an article today from Bloomberg, 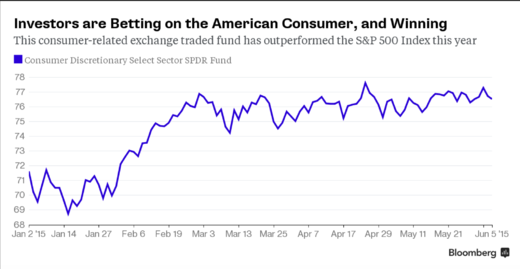 Now quite clearly the claim and the chart are both ridiculous but that said, this brings up a good topic. The Almighty American Consumer. 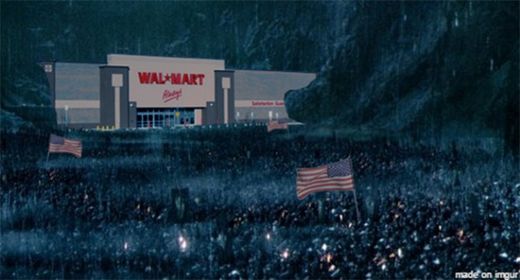 It is nearly impossible to comprehend the amount of shit that has been purchased, consumed and discarded only to be purchased again by Americans over the past 50 years. But, what we know is that no other creature demographic in history has consumed anywhere near the amount as that of the Almighty American Consumer. But can a level of consumption stretching so far beyond their means continue indefinitely? Well isn’t that just the $64K question, eh??

Given we are using all the same models and benchmarks as before it would seem that the assumption is the American Consumer will simply shake off the brutal right hook and knock down blow of 2008. The problem is, and anyone who’s done a bit of boxing knows, things can look very different after taking one to the back of the jaw. You might want to get back in the fight and even have every intention to stand up swinging, but sometimes it just doesn’t feel the same. Your balance is off, you’re a bit dizzy and your legs seem to have turned into spaghetti. This all starts to affect your psyche. You begin questioning if you can win this one, hell if you even want this one. And once that creeps into your psyche it’s over.

Well think about the American Consumer. 90% of us still have 40% less net worth than we did before that right hook and those still working are generating 10% less income. Demographics are pushing the baby boomers into ‘retirement’, which today just means working for no benefits and minimum wage in order to undercut the labour wages of a younger worker who is not yet on medicare. Then we have the middle class struggling to stay ahead of the hyper-inflating healthcare, education, rent and food bills. Move on to the millennials and recognize this generation was just getting started when the American Consumer ate that knock down blow. They watched families and friends being evicted from their homes during the very life stage their value systems were being developed. They understand that the chaos was a result of being overextended with credit facilitated by false assumptions that ‘things’ always move in the right direction. Finally, we have the 50% of American Consumers now reliant on government stipends for some or all of their consumption.

And so we must ask, are we to assume that the Almighty American Consumer is the same fighter they were before eating the, still recent, economic haymaker? Time will tell, it always does, but can we see any signs of wavering? Well let’s go right at it, what do honest consumption figures tell us? By honest, I mean let’s look at personal consumption growth but let’s filter out growth in auto loans, student loans and increases in government welfare to consumers. 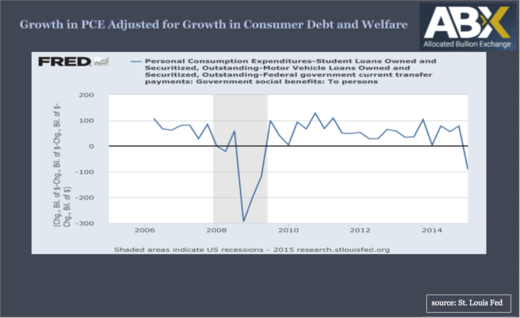 What we find is that despite the ‘incredible improvement’ to unemployment statistics, earned rather than borrowed or government sponsored personal consumption expenditure has been trending down for 5 years and has now gone negative. And this doesn’t filter out revolving credit or it would be even uglier. Now when was the last time we saw this go negative? You got it Pontiac! 2008.

Well surely that’s just an odd coincidence, right?? Ok but maybe it’s just my funny math playing tricks with debt and welfare. What do things look like upstream? For instance, what are we seeing in factory orders, which side steps the whole debt and welfare funniness? 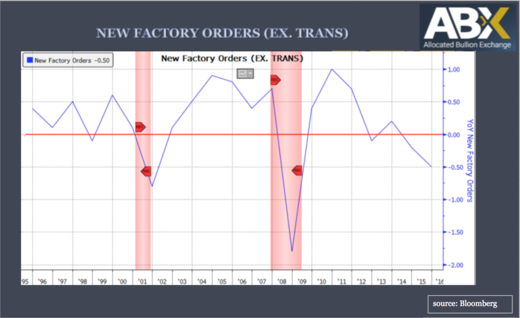 Hmmm now this is getting a little disconcerting, no? Last time new factory orders turned negative was……. 2008! Might be on to something here but is there anyway to really be sure?

Well the entire monetary system is set up to inflate. In fact, we’ve been told now for 100 fabulously devaluing years that if we are to get any kind of growth it is essential that we see inflation. And if there’s one thing nobody can fault the Fed for is not doing one helluva job printing the sh!t out of USD over the past 6 years ($13T). So, we should see ‘official’ inflation just humming along like a song. Let’s have a look. 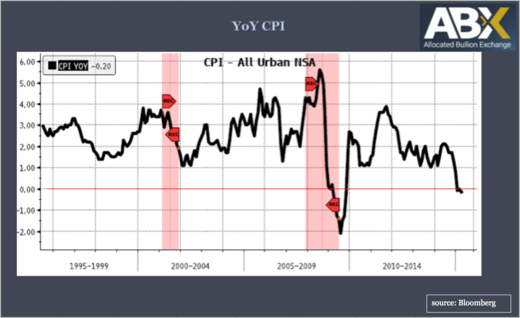 D’oh! So official YoY CPI has been trending downward since 2010 despite the ridiculous increases to M2 money stock and it actually just went negative. And don’t look now but yes, the last time it went negative was in 2008. Now sure we all know there are games played with CPI but the fact that it just crossed into negative territory is definitely a signal that discretionary demand is dead.

Thing is we’ve been treating the economy as though the American Consumer just needs a little time to get back to its old self. I mean listen to the pundits. From talk of an American capex renaissance over at BMO to guys like Erik Ristuben, chief strategist at Russell Investments who stated today on CNBC that “he believes the economic data will continue to improve”. Continue to improve??? What f**k’n economy are you looking at man? How can you even say that with a straight face?! 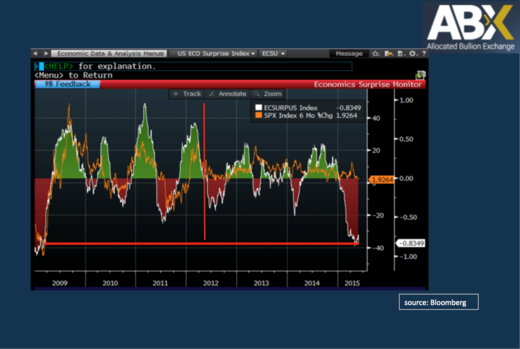 It just blows my mind, that in the face of almost every indicator having collapsed over the first 6 months of this year, market ‘pros’ just act as though it isn’t happening! It’s bloody impressive to watch the insanity, the denial, the delusion, that has become the basis of the steady state market. It’s like we are hiding behind our index finger, assuming because we refuse to see around it that there is nothing beyond.

What IS continuing is us extending ourselves again on the very assumption that the American Consumer will rebound to its peak strength. But what if, god forbid, we happened to be relying once again on a false assumption? Where does that leave us?? Well I expect there are more than a few millennials that have memories seared in their psyche of being thrown out of their homes, acutely aware of the fear their parents were trying so hard to conceal, who can remind us exactly where this all leads. But because there are those few all powerful economic cannibals that profit on policy rather than economics, we will continue down this flawed path until the legend of the Almighty American Consumer succumbs to the reality of one that is wearing its lumps. And that day my friends will be an ugly one for the record books. Keep your assets on a very short leash these days.

Brawling Over Vaccines: Export Bans And The EU’s Bungled Rollout