On October 8, the Royal Saudi Air Force hit carried out air strikes on a crowded funeral ceremony in the Yemeni capital, Sana’a, killing at least 140 people, according to UN sources. Over 500 people were reported injured.

At least nine air strikes were made on Khamis street in the southern part of Sana’a, excluding the fact that the incident could be described as a mistake. Pro-Houthi sources say that Saudi Arabia massivelly bombs Yemeni civilian objects in order to “counter” constant loses on the ground and de-facto failure of the intervention into the country.

The funeral was for the father of the interior minister in the Yemeni government, Jalal al-Roweishan.

Meanwhile, non-UN sources report that the casualties from the bombing have already grown to 450 killed. Some sources even say that the numbe is up to 700. There are no doubts that the officially confirmed number of casualties will rise 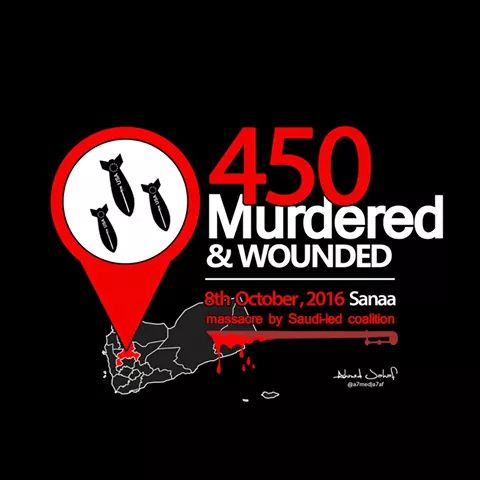 Photos from the scene (we excluded numerous photos with killed locals; they can be easily found in the Internet): 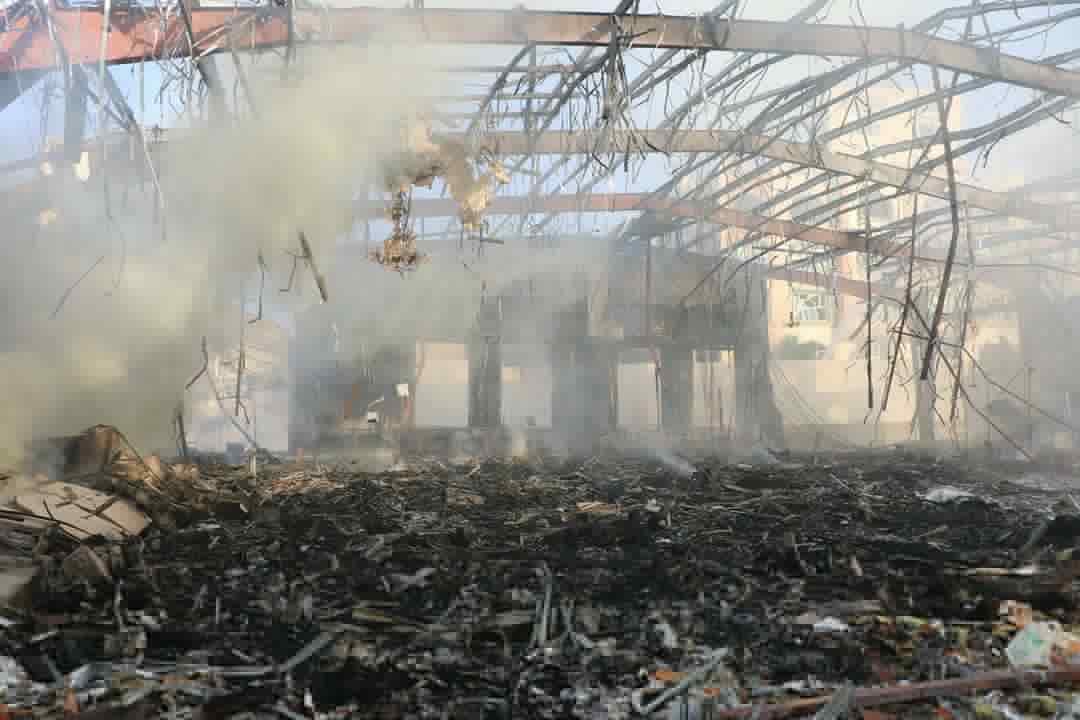 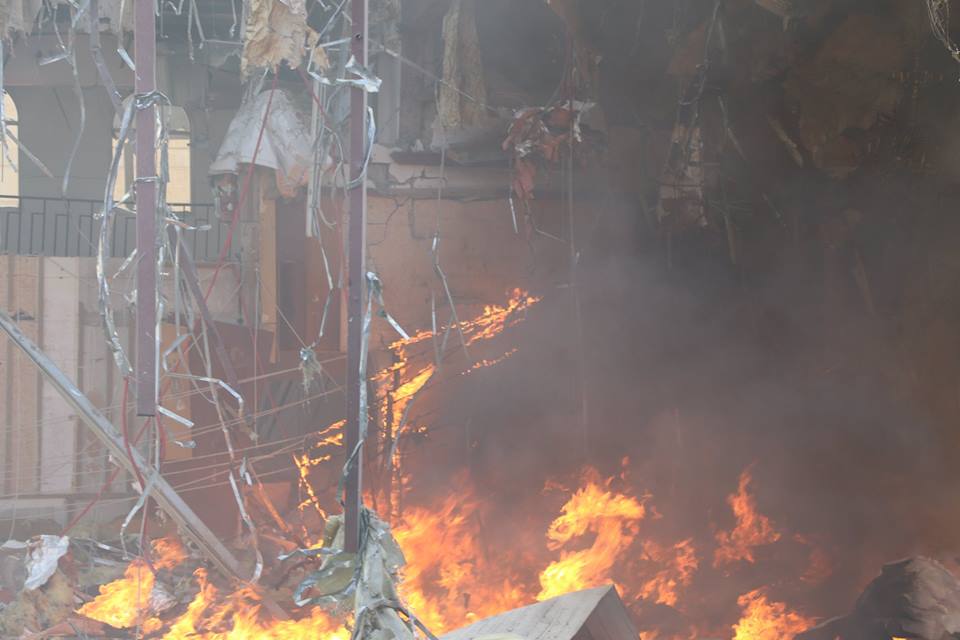 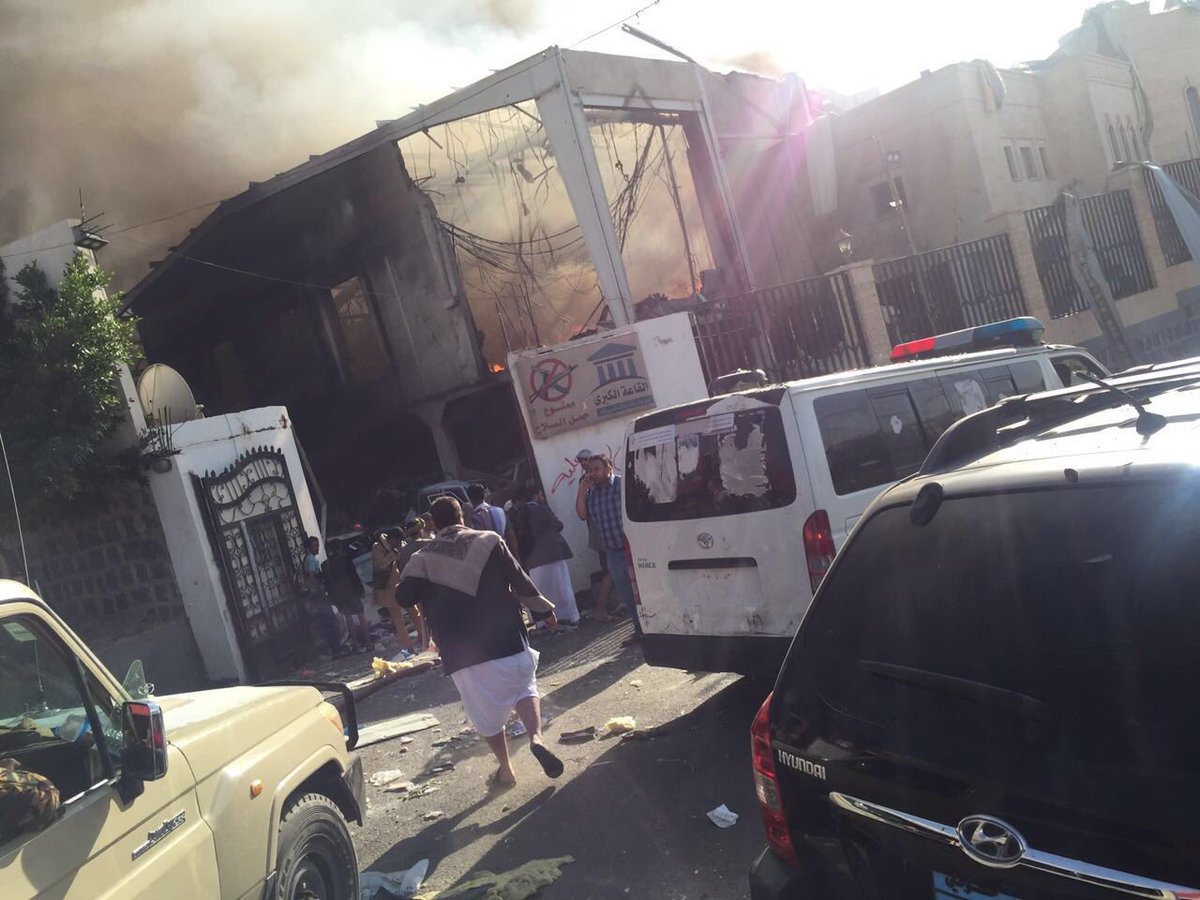 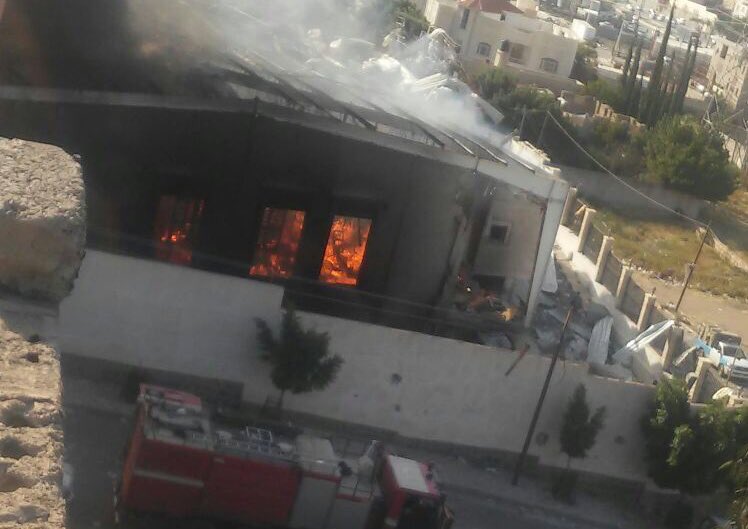 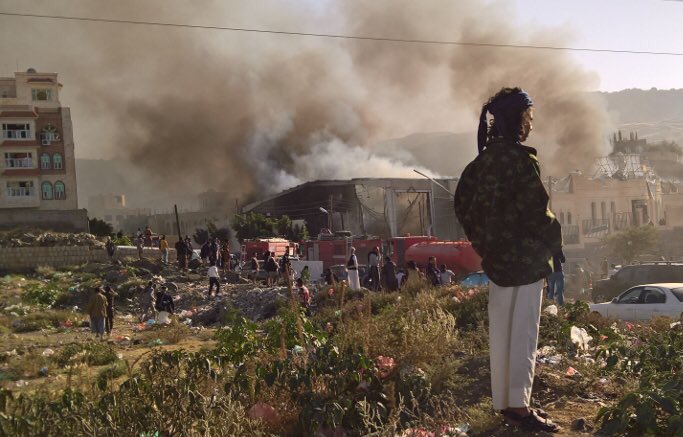 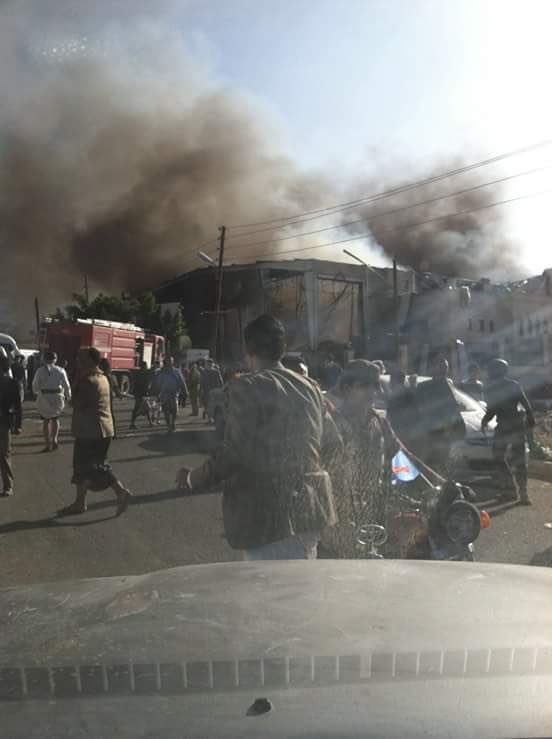 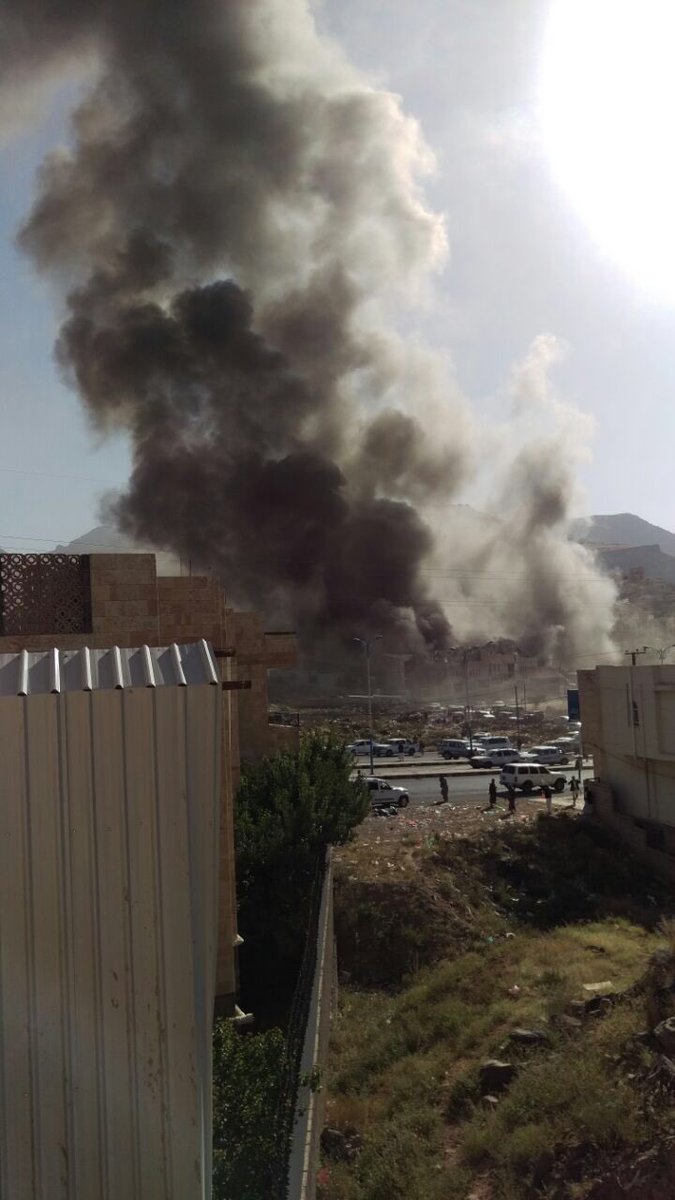 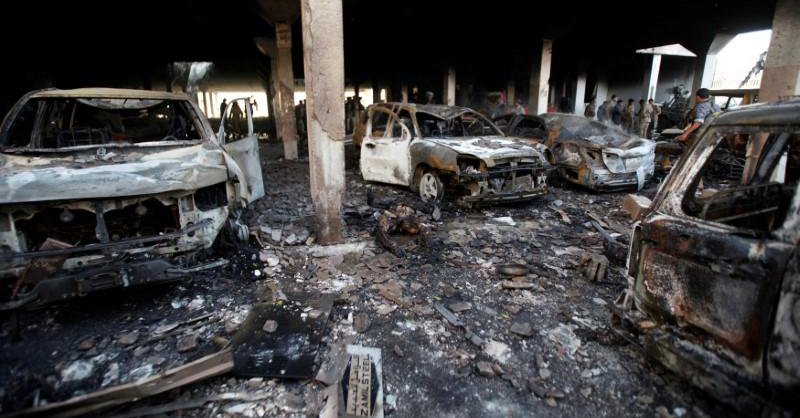 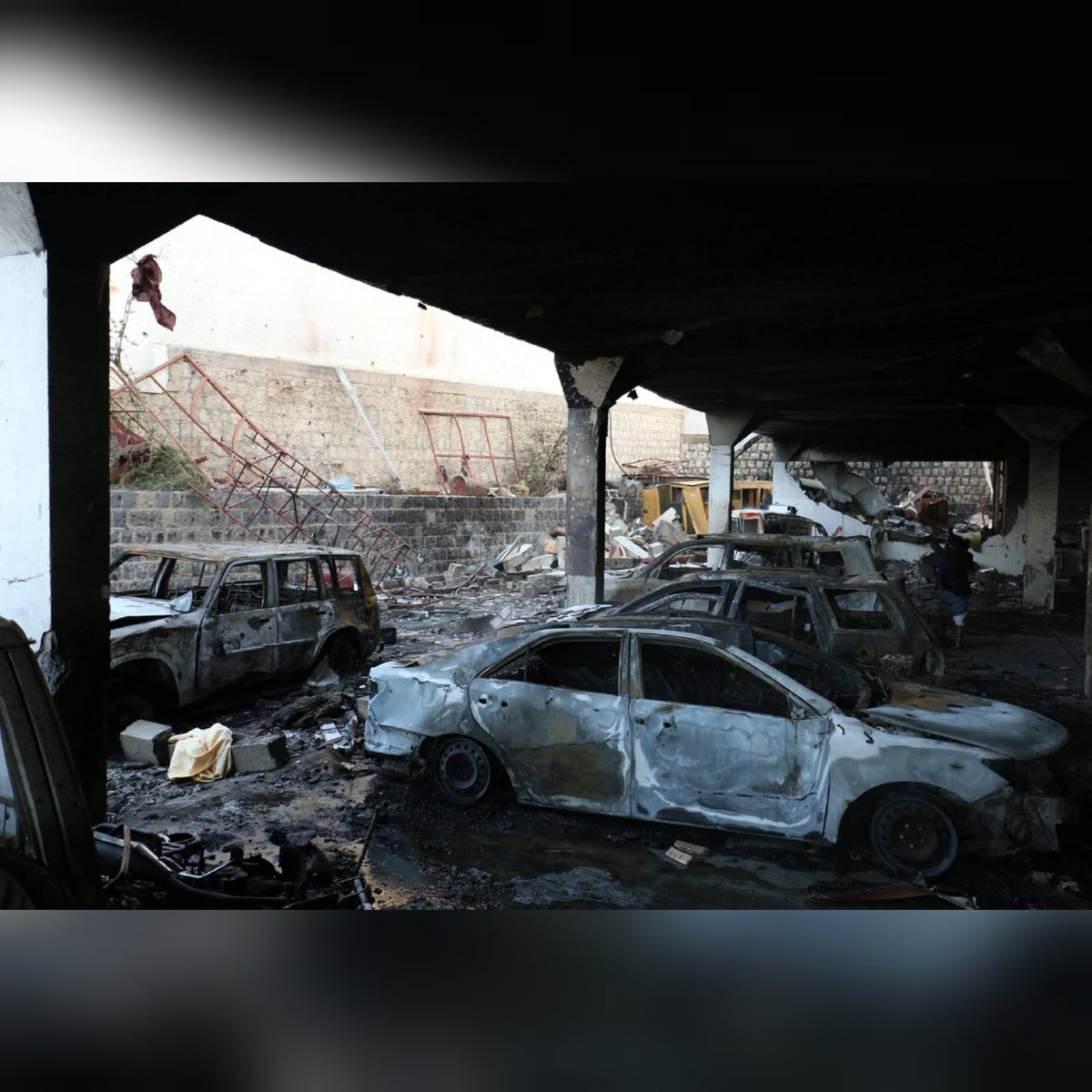 Saudi Scum! How long will nations be silent of these war crimes? These A holes need to be held accountable. Where is justice? The so called leaders of my nation side with evil. It’s so wrong.

Saudi/US are good in bombing hospitals, weddings and now funerals.

teacher must be proud of the student

this is a good docu to understand saudi better. you will get the answer why saudi armies always run away. https://www.youtube.com/watch?v=3nlfcXBmM4E

The ugly truth is what kind of f… intelligence, (turd brains) made this air attach possible in the first place, that is what I want to know, whom gave the orders. I know of several Intel Orgs whom is operating INSIDE Yemen as we speak, the Boris The Clowns imperial army’s are there, the Yankenits, of course, and the French scums, and remember this is also about Ethiopia and so on, not just confined to what the Saudis want, but everybody else than the Yenemit people, weird isnt it, made to be strangers in their own land. The western and the International silence and simply ignoring whats been happening in Yemen for years, the hypocrites are even shameless in their whining about Russia/Syria. Where are the images of children been blown to smithereens Yankees, huh, so the White shining armored knights can ride in. The propaganda Yankistans have with following images, where several was simple petty fakes, this one is real, scums, wanna drool over war porn, huh, I dont think the people of Ameristan gives an shit, nor care at all, this are just back ward ignorant Yemenits and on top of it, Muslims. So what, right. They make me wanna puke.

The Saudis/Yankeestans minions put their puppet in Yemen, in an so called “election”, thats why the rest have crumbled since and why on earth arent anyone helping the Houtis and other in their fight against Al-queda and so on, another staggering paradox. huh

The Yemenits have all my hart and soul with them, and never forget this Yemenits in the darkest hour out there in the mountains. Our Creator ONLY allows killing when it in self defense of you nabour/people and your country, and rest for sure that mercy is with you all the way. Behave with eloquence, be wise, have mercy when mercy is been shown, and an prisoner is not an soldier anymore, and then be careful with what you do, the doctrine of self defense is gone when you stand infront of your enemy whom have surrendered. Never forget that, but let it be your guiding light in your fight against the devils. That is what defines an true Muslim.

Love Life, respect everything and tread lightly and live in peace, and you have absolutely nothing to fear other then fear it self. Our creator, is love and mercy.

i heard iran is now trying to intervene through the UN. they ask Mr Ban (a very power hungry corrupted man, yes he is preparing for the korean president election as a candidate). i have my doubts that Mr Ban will not allow iran to serve humanitarian aid under to yemenis under the name of UN. without UN support iranian humanitarian aid airplanes will not have the guarantee of surviving that trip. i really don’t know what to do. russia can’t use UN. the only country which could give humanitarian aid would be china. with or without the support of the UN, china is mostly the only country who could manage this without being shot down by the saudi alliance even without the support of UN. nowdays china is really really quiet. too quiet. it seems like china is not a world power anymore. russia and iran should figure out a way to unlock chinese stealth mode. if the houthis really want an end of this madness, they should just go deeper inside saudi. they should destroy as much as possible along the saudis westcoast. that is the only way to stop this madness on their own. i mean what do the houthis have to lose more… they won’t have foreign military support. yemen is being block 3D. no air no sea no land transport is possible. their possible allies like iran and russia can’t stop the crazy saudi alliance to stop this invasion. china is in a stealth mode. the only card and the best card is the houthi alliance. so i only can say go for it.

the houthi alliance need to push further inside saudi and not only in the border area of saudi. with destroying military posts belonging to saudi the houthi alliance will not reach any goals. what they need to do is guerilla warfare in the saudi’s westcoast area. there are a lot of mountains in that area. they should use that as their advantage. go there and destroy saudi’s infrastructure wich will hurt saudis. saudi did really spend a lot of money in the syrian operation. i mean they had a bigger military budget than the russians. the saudi won’t be able to continue to operate in syria and yemen if they have more financial problems. even now their economy is suffering from that. ok they do have more to spend, but everything they are spending more will effect it’s economy. and there are no hopes anymore for the saudis to get their investments+profit back from operation syria investment because they failed to create a proxi regime in syria, which was planed to pay the saudis back.

there is only one realistic way to stop saudi invading yemen and that is a heavy blow in their infrastrucutre along the westcoast.

The suadi’s bombed it on purpose because they knew other gov’t officials will have attended. What do you expect from head chopping pyschos who treat their own people like shit.

Surely these must have been Russian planes on their way back from bombing hospitals.

If this would have happened in Syria the us would be claiming they had the right to invade to stop it. When us allies do it the us won’t so much as halt weapon sales to them, much less do something to stop it.

what a war crime by Saudi. Evil empire still supply arms and intel to the monachy.