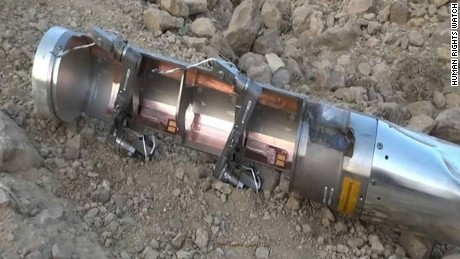 The London based human rights group Amnesty International said that they had the evidences that Saudi Arabia used internationally banned US-made cluster bomb on Sana’a in an air assault. On January 15, the human rights organization expressed that on January 6, a Saudi air assault with banned cluster bomb was dropped in Sana’a and that attack killed a 16 year old boy and injured more than six civilians.

On the other hand, the Saudi military spokesman, Ahmad Al Asiri claimed that its military used cluster bombs for once in an air attack on Yemeni province of Hajjah ninth months before.

The UN human rights office said in a different occasion that it received reports of Saudi cluster bombing in Yemen. 29 cluster bomb evidences were found in a single village by a UN team. Ban ki moon, the UN secretary general, expressed his concern on civilian loses caused by Saudi Arabia in Yemen. On January 8, he said if Riyadh use cluster bombs in Sana’a, it can be considered as a war crime committed by Saudi Arabia.

Though by Saturday, Saudi Arabia resumed its air assault in Yemen. In retaliation, the Yemeni army and the rebels have launched counter rocket attacks on the Saudi military position of Al Khadra and Khabash of Najran Province of Saudi Arabia.

According to some intelligence report, more than 7500 people already killed since the air assault was first carried out on March 26, 2015 against Yemen. And that Saudi aggression has injured more than 14000 Yemenis till today.

And will never be held responsible just like Israel..