According to Prince of Saudi Arabia, Turki bin Faisal al-Saud, a possible deal between the US and Russia on Syria will turn into a real “disaster.” 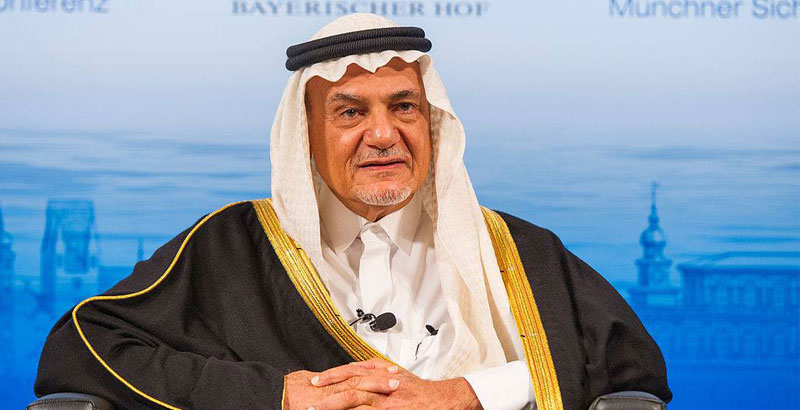 Former head of the intelligence service and Prince of Saudi Arabia, Turki bin Faisal al-Saud, warned US President-elect Donald Trump against a deal on Syria with Moscow and Tehran, the Kuwaiti KUNA news agency reported on Wednesday.

According to al-Saud, if Trump decides to make a deal with Russia and Iran on Syria, it will be “the most disastrous thing that could happen.” He also added that since the making a deal on Iran, Iranian troops have been massively arriving on the Syrian territory and it has already led to deaths of many people.

He urged Trump to meet “with America’s friends in the Middle East” before his inauguration in January and then help them to stop “the biggest terrorist, Syrian President Bashar al-Assad.”

Al-Saud also appealed to Trump with a request “not to do away with the Iran nuclear deal” and stressed that he “would rather see that this nuclear deal becomes a first step in ridding the Middle East of nuclear weapons.”

It is too late old prince. By the time Trump visits you, you would be dead and hanging upside down from a lamp post in Riyadh

You forget the Turks. They think they are a super power and want to make Neo ottoman a reality.

The Turks are happy to chew on the bone Putin gave them. The Turks trust the Russians than they trust NATO members.

I don’t know. I’m pretty convinced that the “coup” was an internal job made by the dog. Apparently, it facilitated some political moves he could not do otherwise, and the invasion of Syria. I guess we’ll understand the position of Turkey a little better when the scum they accompany will get in contact with the SAA near Aleppo. But I don’t entirely discount the notion they could be trying to break the siege form the north as total fantasy. We already know that when these ones “fight” against ISIS, is pretty much a theatrical nonsense.

My view on the coup is, CIA had something to do with it, since Turkey was not willingly playing along with the US schemes. Erdogan invaded northern Syria because Putin agreed to the idea and allowed the Turks to deal with Kurds from linking south of the Turkish border. I do not see the Turkish backed FSA encroaching in the siege of Aleppo.

he’s right. For saudi salafists and wahabists it’s gonna be a disaster.

ErDOGan is going to try to kiss ### Trump and Putin for some land in Syria. I hope they give him the finger.

But some say Trump is staffing his cabinet with neocons and therefore the policies will be pretty much the same.

Love that kind of disastrous peace.

Can’t be any worse than the one Saudi dimwits have already created. Their economy is screwed and will collapse at some point.

hopefully, yes. Trump could bring America to complete energetic independence. The current EU leaders will go, Hollande and Merkel are going to be toppled by opposition parties candidates, who’ll put away sanctions and make big energy deals with Russia. It’s the only way to effectively end the threat of international terrorism – stop buy oil from Saudis and Qataris. Of course, all this would be easy and practical, but the jewish zionist financial power is going to do everything it can to impede the process. Although I may be simplistic and even naive in this comment, I believe that substantially this is it.

The Zionist financial power tries to bring their puppets in power to advance their agenda. Did you know that half of the Obama cabinet was chosen by Citicorp….according to Wiki leaks? Trump is not a Zionist puppet, and Zionist puppets made their beds with Hillary, and now they are on the sidelines…Like the Clintons are. Trump is going to replace Yellen and Steve Fisher, number 1 & 2 at the Fed, and have his people running the Fed; The days of easy money for the banks are gone, interest rates are going to go higher, and people will have a choice in investing their money in interest bearing instruments…..instead of being forced into the stock market.

Hmmm does that mean we will be paying higher interest on our 20 trillion national debt? It is a little more complicated than that. Maybe eliminate the FED and print our nations money which is interest free and rebuild our infrastructure providing jobs and education for evolving jobs in the new economy.

Yes, you would pay a higher interest to service the 20 trillion dollar debt, however, the increased expense would be offset by improved efficiencies in government spending ( in other words, getting more value for the money spent), an improved tax base since more people would be working and paying taxes, and at last resort a 20-25% percent haircut on Treasuries held by hedge funds and banks. The current fiscal policy favors the banks and the globalist view of running the global economy, content with a GDP growth of 1-1.5%. Eliminating the FED and having US government issue money should be backed by tangible assets ( gold) and not some presumption of reserve currency supremacy. The reserve currency status of the dollar allowed the US economy to atrophy from a manufacturing economy or a consumer economy in the course of half a century.

Their economy is solely dependent on oil. They have been burning their reserves at an alarming rate.

Plutocratic wahabist warhawk warns that if America and Russia make a deal on Syria, his favourite terrorists may be defeated and the legitimate government he hates may bring peace to the country.

“He also added that since the making a deal on Iran, Iranian troops have been massively arriving on the Syrian territory and it has already led to deaths of many people.”

What a despicable lying bag of shit…. It is Saudi support for AQ-affiliated terror groups and other ratbag Jihadi wahhibi foat-guckers that has “led to deaths of many people”….

Oh, how I pray for a 10MT air-burst over Riyadh… So much of the worlds evil could be eradicated by a single flash of glorious light….

KSA needs to understand the concept of “live and let live”..;

When you know Sauds is the most important nationality among mercenaries in Raqqa and that Qatar and Saudi arabia are the first sponsors of islamo nazis of the islamist state, you understand why they make in their pants ☺ Western leader decided to no more collaborate with Hitler and Sauds corrupted kingdom will be destroyed sooner or longer.

These Wahhabi lowlife pedophiles are not going to be able to play Mr. Trump like they have so many others. I want to see all members of the corrupt House of Saud burned at the stake and their heads on pikes. May they burn in HELL.