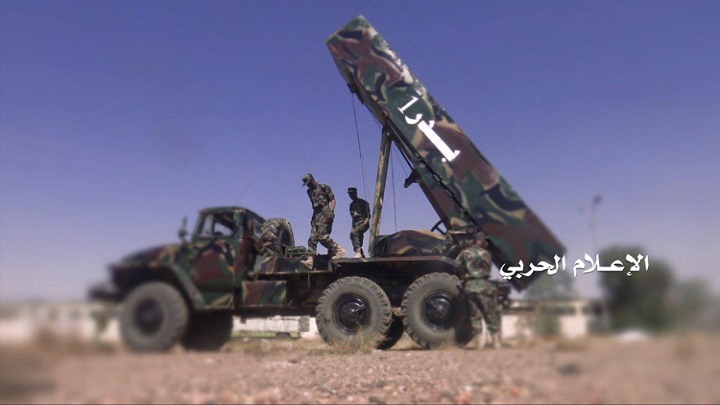 On July 29, warplanes of the Saudi-led coalition carried out airstrikes on several ballistic missiles sites of the Houthis in the northern province of Saada, according to the UAE-based al-Arabiya TV.

“We will not allow Houthi militias to possess military capabilities that threaten regional security,” the Saudi-led coalition said in an official statement.

According to the Saudi-led coalition, the Yemeni Missile Force [loyal to the Houthis] launches most of its missiles from Saada, which is well-known as the homeland of the Houthis.

Hours after the Saudi-led coalition airstrikes, the Yemeni Missile Force announced that it had launched a short range “ballistic missile” at a gathering of coalition forces in the province of al-Bayda. The “missile” strike appears to be a response to the airstrikes on Saada.

The Yemeni Missile Forces didn’t reveal the type of the “missile,” which was launched. However, experts believe that it was the locally-made Badir-1 solid fuel artillery rocket, which is a copy of the Iranian Fajir-3 rocket.

Recently, the Saudi-led coalition stepped up its aerial activity over Saada in an attempt to detect and destroy the missile capabilities of the Houthis. However, this strategy has failed so far.

New report out that SA coalition strikes missed the missile sites. But landed instead on Wedding and funeral gatherings.

We have seen many great leaders that they are now not present in this world anymore. They have went from this world without their own wealth, properties, thrones and relatives. Once a person die then nobody takes their name. It is like that he was never born in this world. This is natural phenomena but world leaders don’t think about.

Due to too much wealth they don’t think that their wealth, properties, Kingdoms, thrones, palaces even their souls and religions are actually belong to God and when God decide to take these back then it will not take too long. How much wealth and properties they have collected by corruption, brutality or deception with so much height and speed they will drop to the earth. God save us all from greediness and wrong decisions and end all wars and sufferings in this world. Ameen.

FFS, these missiles are sent up from mobile launchers, which (I presume) don’t hang around the launch site waiting for a retaliatory strike. So the crack U.S. intelligence gave the Saudis coordinates for what, exactly? A leveled dirt pad in the mountains accessible by road? Yeah, that should bring the Houthi’s mobile missile launchers to a screeching halt.

“Those bastards destroyed the gravel infrastructure at the only pad in Yemen. Damn it! Now we can’t launch any more missiles at Saudi Arabia (unless we drive to one of the other thousand ‘launch sites’ – or just use this one again).” https://uploads.disquscdn.com/images/c0075b23d6200e0cc42051d4ebc6dcaee551b4af68d6b9ec1fc50c2b7b7f7360.png

They also use underground sites, camouflaged and undetectable.

I always start by looking at the source, and in this case, it is UAE based Al Arabiya. I would not trust a single word from this propaganda mouthpiece. Coalition based media are nothing more than cheerleaders that repeat whatever script is handed to them – whether or not it is true is irrelevant.

I do the same, first look up the source. I stopped reading thete

You said “the houthis are going down in history as legends”

You absolutely don’t know that what gonna happened after one second. God knows better.

For three years they have bogged down a coalition that is supplied by hundred of billions of dollars of western and zionist weaponry on an isolated group in the most impoverished country in the Arabian peninsula. That’s already legendary to me.