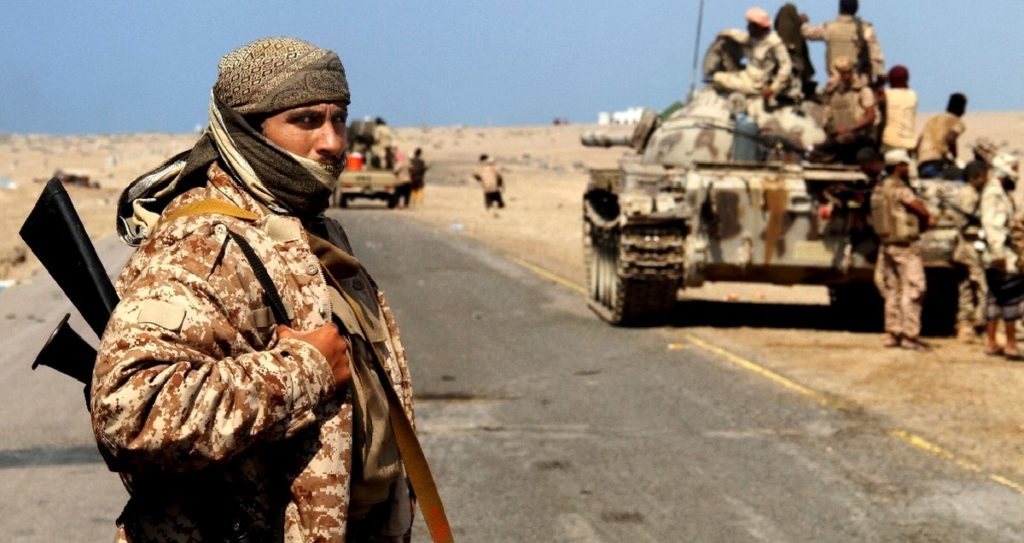 According to the report, as many as 14,000 Sudanese militiamen have been fighting in Yemen in tandem with the local militia aligned with the Saudis, according to several Sudanese fighters who have returned and Sudanese lawmakers who are attempting to track it.

Almost all of these Sudanese fighters, many of which children come from Darfur, where around 300,000 people were killed and 1.2 million displaced during a dozen years of conflict over diminishing arable land and other scarce resources.

The newspaper quoted the 16-year-old Hager Shomo Ahmed who said that “Families know that the only way their lives will change is if their sons join the war and bring them back the money.” He was only 14 when the offer was made to his family.

The report also quoted Hafiz Ismail Mohammed, a critic of Sudan’s government and former banker, saying: “People are desperate. They are fighting in Yemen because they know that in Sudan they don’t have a future.”

“We are exporting soldiers to fight like they are a commodity we are exchanging for foreign currency,” Mohammed said.

The NYT further reported the method at which they were commanded:

“To keep a safe distance from the battle lines, their Saudi or Emirati overseers commanded the Sudanese fighters almost exclusively by remote control, directing them to attack or retreat through radio headsets and GPS systems provided to the Sudanese officers in charge of each unit, the fighters all said.”

“The Saudis told us what to do through the telephones and devices,” said Mohamed Suleiman al-Fadil, a 28-year-old member of the Bani Hussein tribe who returned from Yemen at the end of last year.

“The Saudis would give us a phone call and then pull back,” agreed Ahmed, 25, a member of the Awlad Zeid tribe who fought near Hudaydah this year, he didn’t want his entire name published due to fears of government punishment.

According to the NYT, the Pakistani military also has about 1,000 soldiers to bolster the Saudi-led coalition, despite the country’s parliament voting to block its participation.

“Saudi officials said their soldiers have also died in Yemen, but declined to disclose how many.

The Sudanese ground troops unquestionably have made it easier for the Saudis and Emiratis to extend the war.

The Sudanese have insulated the Saudis and Emiratis from the casualties that might test the patience of families at home,” the NYT reported.

The Sudanese fighters also insisted that they were the main barrier against the Houthi, safeguarding the Kingdom.

“Without us, the Houthis would take all of Saudi Arabia, including Mecca,” the 28-year-old Mohmed Suleiman al-Fadil said.

“Sudan’s defense minister threatened last May to withdraw from the conflict, pointedly announcing that Khartoum was ‘Reassessing’ participation in light of Sudan’s ‘Stability and interests.’ Diplomats called the statement a veiled demand that Saudi Arabia and the United Arab Emirates provide more financial assistance.”

Furthermore, until recently Saudi Arabia and the UAE have reportedly been wary of Sudanese President Omar al-Bashir, due to his ties to political Islam and relations with Iran and Qatar.

“The war in Yemen has enabled Mr. Bashir to win at least diplomatic support from its Gulf leaders, and he has thanked the Saudis and Emiratis for pressing Washington to upgrade relations.

The Saudi payments to the soldiers have become increasingly significant to Sudan, where inflation has hit 70 percent and even in the capital residents line up for bread, fuel and bank withdrawals.”

The system worked the following way, according to accounts to the five fighters who have returned from Yemen and two brothers of fighters who had died in the intervention.

“Sudanese jets departed Khartoum or Nyala, Darfur, carrying 2,000 to 3,000 soldiers at a time to Saudi Arabia.

The Saudis issued them uniforms and weapons, which the Sudanese fighters believed were American made.

Then Saudi officers provided two to four weeks of training, mainly in assembling and cleaning their guns.

They were paid in Saudi riyals, the equivalent of about $480 a month for a 14-year-old novice to about $530 a month for an experienced Janjaweed officer.

Their payments were deposited directly into the Faisal Islamic Bank of Sudan, partly owned by Saudis.

At the end of a six-month rotation, each fighter also received a one-time payment of at least 700,000 Sudanese pounds – roughly $10,000 at the current official exchange rate.”

“Don’t fight harder than the money is worth, don’t fight more than you are paid for.”

RT cited a Saudi military spokesman who denied the government is recruiting children.

“Sudanese Foreign Ministry spokesman Babikir Elsiddig Elamin was more circumspect in his denial, merely commenting that Sudan was fighting “in the interest of regional peace and stability,” RT wrote.

Regardless if whether the reports of Sudanese children are fighting in Yemen, more than 85,000 local children are estimated to have been killed of famine and starvation due to the Saudi-led coalition’s intervention.

Currently, the humanitarian crisis in Yemen is the worst in the world, according to the UN. Efforts are on-going on finding a peaceful solution, with recent talks between the Houthi, the Saudi-led coalition and their proxy government in Yemen reportedly bringing success. Despite that reports of fighter and civilian casualties and attacks from both sides keep surfacing.

The Saudi scum are desperate as Sudan has stopped supplying cannon fodder after suffering over 3,000 casualties and riots in the streets. Now the Saudis lower than shit scum are recruiting dirt poor black children from Darfur for less than $50 a month and sending them straight to die without any training or proper weapons. The Saudi perverts are also abusing these poor children.

Sad you don’t have picture of this children soldier to provide. Without it it’s only rumors. Saoudians have pictures of Yemenite children recruited by force. Why el-Bashir cancelled his formal old alliance with Iran ? Why did he abandon Palestinian people ?

That’s being a bit pedantic. 1. Interviews with direct witnesses is enough for a conviction in a court of law, could they be lying, that does happen but the point is this is not merely rumor. The article quotes parents and Sudanese military personnel. 2. If you follow the NYT link, there are a few pictures. 3. Child soldiers in the M.E. and Africa are actually quite common.

No one should fall off their chair. The galling part is that the Saudis hold themselves up as being morally superior while we back them up in their absurd claims. The Saudis accuse the Houthis of using child soldiers while they pay for child soldiers. The Saudis claim their blockade is legal while their enforcement of it is illegal. Shooting up fishing boats is illegal, a legal blockade requires boarding and searching for weapons.

It makes no difference to the general ILlegality of the empire’s war on Yemen. There is no UNSC chapter VII resolution against Yemen. Saudi/UAE/US war crimes in Yemen are only a matter of degree.

The Talmudic-Zionist Cancer/empire will do as it wishes because the world is afraid of nuclear confrontation with the Axis of Evil (Israel/US/Saudi).

Jews are also organ harvesting poor black children from Haiti to Africa. The Saudi scum are organ chopping aka the unfortunate Mr. Khashoggi.

That’s true. Both Amnesty and HRW have accuse Israel of harvesting organs as policy. There have been three major Jewish organ gang arrests in New York and Ontario, two involving rabbis. Never a mention in the MSM that the perpetrators were all Jews.

One day, the truth will become sufficiently known that this disease can be eradicated.

Even the UN puppets complained about the Zionist criminal scum harvesting Haitian children after the earthquake. The Zionist parasites set up a “field hospital” to organ harvest children and then send the organs for rich ugly parasitic Jews in Americunt and European hospitals. The Swedish media was the first one to blow this disgusting practice wide open and then the Americunts vetoed a UN investigation into Zionist crimes as usual. Also the Jews are now totally involved in child trafficking and prostitution. Rabbis are in the management positions for white slavery from Balkans and Eastern Europe. Tel Aviv is the new Gold coast of modern slave trade. Google the sickening child abuse cases worldwide that Rabbis from Australia to AmeriKKKa have been involved in.

Yemen war is subject to western media black-out (to avoid reporting on ‘ally’ Saudi war crimes) and all Yemen’s transport hubs are literally blockaded by Saudi Arabian naval vessels and warplanes (logistics and maintenance courtesy of NATO). And you wonder why there are no foreign journalists running around taking photographs of Saudi activities to please you? Seriously?

Starve to death at home or eat and risk death fighting for the Axis of Evil (Israel/US/Saudi)……………poor choices for children born into this Satanic Talmudic-Zionist empire.

is the same for children every where in the west as it become, sudanese are also no exception. it is what western democracy produce tax slaves and poor people who have no choice.

It’s just going to get wore until the Talmudic-Zionist Cancer can be eradicated.

The Sudanese Children fighting in Yemen are in no way fleeing poverty as is commonly stated including by the article above, Sudan responded to the Western Sedition that culminated with the fracture of the first African State with a passion for Islamic unity, this was absolutely necessary since they were being attacked by Christian swine..

And if these child soldiers were mercenaries being sold by their parents, there would be ten times more coming from South Sudan, because this is one issue where there is a genuine bipartisan agreement with both Sudan and South Sudan in agreement with the Saudi Arabian invasion of Yemen.

Sudan embraced Salafist Doctrines wholeheartedly in order to preserve their Nation State and Saudi Arabia offered the Sudanese special privileges as guest workers and also in spite of there being no obvious benefits at the time King Abdullah stood behind Sudan during the schism.

A debt of gratitude is being repaid, it’s unfortunate that the the hypocrites of the present Saudi regime are being associated with the good deeds of King Abdullah in the mind of the Sudanese.