On July 24, the Houthis repelled a new attack by the Saudi-led coalition and its Yemeni proxies on their positions in the southern Saudi province of ‘Asir.

Houthi fighters managed to hold onto their positions in the outskirt of the city of al-Raboah in the southern part of ‘Asir, despite heavy airstrikes by Saudi warplanes. The Yemeni fighters also launched two Zilzal-1 improvised rocket-assisted munitions (IRAMs) at Saudi-backed forces gatherings in the region.

The Saudi media acknowledged that eight Saudi service members were killed in the Kingdom’s southern region on July 24. However, it remains unclear if they were all killed in al-Raboah’s failed attack.

The Houthis’ ability to maintain positions near a key southern Saudi city like al-Raboah is a major blow to the Saudi-led coalition. For more than four years now, the coalition has failed to secure the Saudi-Yemeni border, or even to push the Houthis out of the Kingdom’s southern region. 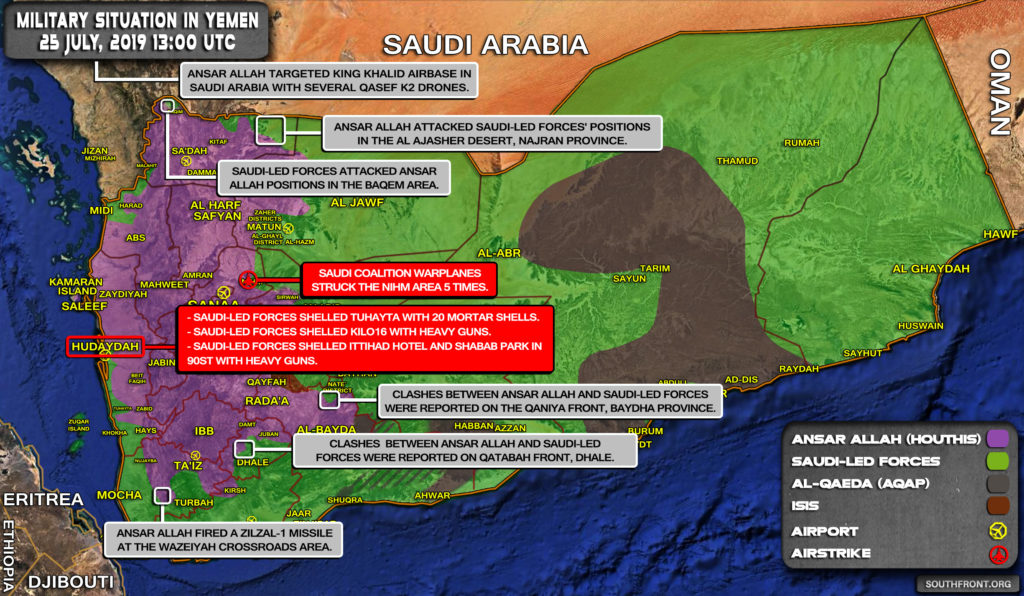 CENTCOM Commander: “Hmmm… you should probably attack the Houthis’ positions in the mountains. You should be able to kick their ass, right?” MbS: “Uh… I guess so… OK.”

I don’t know about the current Marine heading Centcom – McKenzie. Maybe this guy actually does recognize Saudi Arabia as one of the main enemies of the US and primary source of head-chopper funding. His secret scheme is to get the Saudis to destroy and bankrupt themselves in their futile effort to defeat the Houthis. The U.S. base outside of Riyadh is just to have forces nearby when the Saudi little people revolt and start stringing up the al Sauds on lightposts. The Iran war is fake – a ruse to distract the Saudis, UAE and Israel. Genius!

Wait… the heroin and crack are wearing off and my head hurts. Oh, sorry. It was just a crazy drug-induced hallucination. Imagine CENTCOM protecting and defending the US Constitution and not aiding our enemies. That’s just insane.

Your not far from the mark. Take another hit and come for a ride.

CENTCOM’s plan is to bring democracy to arabia!!! First we must let our corporations take all the arabian assets and ressources. Hell lets add roller coasters to the holy sites and call it dinseyland Mecca!

Once we seize, i mean liberate the oil and its infrastructure our debt problems will flow away, and everyone wil be happy.

Drunk Ivan trying to talk like a real Anglophone, heh?

And Wahhabi head-choppers will turn on the al Sauds, kill them and destroy Saudi Arabia themselves for desecrating their holy lands with foreign infidel armies. That Osama bin Goldberg guy was going to do just that until the al Sauds booted NATO armies off their soil before the invasion of Iraq. I guess the al Sauds and US Deep State saw fit to pay bin Goldberg a fortune after that to keep him busy killing infidels ‘outside’ of the Kingdom.

I wonder if that same scheme is going to work with rump al Qaeda or fake ISIS today? I’m guessing not – the current king can’t possibly be seen as a legitimate Custodian of the Two Holy Mosques with CENTCOM running around. I don’t know much about Islam, but I kind of think the Wahhabi head-choppers will figure it’s time to get the Ka’ba’s keys back from the al Sauds the old-fashioned way: https://uploads.disquscdn.com/images/e562131917ed2b4c40816a82a9f24affd2bf923f76699d0590ab103e5e1a0379.png

I think anyone with half of brain sees that the oil will be redundant in 20 years so they are trying to get the most of it, including your beloved Americans.

houthis will be the death of saudi arabia and MbS