On July 12, the Saudi-led coalition announced that its warplanes discovered and destroyed a “ballistic missile launcher” of Ansar Allah [also known as the Houthis] in the district of Sahar in the northern province of Saada. The UAE-based al-Arabiya TV released several photos of the launcher, which were taken by an “observation system” of the coalition. The photos showed what appears to be a launcher of the Yemeni-made Badir-1 artillery rocket. The Badir-1, which was revealed on March 22, is a copy of the Iranian-made solid fuel artillery rocket, Fajir-3.

In response to this threat, the Saudi-led coalition stepped up its aerial operations over Saada. However, the coalition’s efforts are still incapable of putting an end to the Yemeni Missiles Forces.

There are news that Houthis downed one or even two saudi jets today… ?

A tornado fighter jet went down the coalition has confirmed this. The other is an Apache helicopter was taken down.

Reuters has acknowledged the Coalition offensive has been a complete failure. Also, coalition troops south of the airport remain cut off and may have already been destroyed. Getting accurate reports on the situation in Yemen is very difficult but the nature of the coalition propaganda tells a story if one knows how to read between the lines.

It depends which side you ask: 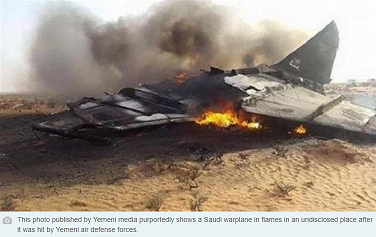 Great! thank you both for the answers

Your welcome. For your information, I have found Houthi media sources tend to be fairly accurate and can be for the most part trusted. However, they can get it wrong as was the case here. But that said, they showed integrity in altering the story to better reflect what really happened.

If the tables were turned, I highly doubt that media sources sympathetic to the Coalition would have updated their reporting – instead they would continue to push on the public the lie. I have found coalition reporting just appalling as flagrant reporting of lies seems to be the norm.

I have posted many comments that expose coalition media lies and so you should be wary of any claims they make.

I think Houthis have shot down the jet or may be due to technical problem or the pilot has done suicide.

Cheers, was wondering what the story with that was.

And we ran out of ‘camera film’ so we have no picture of the target being destroyed. But double fingers crossed we swear we destroyed it… we really did!

Meanwhile, the ‘destroyed’ missile launcher fires off another volley into Saudi territory.

Definitely. Without a doubt. We used the new US supplied deadly laser pulser cannon which is built by the same company that builds the Patriot Missile System so we know it works 100%.

After firing off the laser we observed a flash and then smoke and fire which caused a large peice of debris to fly off right past us with a trail of burning ash. The crew, clearly in agony, could be seen jumping up and down with rifles held above their head as the debris continued in the direction of Riyadh. The new Cannon must be very powerful to do that.

Mission accomplished, we headed back to base. Later we are informed a ballistic missile hit the Saudi Royal Palace in Riyadh. We offer our prayers and condolences but then proudly tell of our daring and courageous exploits that destroyed at least a dozen Houthi launchers leaving charred bodies everywhere.

The next day Coalition media report that air strikes carried out by courageous pilots of the glorious Coalition have successfully knocked out the ENTIRE Houthi missile forces. This follows the recent destruction of the entire Houthi communication network. Complete Coalition victory is imminent.

This video, censored by mainstream AND kremlin media outlets, shows a Cameroon death squad, trained in Israel, murdering two women and their young chldren ON CAMERA. This happened a few days ago.

While SF had a JEW puff-piece pushing the idea of the wonderful peace jews have brought to Africa, the reality is here for all to see.

This death squad happily filmed the atrocity for all to see, quoting the FACT that their jewish trainers likewise film and promote the sniper atrocities in Gaza, without any political backlash (indeed Putin even invited king Jew, the monster that gave the direct instruction for the jew snipers to mass murder, to Russia).

Jew media (including SF, sadly) chooses exactly what you get to see. So SF NEVER shows the daily atrocities in Novorussia, for instance.

This video is a billion times more important than anything happening in Yemen (the people of Yemen are doomed, given that EVERY major power on the planet are on the side of Saudi Arabia).

The jewish atrocities in Gaza are DESIGNED to set an example for every other depraved monster on the planet. Jews are only in Africa to do works of pure demonic evil. The jew trade in the SEMI-PRECIOUS stone we call diamond has always illustrated this.

Starlight, I appreciate your perseverance to get stories close to your heart out there so people can know, so I have some suggestions so your posts can make more of an impression – in a good way.

While it is generally known that death squads are trained by most great powers such as US, Israel, France, UK etc…, visual evidence such as this is uncommon. The video also appears to be legitimate (not staged to discredit) and the execution of women and child particularly disturbing. But:

(1) you need to better establish the connection to Israel and back up the facts.

Secondly, you can point out that the rifles being used are of the MZ-4 family of assault rifles manufactured by the Israel firm Emtan Karmiel LTD. Provide link to site that provides illustrations of the assault rifle which has telltale design features.

Lastly, how do we know the video is recent? Can you provide translation and is the language, accent and/or other clues in video that point to Cameroon and these are Biya’s goons.

(2) I would avoid comparing to other atrocities such that one is more important than another. Consider that In Yemen, 8 million are at immediate risk of starving to death as a consequence of naval blockade which is a war crime.

Yemen is winning and will win this unjust war. Mark my words.

Nice post. As I have blocked him, I am just going off your post which I found interesting:

Last point from me, this regards Gaza; did you see this today ? – https://www.almasdarnews.com/article/unrwa-cuts-in-gaza-meet-protests-as-employees-reach-despair/

Yes, the images link has some of the rifles seen in the video in Starlight’s post. As for the UN aid agency announcements regarding scaling back, it is news to me and will look into it. Seems to be following the coalition playbook in Yemen using starvation as a tool of war. Gaza like Yemen is subject to a crippling blockade with the same outcome – humanitarian catastrophe.

I think things are coming to a head, or tipping point where this will cause massive blowback.

Lastly, I should have mentioned in my reply to Starlight that Southfront has an article that discusses Haaretz publishing an expose of Israel providing arms to neonazis with A focus on the infamous Azov brigade in Ukraine. The Azov unit is a de facto death squad and the article points out Azov leaders discuss openly that they are supplied arms by Israel.

Yes I read the article about about Azov + death squads, but apologies, I didn’t pair the two together.

Apparently Starlight’s account is deleted so another one bites the dust. While I am generally against banning accounts, Starlights tendency to spam comment threads with repetitive long posts was annoying.

The guy was a cretin, so good riddance to bad rubbish.

Heartbreaking stuff but TIA “This Is Africa” what you just saw is a daily event there.
The People of Yemen are not doomed, far from it if anyones doomed its the Saudi coalition.
The entire African continent is another matter, doomed some say would be an understatement when using Western means of assessment, by African means its just another day.

They’re not serious with this ? hahahahaha.

Why? Because it is fine and dandy for Wahhabistan and FUKUS to exterminate the Yemeni people, but if anyone helps the attacked people that is awful?

You make all the wrong assupmtions, Richard. As soon as I see a reason to think that any side in this pointless fight is any different than any of the other pirates that have come and gone in that cesspool, I might actually care about the outcome. At least now they’re trying to kill each other and not us.

Bull shit Smaug !
So you support genocide of women and children in N Yemen :((((

I believe the Houthis are killing quite a number from Western countries given the Coalition is heavily dependent on mercenaries – not to mention being another financial black hole for the adventuresome US and ‘friends’.

I read an interview with a women assisting as a volunteer the Houthis in North Yemen and she stated that Iran has not been providing arms or any other aid that she knows of and this is based on her own direct experiences as well as discussions with Houthi insurgents and locals.

Even if the Iranians were willing to send aid, the Coalition blockade would prevent this just as it is preventing humanitarian aid. Human rights organizations are commenting that Yemen is a prime example of a worrying trend of using starvation as an instrument of war.

Still, the war is lost and the Coalition is now being pressured to extricate itself out of the mess as Western media increasingly point out Saudi and UAE human rights abuses. The latest is UAE prisons of torture and rape. Makes for nice headlines and this is getting widely reported in the MSM. The elites want the coalition fiasco resolved with an end to major hostilities.

But the Houthis may have other plans in mind. 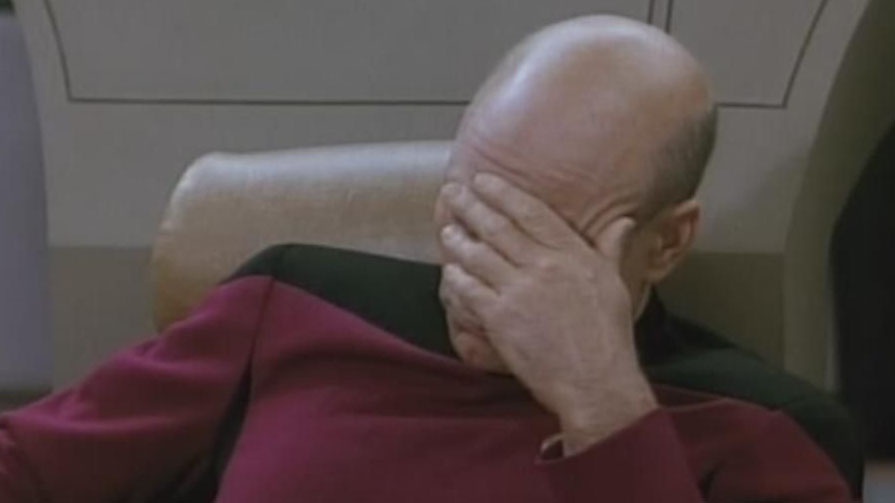 Excellent. That would be the Saudi Crown Prince’s reaction to his realization that the Coalition Operation ‘Golden Victory’ has absolutely zero chance of victory.

I can’t recall many instances of Syrians or Yemenis attacking Americans, unless they were Qaida members like the Cole bombers. Saudis and their Orc spawn like Qaida and Daesh though have carried out many attacks. Like in WW2. Adolf and Stalin were both mass murdering demons, but one was an “ally”. So the macro attacks like 9-11 and WTC 1993 bombing are all Wahhabi inspired. The micro attacks like Ft Hood, Orlando Pulse, San Bernardino and all the “workplace violence” attacks have universally been Wahhabi inspired. So why should I hate both sides equally when one is trying to kill me and my family and one is not?

Now you can go ahead and cite Beirut Marine Barracks, but that is about all you can cite, and it surely would not have happened if we weren’t doing some dumb /$$ “peacekeeping” bee ess in a war zone. Not to mention unarmed guards with wooden gates as a barricade. Might as well have painted a bullseye and unrolled a Red Carpet for the SVBIED driver.

Since the Saudi Orcs enjoy “Finding” missile launchers so much the Houthis need to start filling the desert with cardboard missile launchers for the Wahhabistani Orcs to expend millions of dollars of ordnance blowing up! :D