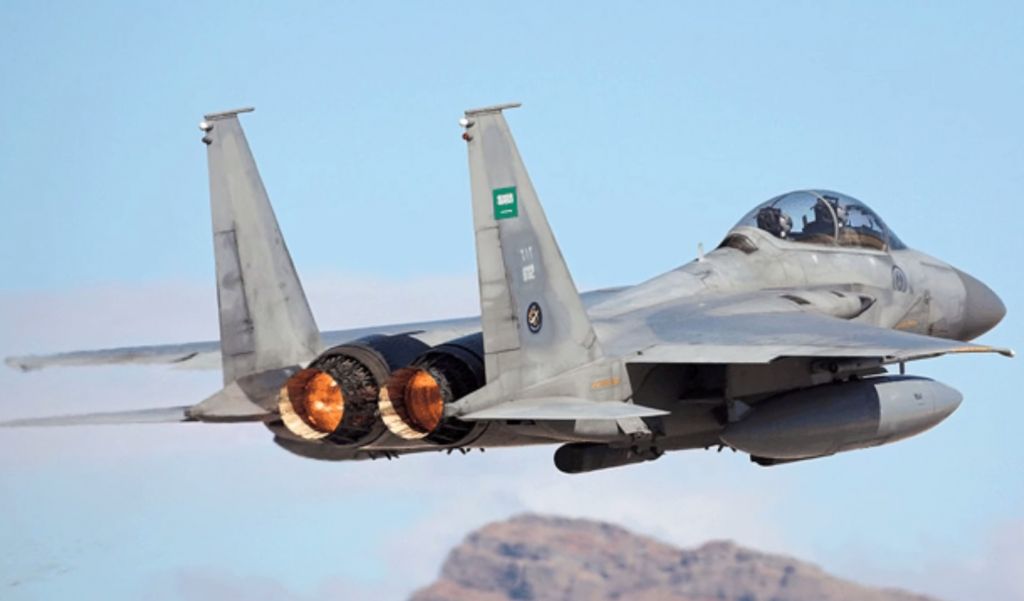 The Saudi-led coalition, currently carrying out an intervention in Yemen announced the beginning of a new operation, aimed at destroying Houthi targets.

This followed a ballistic missile attack on Saudi capital Riyadh, blamed on the Houthis.

“At 23:23 on March 28th 2020, the Royal Saudi Air Defense intercepted and destroyed two ballistic missiles launched by the terrorist Iran-backed Houthi militia from (Sa’dah) and (Sana’a) toward civilians and civilian objects in the Kingdom

The two ballistic missiles were launched toward (Riyadh) and (Jazan). No casualties, up until the issuance of this release, were recorded. The interception of the missiles resulted in debris scattering on some residential areas in Riyadh and Jazan.

The launch of ballistic missiles by the terrorist Houthi militia and the IRGC at this time reflects the real threat of this terrorist militia and the Iranian regime sponsoring it. This villainous attack does not target the Kingdom of Saudi Arabia, its nationals and expatriates only, but targets international unity and solidarity, especially under such difficult and bitter conditions in which the world unites in combatting the outbreak of the COVID-19 epidemic. This escalation by the Houthi militia does not reflect its announcement of acceptance of the ceasefire and de-escalation, nor any seriousness in engaging in confidence-building measures and reaching a comprehensive political solution with the Yemeni government to end the coup. It is a continuation of Iran’s strategy of falsification and procrastination to deepen the suffering of brotherly people of Yemen, and further proof that the Houthi militia is stripped of its will and decision-making ability to end this crisis.

The Joint Forces Command of the Coalition will continue to apply and implement all decisive and deterrent measures to neutralize and destroy such ballistic capabilities to protect civilians as well as regional and international security.” 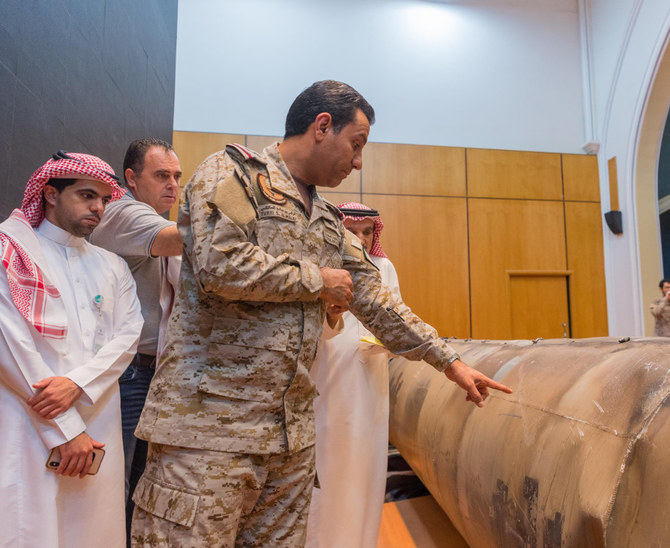 Debris from the ballistic missiles being shown to reporters. Click to see full-size image

Two civilians were slightly injured due to the falling of the intercepted missile’s debris as it exploded in mid-air over residential districts. The incident was tackled according to the procedures and plans prepared for that, Lt. Col. Mohammed Al-Hammadi, spokesperson for the Civil Defense in Riyadh region said.

In response, the Saudi-led coalition began carrying out airstrikes on the Yemeni capital of Sana’a which is under Houthi control.

#BREAKING| The #Saudi-led coalition in #Yemen carries out air strikes on the capital Sanaa, shortly after Saudi Arabia intercepted two ballistic missiles by the #Houthis towards Riyadh and Jazan.#BaghdadPost pic.twitter.com/r2desPieoL

The US Ambassador to the Kingdom condemned the alleged attack by the Houthis, saying that the world should focus on fighting COVID-19.

“As the world focuses on combating the COVID-19 pandemic and saving lives, the Houthis focused on doing the work of the Islamic Revolutionary Guard Corps-Quds Force by attacking innocent civilians,” said John Abizaid said.

“We wish those injured in the attacks a speedy and full recovery.”

On March 29th, a Houthi military spokesman said Ansar Allah forces had launched rockets and drones at “sensitive” sites in Riyadh and at economic and military sites in Jazan, Najran and Asir, near the Yemen border.

Yahya Saria said Zulfiqar missiles and Samad 3 drones were fired at Riyadh, and other drones and missiles were launched at the southern areas. Saria warned of further “painful operations” against Saudi Arabia if aggression against Yemen continued.

Just destroy or cripple the KSA’s oil industry and it will have a snowball effect. Enough said.

Yes destroy Saudis oil fields and refineries, do not let their planes carry out any of their missions, use your air defenses force them to withdraw, target their airbases and keep targeting riyadh DEFEND YOUR COUNTRY!!!!

Have the Saudis stopped bombing, accepted any ceasefire offers, or allowed humanitarian aid to enter N. Yemen during the Coronavirus crisis that ‘we should all be fighting’? They are so despicable, as is Pompeo. BTW I’m certain the Houthis and their allies are good at camouflage by now.

and the yankeetwat pompeo hasn’t let up on the sanctions in place against Iran, so my guess is that fatso has a firm grip on those sanctions and allowing people to die from the covid 19 is irrelevant if they just as well can be die from starvation or typhoid or dengue fever or be killed by a bomb from the dysfunctional states of A!

The SARS & STRIPES will be backing whichever side it can make a profit from.

Two civilians were injured? it’s unlike the saudis to bother listing the injury to their slaves. Maybe it’s chattel damage on the insurance forms.

The next Houthis missile they really need to develop is a portable surface to air missile. That would set the cat amongst the pigeons.

Anyone need a good laugh about Saudi Arabia? Look at their taste in wrestling. And yet they think that they’re going to win the war in Yemen? C’mon man. ?‍♂️

“…The incident was tackled according to the procedures and plans prepared for that, Lt. Col. Mohammed Al-Hammadi, spokesperson for the Civil Defense in Riyadh region said…”

Lt. Col. Al-Hammadi (pictured below at HQ) would not comment further on Civil Defense matters in the region, as he had to ‘take a little nap’ to ‘further refine Saudi Civil Defense strategy’ as they never expected Houthis to be able to defend themselves this long. Before lapsing into unconsciousness, Al-Hammadi emphasized, “The former Kingdom of Saudi Arabia is so utterly f’ked. Only Black Jack can save us, now!” https://uploads.disquscdn.com/images/c0207f569e6323ca0ab83371f4e4b753e8e21fa192007dba59c5060428b0a39b.png

Al-Maliki is sounding like Erdo. Delusional. Hopefully, some of his aircraft will be missing after their foray. As for the damage inflicted by the Houthis…as per usual, we’ll have to wait and see what the Houthis claim. Loved Al-Malikis ‘terrorist Iran backed Houthis’…’attack against international unity’ …coming from the bed partners of the US/Israel/NATO, that’s pretty rich. Starvation and life threatening sanctions are acceptable though. What a POS.

who is AL Maliki Iraq president ?

Saudi coalition spox Turki Al-maliki…It is in the article.

It appears the House of Sau’d Devils are facing the most critical moment of their rule. Their fight against the Houthis is part of a wider desperate effort to keep the Middle East from slipping out of America’s grip. US/Israel are facing the toughest challenge to their control of the region. The region is finally seeing a rebirth that will purge America and its vassals from there. My only concern is the number of lives that will perish before this is achieved.

That photo looks like a good use of oil barrels. It looks like the guy it the back is all serious pointing out where something bumped it, the army guy agrees, and the guy in the robe is pissed he has too go through all this shit.

Actually it looks very much like the New York City skyline around the timeline of 2001.

The only they achieved through this operation is killing a bunch of horses. The scenes of a horse crying on its child is heartbreaking

FFS, just admit you can’t win already you brain-dead Saudi imbeciles. Even America has had to swallow it’s pride in Afghanistan. They’re just dragging this out so they don’t have to admit defeat (yet). But inevitably that day WILL come, so why prolong it?

saudi brain is not that evolved yet, we have to have patience lmao

dam. saudis are some of the most fugliest motherfuckers alive