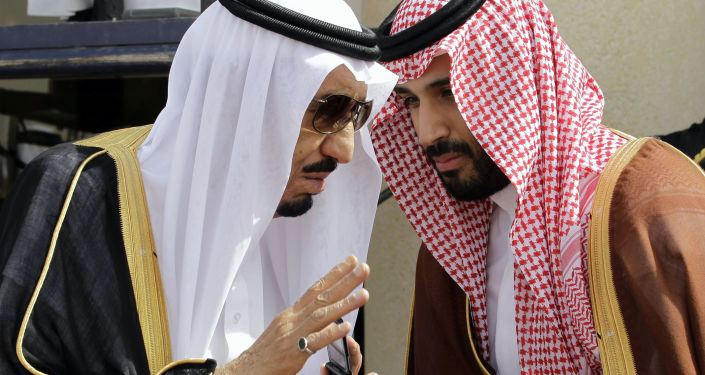 A source close to the Saudi royal family told the British Daily Mail newspaper that Saudi Arabia’s King Salman bin Abdulaziz Al Saud is planning to step down and to hand over the Saudi Crown to his son Prince Mohammad bin Salman, the Crown Prince of Saudi Arabia.

However, according to the source, King Salman will keep the title of “Custodian of the Two Holy Mosques” that’s traditionally linked with the “King” title in Saudi Arabia.

“Unless something dramatic happens, King Salman will announce the appointment of MBS as King of Saudi Arabia next week… Salman will play the role of the queen of England. He will only keep the title Custodian of the Holy Shrines,” the source told the Daily Mail.

Regarding Prince Mohammad bin Salman polices as a “future king”, the source told the Daily Mail that he will focus on Iran and Hezbollah.

“Mohammad bin Salman is convinced that he has to hit Iran and Hezbollah… Contrary to the advice of the royal family elders, that’s Mohammad bin Salman’s next target. Hence why the ruler of Kuwait privately calls him ‘The raging Bull'”, the source said.

The source also revealed that the Saudi Crown prince is willing to fight Hezbollah in Lebanon and that he is even ready to support Israel against Hezbollah. Prince Mohammad bin Salman’s “plan B” is to fight Hezbollah directly in Syria if he cannot start a war in Lebanon. according to the source.

This is not the first time the media reports about the Saudi King stepping down. On November 8, a report of the UK-based Rai al-Youm newspaper claimed that King Salman was going to step down within “two days”.

There is no doubt, that the Saudi Crown Prince Mohammad bin Salman is very ambitious and aggressive, two features he reflected in his recent “anti-corruption” purge, when he arrested dozens of Saudi Princes and businessmen. However, it is not clear if the 32 year old Crown Prince  is really ready to throw the Saudi Army into a military confrontation with Hezbollah in Syria, hundreds of kilometers away from the Saudi borders.

What does the Iraqi PMU say at all of this… They fight with Hezbollah together from day 1 Against US/IS. Will Iraq, Iran, Syria all attack KSA

We can only hope.

The PMU should make it very clear to the U$ fags and their ISIS/Saudi/Israeli allies that they will not close their hands if ISIS/Saudis/Israelies/U$A fags attack Hezbollah or Iran.

Saudi will throw thousands of misiles & bombs on hezbollah position for several months then fsa & hts will send storm troops to capture hama, homs & damascus..Assad will run to russia or iran

First let’s see what happens in Arab League meeting on Sunday. So far Saudis threatened Lebanon that they will kick out Lebanon out of the League if they don’t comply, and Lebanese PM seems furious and counts Hezbollah an inseparable part of Lebanon. Iraq too is against Saudis. One can be sure that UAE, Bahrain and that ousted dude from Yemen back Saudis with everything they got. Sudan, Eritrea and a few others will follow them no doubt. The positions of Egypt, Algeria and Jordan will be interesting, the latter is specially very mad by leaking Saudi-Israeli “deal” regarding Palestine(if you can call that a deal).

If they want to stand against “the Raging Bull”, that’s their chance. Let’s see what unfolds.

This will never happen – the Saudis are still butt-hurt over the Ansarullah missile attack on one of their oil facilities; Although that one, purportedly, did little damage, Iran have missiles that would devastate their infrastructure – the Saudis and Jews are united in their paranoia, born of the realisation that they can no longer bully their neighbours.

The Saudis cant even defeat impoverished Yemen on their own border. What chance do they really have against battle hardened Hezbollah. MBS will likely settle for a few air strikes at best.Hezbollah are used to this from Israel so are ready.

He also believes he has to “hit Iran” according to the article – it’s preposterous.

it must be hit and ran

so Iran united Sunni Arab states with Israel? Sounds like Iran is about to get skull stomped.

Good luck with that. Iran is has a powerful military and lots of friends in the region.

Bro, Iran’s Airforce is from 1970 they don’t stand a chance. Israel has one of the best militarizes on the planet.

Anything to raise the price of oil…

War and dead people are good for that…

The Yids and SA,are just players for the US,they tried in Syria with the most expensive band of Mercs ever put together,ISIL,there getting there arse proper whooped in Syria,and there own forces aint got a prayer against the hardened forces now of Hezbollah, the IRGC and Militias

Strange the Yanks have no comment to make on this alarming development – you can be sure that they’re balls-deep in formulating this “strategy” having been embarrassed in Syria. Not necessarily Trump, but those over whom he has no control.

So its a replacement involving themselves more against Hesbollah suppoorting the other side more.

I do not see Israel as alliead of them, but of course they are happy for any making Hesbollah busy.

Saudi Arabia is too weak to defeat Hezbollah even with the help of israel.

Devastation which could happen to Lebanon can’t be neglected. We all know that Israel do not care for civilians nor for infrastructure. In Yemen we see that Saudis are pretty much the same as Israel in regards of respecting law and civilian life.

Hopefully they ( Saudi Israel ) will be stopped before new conflicts arise, important to note is Egypt statement that they do not want another war.

Maybe he thinks he can do what Israel does and bomb Hezbollah in Syria with no fear of counter-strikes. At some point, someone will turn the air defenses on.

The irony of Trump’s decertification is that if he is successful in breaking the JCPOA, that would free the weapons import moratorium that Iran agreed to for 3 more yrs. Iran would be free to buy more Russian air defenses or even Su-30’s ahead of schedule. Wouldn’t that be a kick in the head, Cotton, Trump, Haley’s heads would explode, ‘how dare Iran have the means to defend themselves and other sovereign states under attack!’

Halley would have to be one of the dumbest hick chicks i have ever seen. I am firmly convinced that was why she was chosen to represent uISIa in UN.

>>Haley IS one of the dumbest hick chicks I’ve ever seen. <<

Google is paying 97$ per hour,with weekly payouts.You can also avail this. On tuesday I got a brand new Land Rover Range Rover from having earned $11752 this last four weeks..with-out any doubt it’s the most-comfortable job I have ever done .. It Sounds unbelievable but you wont forgive yourself if you don’t check it !ft103d: ➽➽ ➽➽;➽➽ http://GoogleOnlineVIPEasyTechJobsOpportunities/easy/jobs… ★✫★★✫★✫★★✫★✫★★✫★✫★★✫★✫★★✫★✫★★✫★✫★★✫★✫★★✫★✫★★✫★✫★★✫★✫:::::!ft103lhhh

i didn’t particularly follow the diatribes in the saudi royal family, yet i remember reading that the US is worried by the strenghtening of this particular figure bin salman and that he consitutes a risk to US interests. in any case, in the current situation, he can only worsen the saudi positions if he implements an aggressive policy towards hezbollah, lebanon and iran

Saudi family consists of different factions, just like the US government. The former crown prince was a long time CIA asset and American military and intelligence backed him. The current crown prince is backed by Trump and his son-in-law and is NOT a suitable asset for the Americans because of his unstable and unpredictable nature. That’s why he is eliminating the competition, so there’s no more suitable candidates for Americans except for him.

And I agree with you. He WILL only weaken Saudis by all his chaotic and knee-jerk policies and decision. That’s why I support him %110!

I fully agree with all you said.

I urge all to get a grip on reality. KSA has 250,000 soldiers trained and ready. They have about 30,000 pinned down on southern border with Yemen. This means they could field about 100,000 soldiers for a war in Lebanon. This matches the stretch of Hezbollah. I have no doubt the IRGC would join the fight with another 20,000 or 30,000. I have no doubt eventually the PMU and SAA would join the fight. Israel has 170,000 and everyone of them are pinned down, Gaza, West Bank, Lebanon and Syrian border. on top of that KSA lacks the lift capacity to move large quantities of troops and equipment. Is Turkey going to just sit there on the sidelines? Is Syria going to join in? Will the West Bank start a third intifada to distract? Would Hamas enjoy the opportunity to attack?

What is my point? MBS obviously has the commitment of the USA. Trump’s word or promise is worth nothing. It would need a war resolution and beyond that the USA military is broken. MBS has been suckered.

You write as a russian videogame.

Lets have an intelligent conversation if possible and not your insults. What did I say was wrong? What is your counter argument. Just so you know since I read your other comments, the USA is pushing this war. You are wrong about that. Kushner visited MBS and gave him the green light.

The Saudis are being set up by US and Zionists as no one needs their oil anymore and the dotard “prince” is a perfect patsy.

There has to be panic news cycle……especially while Netanyahu is under investigation. GCC is being forced to recognize US sanctions on Hezbollah. …probably IRGC and PMU to follow. The power/money grab forces the Kingdoms flunkies to pay up and buy their freedom, Line up or else. US has to be running this….the Red Prince is to limited of mind to scheme something so sweeping.

It has already backfired. ..as Lebanon has signaled F/U….give back Hariri, and don’t let the Door hit you on the way out.

As usual the same parrot excuse is there. How pathetic. If so, why dont You ask to be colonies or make an Ottman.

You only fake Yourself again and again.

This saudi changes are classic simple. The Emirat Dictatorship again will have only one at the top. By that its about the opposite to Your “set up by US and zionists”.

By that Your non devellopzone will be kept intact.

If Russia wishes to be a friend of humanity. They had better equip the Lebanese civilian militia tasked with the security of Lebanon with 1,000 pieces of Thermal imaging scopes and anti-missile defense short range rockets.

Still more grand standing from the king to be and his strange bed fellows. They are not stupid enough to advertise where they’re going to telegram their punches. I feel Lebanon is going to look like the ‘Phoney War’ of 39-40 while the real strike is going to be somewhere else. Afghanistan seems plausible a location for round 2.

this is the race between Israel and Saudi who will reach hell first and who is the biggest devil.

if I may say this also. If this war escalates into a Saudi vs Iran war, Oil prices will go through the roof! Who will that benefit? Everyone else with oil lol! Russia would benefit, Venezuela (they’d be happy), Norway, Azerbaijan, Kazakhstan, England etc etc!

Interesting times ahead! I myself back Iran, Russia, Iraq and Syria in this war! Including Hezbollah!

We are starting to enter biblical times!

Whatever these clowns decide to do, no doubt about it we will all follow it every step of the way, planning and strategizing to outsmart them and win :)))