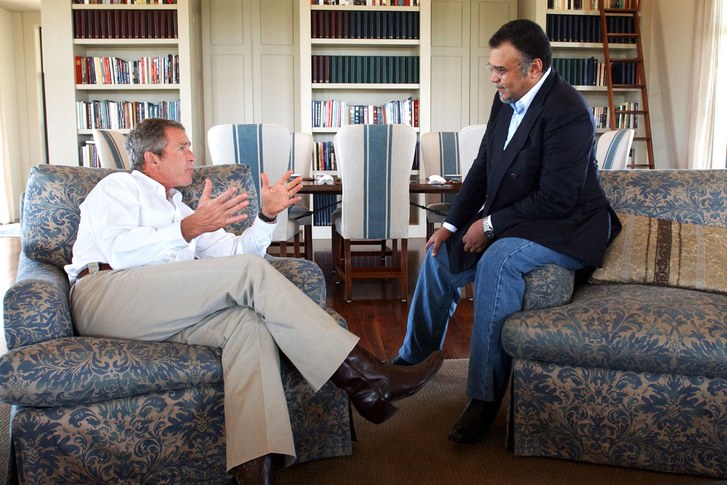 The Saudi Authorities arrested Prince Bandar bin Sultan as a part of the anti-corruption” purge that was launched by Saudi Arabia King Salman bin Abdulaziz Al Saud and his Crown Prince Mohammad bin Salman, according to a report of the Middle East Eye (MEE) online news portal.

Prince Bandar is a former Saudi ambassador to the US, and he is known to be a friend of former US President George W Bush, and former Syrian president Hafez Assad. Prince Bandar become really famous in 2011 when he was tasked with leading the Saudi efforts to fight Syria president Bashar al-Assad.

Prince Bandar quickly become known as “the engineer of the Syria war” after he organized everything about the war, from the political opposition to armed groups in Syria. According to many reports the Prince was behind shipping tons of weapons and thousands of Jihadists from all over the world to feed the war against the Syrian government.

The engineer of the Syrian war went to great length while trying to remove Bashar al-Assad, he was accused of founding the al-Nusra Front (al-Qaeda branch in Syria) and even ISIS later. The prince even offered Russia a bribe to stop supporting Assad back in 2013.

Prince Bandar is the brother of Salman bin Sultan Al Saud who ordered the Free Syrian Army to attack the Syrian capital Damascus back in 2013 according to leaked NSA document.

Because of his crooked ways that have no limits and after ISIS raise in 2014, Prince Bandar was removed from his position as the main planner of the battle against Assad. Bandar was replaced by Prince Muhammad bin Nayef and Prince Mohammad bin Salman himself.

The two reportedly suspended many of the operations, which were planned by Bandar, and engaged in a direct dialogue with Russia in what appears to be an effort to hide Saudi Arabia’s role in supporting terrorist groups in Syria.

If Saudi officials confirm the arrest of Prince Bandar, it could be a sign that the new Saudi leadership led by the Crown Prince Mohammad bin Salman is willing to make radical changes in the Saudi Arabia polices regarding Syria. Or, it’s just another sign of the sky-high tensions within the Saudi leadership.

He probably is complicit,maybe he is the fall Guy.Good to see some serious action taken all the same.Hopefully he will spill the beans.

Definitely complicit and one could see this happening because of the saudi russian rapproachement recently.i think it is fitting to see this prince “bandar bush” executed for high crimes and treason. He was afterall the ultimate instigator of the rape and head chopping of children.

Now i just have to pray that his zioyanqui accomplices come undone.

Go russia for slapping the zioyanqui warmongers in the face with a prize this valuable!

Hadnt thought of it from the angle,I agree with you.

Almost any Saudi royal or official caused suffering of others, from sexual harassment in European hotels and rape of their own servants to murder of the defenceless by hundreds and thousands.

If any other country on earth (except for the chosen one) did what Saudis do, we would read or hear nothing else from the MSM.

So cleaning the house (of Al Saud and others) should be beneficial to the KSA.

How this all pans out will be crucial to whether the Middle East decends into an even worse widepread and vicious war or drifts towards a sensible peace which is what all sane people would wish for. It now all depends upon whether MBS is under the control of the Zionists or is listening to Russia, China and Syria

>>If Saudi officials confirm the arrest of Prince Bandar, it could be a sign that the new Saudi leadership led by the Crown Prince Mohammad bin Salman is willing to make radical changes in the Saudi Arabia polices regarding Syria. Or, it’s just another sign of the sky-high tensions within the Saudi leadership.<<

Probably the latter. I doubt that sanity has returned to Saudi foreign policy. If anything it gets more crazy with the hour.

It is in line with removing anyone who “potentially” “could” make trouble for MbS.

On top of that, it could also be that the man is actually guilty of blatant corruption.

In a state that is long term hereditary absolute dictatorship – in which the extended ruling family are the oligarchs that run the bureaucracy and economy – it is fairly safe to assume that if look closely enough at any of them – are likely to find activities of corruption.

So a good clean up will let them get rid of almost all of the old guard, free up a lot of money that was embezzled and will be a warning to the next bunch.

As a Saudi prince corruption basically comes part with the territory. It’s like saying water is wet. ;)

No question he is guilty of war crimes, terrorism and perhaps even corruption. He’s an excellent scapegoat, as his guilt is beyond question. I hope MbS is able to execute him before his is inevitably depose.

This crisis is getting worse and worse and remember the Great Purge.

To me it looks better and better.

Important to note is that ” anti corruption measures ” done by SA are simply the way to fill budget with money and remove opposition. Everything else which comes out of it is icing on the cake for Salman.

$35 billion in seized wealth so far!

Little more and they will cover budget for 2018 :)

The situation in Saudi seems too hysterical to be just a power struggle. I’m now wondering if Someone has passed on a message to the saudi royal family. A message that says something like “you’re next!” There must be a huge anger in Iraq and Syria towards the Gulf monarchs and maybe there is a plan to wipe the slate clean. If someone had come and smashed my country to smithereens I might have such a plan. Alternatively the Western deep states might have made it clear that “you lost in Syria, that was not part of the plan, you’re on your own now”. Maybe the two together would put a few bees under the saudi royal bonnet.

I’m betting that the new Saudis are no less ‘assoholic’ than the old Saudis and that we’re seeing is a ‘message’ to any opposition.

Prince Bandar was also one of the architects of the Iraq war back in 2003. That war, to take out Saddam and make the Middle East safe for Israel, could never have happened had the Saudis not signed on to the Bush-Cheney-Israeli plan in 2002. Furthermore, in order to get the Saudis to agree to the Iraq war, they were promised regime change in Syria and Iran to compensate for the fact that the Shia would likely take over Iraq. Prince Bandar was a common fixture in the back rooms of Washington during the build up to the war in 2002. Here is a short video of General Wesley Clark explaining exactly what the Saudis were promised back in 2002.

The article attempts to paint Prince Salman as some kind of reformer pushing for change in the Saudi war policy. To the contrary, all indications lead me to believe that Prince Salman is going to “double down” on what Prince Bandar started.

My guess is that maybe a coup attempt was building in Saudi, akin to the CIA/Fethulla Gulen attempted coup, Turkey, 2016. Forewarned by Putin, Erdogan pivoted toward Russia, away from the ever-treacherous dumb Yankers & their eternally treacherous plotters & trainers, Perfidious Albion.

We will only know what this Saudi carnage means when we see if Salman pivots towards Russia or remains a tithe-paying vassal of a collapsing Western UK/US/ZIO/Rothschild Empire.