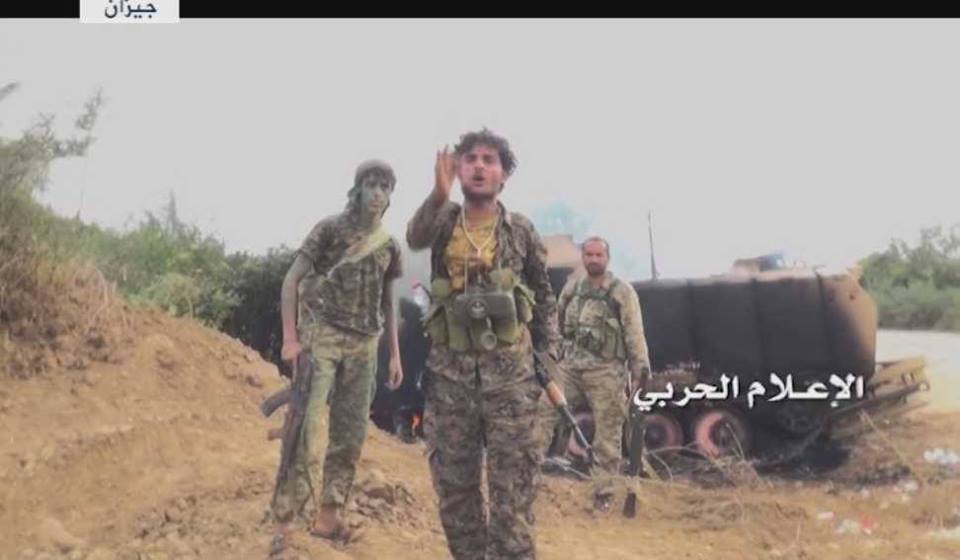 AlMasdarNews reports: The Houthi forces continued to roll through the Saudi countryside on Sunday, capturing several sites from teh Saudi Army in the Jizan Region.

According to the official media wing of the Houthi Forces, their units captured 4 villages in the Jizan Region on Sunday, including Sharq Al-Bahtit , Qilal Al-Qarn, Al-Kars, and another small village next to the latter.

Following the capture of these villages, the Houthi forces established full control over the Saudi Army’s supply line in the Jizan Region; this roadway connects Qa’em Zabeed and the nearby village of Al-‘Abadiyah.

The Saudi Army reportedly lost during this large operation, at least 6 Bradley armored vehicles, 2 Abrams tanks and 2 other technical vehicles.

In addition to this loss of equipment, the Saudi Army already suffered more than 50 casualties during this massive Houthi attack on Sunday.

The Saudis are in trouble. War turning into a disaster and the economy going down the tubes fast.

could not be happenning to a nicer regime, think i will buy a curry and a case of beer to celebrate….

The Saudis (like their US masters) are only comfortable dropping bombs from high above not taking any risks. They forgot that in a war it is necessary the fight on the ground too. Since they are running out of money cannot pay more mercenaries to do that.

You are so right, Saudis are cowards

lol, at this pace the houthis are going to march into Ryad, giving a solid contribution in erasing wahabism and handing it to the latrines of history, along with zionism.

The houtis will wipe the Saudis out because Iran hates Saudi Arabia. And Donald trump is sick of that traitorous Saudi nation