A video, showing a process of destruction of two armored fighting vehicles of the Saudi Arabian Army, was published online by Yemeni rebels. Saudi military once again confirmed their professional incompetence. 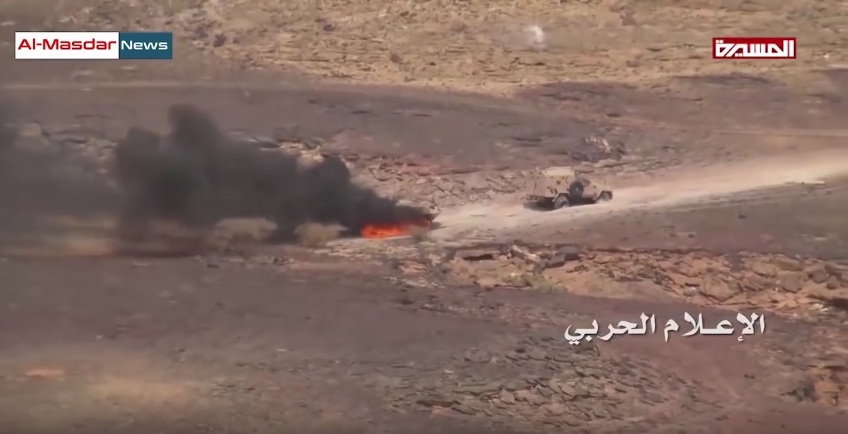 Yemeni rebels published online a video, showing a process of destruction of two armored fighting vehicles of the Saudi Arabian Army. The incident occurred on August 24, during a rebel attack on a military outpost in the area of Najran in Saudi Arabia.

During the hasty retreat of the Saudi forces, a front axle of the Didgori 2 armored multi-role and special operations vehicle, developed by the Georgian Scientific-Technical Center ‘Delta’, has collapsed at the full speed. The armored car stopped in the middle of the road, the LAV armored fighting vehicle crashed into it from behind.

Commentators noted that the Saudi military had an opportunity to organize the defense and rescue their comrades. But due to lack of organization and haste they were dispersed by poorly armed rebels.

Houthis pretty well beat Saudis both on their own territory and on the territory of the aggressor. However, this is not surprising. As soon as something happens, Saudis leave their modern military hardware, run away and suffer various optional losses. For example, we can remind a successful hit of a ballistic missile at the Saudi base, where dozens soldiers were killed. The Saudi Arabian Army also regularly suffers significant losses both in manpower and in military equipment during fighting in the central and northern regions of Yemen. This is one of the reasons why the Saudi-led coalition can not defeat the combined forces of Houthis and military, rallied around former president Ali Abdullah Saleh.

Since Saudi Arabia is not so successful in the war, Saudis massively bombs Yemeni towns and villages, controlled by Houthis. As various experts note, the Western media has very poor reaction to this, preferring not to react to killed children, whom it is in no hurry to make “symbols of the Yemeni war.”

We can regularly hear hypocritical statements that clashes in Aleppo must be stopped, but it is hardly possible to find calls for an end of the bombing of Sana’a by the Saudi Air Force.

The bloke sprinting looked like he could Usain Bolt a run for his money. Its a pity the Houthis don’t have more heavy weapons as the Saudis are useless.

If those saudi monkeys didn’t have oil they would be living in huts. They are totally useless in every respect. They are so stupid they don’t even realise it.

never, never go full speed on offroad. It is not a tank