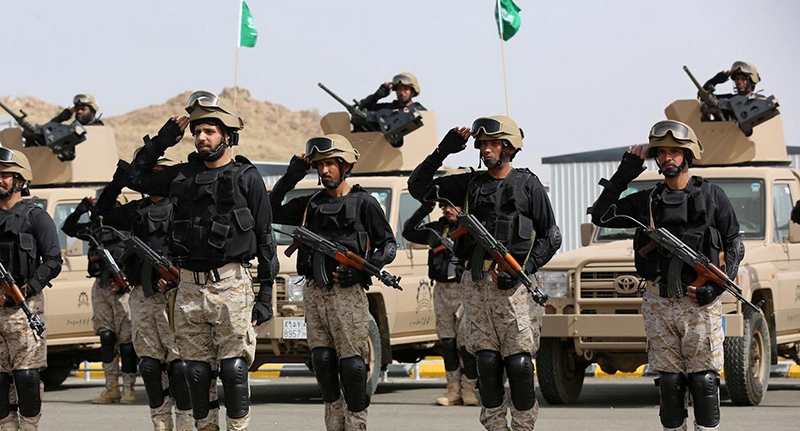 The media are actively commenting on Riyadh’s announcement it has formed an “Islamic counter-terrorist coalition” under its own aegis, with the participation of 34 countries. This coalition will address requests by member states for assistance in fighting terrorism. The relevant announcement was made by Saudi Arabia’s Foreign Minister Adel al-Jubeir. “Every case will be considered on its own merits. Support will consist of exchange of information and troop training, as well as military intervention should it be needed. Nothing is ruled out,” said al-Jubeir. This coalition, according to the minister, “is neither Sunni nor Shia, it’s a counter-terrorist coalition.” In addition to Saudi Arabia, it includes Pakistan, Jordan, UAE, Pakistan, Bangladesh, Bahrain, Benin, Turkey, Tunisia, Senegal, Sierra-Leone, Sudan, Somalia, Palestine, Qatar, Kuwait, Lebanon, Libya, Mali, Malaysia, Niger, Nigeria, Yemen, Chad, Togo, Gabon, Guinea, Djibouti, Morocco, Cote d’Ivoire, Mauretania, Maldives, and Comoro Islands. Additional 10 countries including Indonesia support the organization. Without any doubt, all of these countries are well endowed with military and intelligence capabilities.

However, the core of the matter is not the coalition’s formation, an act which has almost no practical meaning. For starters, al-Jubeir’s statement that the coalition is neither Sunni nor Shia is, to put it mildly, out of touch with reality. Not a single Shia state is included, and the coalition will not be used against terrorism but rather against its Shia manifestations. We are likewise full of doubt concerning the claim it will fight the Islamic State since at least two of its members, Qatar and Turkey, are its active sponsors. Even though the Saudis themselves in different circumstances would have used all means at their disposal to destroy it.

So let’s talk about something other than the coalition whose future, irrespective of the bold pronouncements in the media, is extremely uncertain. Nobody knows how decisions would be made, or what the list of potential threats is, not to mention the mechanism for sending troops or resources to some part of the world. It’s equally unclear who will pay for it given the low hydrocarbon prices. Maybe Riyadh doesn’t know this, but being a patron of a coalition is an expensive undertaking. If one considers the vast majority of member-states, it’s obvious they won’t finance it. Therefore we are looking at Riyadh’s attempt to simply proclaim the existence of some narrowly Islamic “anti-terrorist project” which has a clearly anti-Iranian bent and an unclear future.

But nobody has made the Islamic factor in the Saudi struggle for power irrelevant, which is why Riyadh’s plans are of interest to us when it comes to its support of radical groups in Syria. Officially, the meeting of Syria’s opposition forces on December 9-10 in Riyadh proved a failure for Saudi diplomacy. At least that’s how Western analysts regard the efforts by the Minister of Defense and Crown Prince Mukhammed ben-Salman to convince al-Nusra leaders to join the anti-Assad and anti-IS coalition. This effort was supposedly preceded by lengthy negotiations between the Saudi General Intelligence Directorate (GID) and al-Nusra leader Abu Mukhammed al-Julani in the “Turkish capital” of the opposition, Gaziantep, in order to convince him to issue a communique on “full and complete break with al-Qaeda. Al-Julani was not swayed, and the communique was a key condition for al-Nusra joining the opposition forces coalition.

This interpretation of events needs additional commentary. Al-Nusra is GID’s baby and is being used solely to preserve Saudi influence in the region. The refusal to break with al-Qaeda was not driven by al-Julani’s ideological convictions or by al-Qaeda’s money. Because it’s not sending him money, Riyadh does, with retired GID operatives working on his staff and coordinating their actions through GID’s resident office in Gaziantep. Therefore framing the discussions in terms of attempting to convince al-Julani sounds unconvincing. Several Western analysts drew the conclusion that al-Nusra is shifting its allegiance to Qatar and Turkey. As evidence, they cite the negotiations between Qatar intelligence emissary Ali al-Mery with al-Nusra leaders on releasing 16 Lebanese soldiers who were indeed released on December 1 after 18 months in captivity.

Nevertheless, we are certain al-Nusra is just as much a pro-Saudi organization as ever before. The dog-and-pony show with the attempts to convince its leaders is needed by Saudi Arabia for one reason only: West has to be shown that the coalition they formed is not Islamist in any way. Whether al-Nusra officially cuts ties with al-Qaeda has no practical importance. This organization is on the US DOJ “black list” which means that any coalition with its participation would lack legitimacy in the West, which means the Saudis have to demonstrate a principled stance. Hence the whole spectacle. Al-Nusra thus becomes officially alienated from the pro-Saudi coalition even as it remains its member. Given that its composition includes Jabhat al-Fath as well as two more pro-Saudi groups, Jaysh al-Islam (headed by Zahran Allyush, and the core of the group are active Saudi military and intelligence officers), and Ahrar ash-Sham. Both of those also are part of the Saudi coalition. That’s the whole “clever idea,” and it’s not clear whom it is supposed to fool.

Moreover, the new coalition does not include the Kurdish Democratic Union Party. It was excluded on the basis of GID information that the party has links to Russia’s GRU and Iranian Quds Force. On December 2, a group of top DUP commanders visited Tehran at the official request of the party’s leader Salah Muslim, and afterwards supposedly flew to Moscow together with Iranian representatives in ordr to conduct negotiations to obtain arms and munitions. We must also add that Turkey is dead-set against DUP participation in the coalition, which is the most important of reasons for its exclusion.

Another great example of how Shaitan is using the institution/organization to war on humanity, of course, always cloaked in “white” semantic silk like “anti terrorist”, etc.

That’s why the only institution/organization that the Abrahamic God propagates is the family; His line is drawn at the minimal – what is needed for procreation.

But since the Enemy of humanity is organized, they can only be fought successfully by being organized – Hezbollah learned that from their Enemy.