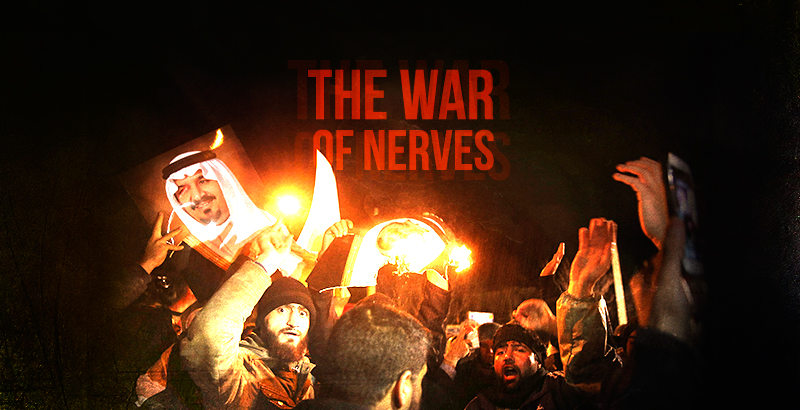 Saudi Arabia’s mass execution of “terrorists” whose victims include the senior Shia cleric Nimr al-Nimr has triggered a crisis between Saudi Arabia and Iran, whose radicals ransacked Saudi embassy in Tehran and which resulted in Saudi Arabia breaking off relations with Iran, that threatens to spill into outright warfare and has additionally polarized the Middle East. What is behind Riyadh’s and Tehran’s moves and what are the likely consequences?

One possible interpretation for the Saudi provocation is that it wants to trigger a crisis to bump up the global oil prices whose drop is badly hurting Saudi Arabia’s budget, forcing it to enact painful austerity and even threatening its ongoing military operations, proxy and otherwise, in Yemen and Syria. Nevertheless, while oil briefly spiked following reports of the Saudi and Iranian moves and counter-moves, a permanent increase in oil prices is unlikely barring an escalation to actual warfare between the two states and its allies.

Saudi Arabia and Iran do not share a land border, and are thus reduced to glowering at each other across the Persian Gulf, waging proxy wars in various parts of the Middle East, and, at worst, trading missile and air-strikes across the Gulf, with Iran possibly attempting to shut down tanker traffic through the Strait of Hormuz. Such an escalation is unlikely given the likelihood of direct US military intervention in order to keep the tanker traffic flowing, in repetition of the “tanker war” of the late 1980s. Granted, considering that the US fracking industry is being hurt by the Saudi oil dumping, the US just might countenance an escalation of this sort in order to return a big sector of its extraction industry to profitability, but so far no US statements suggest a willingness to stand aside and let the situation escalate.

Saudi Arabia breaking off relations with Iran is also likely to have the effect of greatly complicating the Syria peace process if the two major regional powers which are closely engaged in Syria are unwilling to talk to one another. Furthermore, the Saudi move appears to have been calculated to provoke an Iranian over-reaction that would have the effect of strengthening the sanctions regime against that country and increase its international isolation. Whether the Saudis are able to sideline Iran instead of sidelining themselves is another matter. In a surprising move, Turkey condemned the Saudi mass execution, which suggests Ankara is engaged in yet another opportunistic move to attempt to squeeze out a regional rival. Indeed, given its provocative nature, the mass execution was a risky political move that casts a light on the internal workings of the Saudi political decisionmaking.

While the Saudi political upper echelon is good at evading close scrutiny, the recent erratic Saudi behavior appears to be due by the divisions within the Saudi elite that have been triggered by the death of King Abdullah in January 2015 which sparked a succession power struggle that is still continuing. The weakness and possibly even the absence of a central executive leader in such situations naturally empowers the reactionaries who are attempting to provoke conflicts around Saudi Arabia’s borders in order to solidify their grip on power at the expense of the moderates. Moreover, international crises also provide a useful cover for the Saudi hardliners to crack down on domestic dissent which is only likely to grow due to the reduction in government expenditures that will be painfully felt by wide segments of the Saudi public. In that regard, the mass execution might have been a signal that the Saudi leadership is about to pursue a “policy of economic triage” in which the bulk of the economic pain will be shifted on the most vulnerable and least powerful segment of the society, which in this case are the Shia. In that respect, the execution was intended as a warning to the Saudi minorities, though as it often happens in cases like that, the warning might provoke unrest instead of deterring it.

The reason behind Saudi reactionaries engaging in increasingly provocative maneuvers both domestically and internationally is their growing sense that time is not on their side. The low oil prices have not only forced painful economic measures but have also led to a 30% reduction in Saudi defense allocation for 2016, which means that the kingdom will not be able to continue the policies it has been pursuing for much longer. If it does not succeed in imposing its will on Iran, Russia, and possibly even Turkey soon, it will not be able to do so at all. And if there is one emotion that motivates the recent Saudi actions, it is fear. Fear of losing international influence to Iran, and ultimately fear of losing power domestically. If Saudi Arabia, which enjoys a fairly privileged relationship with the US and the rest of the West, cannot bring isolated and sanctions-afflicted Iran to heel now, how will it be able to cope with the Islamic Republic once the sanctions are lifted, international assets unfrozen, and finances boosted by a stream of oil revenue? Saudi Foreign Minister al-Jubeir hint at Saudi Arabia developing its own nuclear arsenal to counter Iran’s power was not mere bluster but a reflection of Saudi Arabia’s self-perceived weakness relative to Iran. Furthermore, the oil trap also has a domestic dimension. Confronted by a ballooning budget deficit, Saudi Arabia might be forced to devalue its currency in order to plug fiscal gaps, in other words, pursue a policy adopted by Russia well over a year ago. However, the downside of devaluation would be the increased costs of imported products. Whereas a country like Russia, with a well developed industry and agriculture, can pursue an import substitution strategy, Saudi Arabia’s options are considerably more limited as it had failed to diversify its economy. The growth in the prices of imports is likely to cause dissatisfaction among those segments of society who have grown accustomed to consuming imported goods, namely the middle and upper middle classes whose support is crucial to the survival of any regime, even as despotic as Saudi Arabia’s.

Ironically, even though the broad trends favor Iran over Saudi Arabia, the Iranian hardliners are also feeling like an endangered species these days. If the Saudi mass execution was intended to provoke then it succeeded brilliantly as Tehran’s own hardliners rose to the occasion and plundered the Saudi embassy in Iran in an eerie repeat of the occupation of the US embassy there in the late 1970s. The fact they engaged in an act that was bound to provoke a reaction suggests the reaction it provoked was actually desirable from their point of view. Moreover, the attack on the embassy was not the only recent provocative act by Iran. The recent ballistic missile test which prompted the Obama Administration to expand sanctions against Iranian missile facilities and individuals involved in the missile program, and the cruise missile training launches in close proximity to a US aircraft carrier were likewise intended to provoke a negative reaction from the West. This negative reaction would accomplish a number of important political goals for the Tehran hardliners. First of all, an damages the prestige of President Rouhani who has been viewed as too soft on a number of issues, with the military/security wing of Iranian elite favoring someone more in the mold of Mahmoud Ahmadinejad. Secondly, the Iranian hardliners rightly fear that the lifting of sanctions would destabilize the Islamic Republic to a far greater extent than the sanctions ever could. Indeed, given the Obama Administration’s policies throughout the world, it is rather likely the Iran negotiations were aimed at making Iran more dependent on Western economic ties in order to then use them to blackmail Iran.

At the moment, neither side appears willing to back down. The Saudis have effectively painted themselves into a corner out of which there is no real way out, other than an Iranian collapse or a…Saudi collapse or at the very least a Saudi palace coup that ousts the Riyadh’s war faction and ushers into power leaders more willing to compromise with Iran on a variety of regional issues.  At this point it is not clear who these leaders would be, and whether they could even succeed in preventing Saudi Arabia from spiraling into a civil war in the event of a palace coup. Therefore at the moment one has to consider the distinct possibility of Saudi Arabia entering its own “Arab Spring” in 2016, with utterly unpredictable consequences for the country and the region.