Saudi Arabia is going to build the Salwa Canal that will separate Saudi Arabia and Qatar.

According to Saudi Makkah newspaper, bidding for the construction projects will end on June 25 and the winner of the tender will be announced no later than 90 days after the deadline. The construction is epxected to be completed in one year. The project is expected to cost $750 million.

If the water canal is constructed, it will ultimately make Qatar an island nation.

“Saudi authorities are reportedly considering digging a channel 60 kilometers (37.5 miles) in length and 200 meters wide that will be 15-20 meters deep on the Saudi part of the Salwa Island to create a container base for nuclear waste from its yet-to-be-built reactors.

A 1-kilometer stretch of land north of the channel, bordering Qatar, would become a “military zone,” permanently ending land trade between the two Gulf countries and tightening the blockade,” Daily Sabah says. 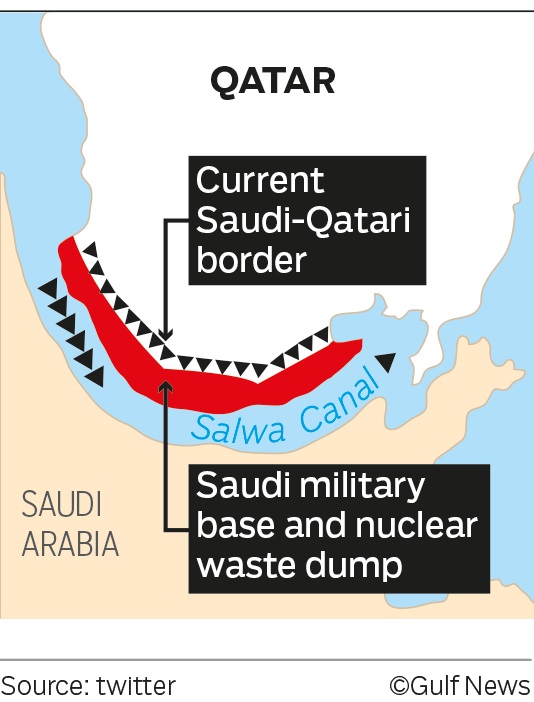 In June 2017, a deep diplomatic crisis erupted between Qatar and the Saudi-led bloc. Saudi Arabia and some of its allies accused Qatar of supporting terrorism and cooperating with Iran. Thus, they justified the implementation of anti-Qatari sanctions, imposing a blockade on the country.

Lol ! The saudis are completely nuts !

What was that old saying again? Ah, yes: Cutting off your Qatar to spite your Arab unity.

This what can happen when mafia style dynasties with too much money fall out with each other :)

I must order some more popcorn .

Saudi Arabia is broke so ofc they have loads of grandiose plans.

Screw both sides of this pointless mini cold war. The report that the Saudis will use this to store nuclear waste is pure propaganda. There is no way to know that the Saudis are using possible future reactors as anything besides a propaganda tool and besides contaminating foreign soil with nuclear waste will only get the Saudis ostrasized. What we have here is simply another petty retaliation that will probably be started slowly but never finished.

Saudis will not be ostracized as long as they have money to bribe the politicos in the EU and USA.

QATAR and IRAN should simply build a bridge connecting each to one another. They can hire that Russian construction company that built that bridge to the Crimea.

And by the way this Saudi-Zio project should be totally illegal. Someone I am sure that a Jew sitting in a Tel Aviv office dreamed this scam up. And I am sure Saudi Arabia will be paying him lots of shekels. I am also sure Israeli front companies posing as (non-Jews) will be making BIG money off of this massive construction undertaking.

So, it’s not just a canal, it will be a radioactive one… we’re so fucked…

They have no right to do this.

Do the israeli have the right to kill palestine children?

This is war crime.

But saudis pklans are in another cathegory. YOu can not make such canal or chnge the direction of rivers. this is similar like sudan would try the redirect nilus and egypt should dry out.

total war. also yanks will not agree with this. saudis have big mouth, nothing else.

Muricans are getting increasingly isolated and letting their war pigs in the middle east run rampant, the empire is losing cohesion… And does Qatar has any true ally? Isn’t Yemen war in another category also.

I repeat, we are fucked, it seems I’m lucky to live far away from eurasia, but eventually the cycle of endless wars will get here too.

As I know, Turkey is their ally. Erdogan sure goes in war with SA. Iran could also help, but it ws not be the optimal version. :)

This royal throne of kings, this sceptred isle, This earth of majesty … This blessed plot, this earth, this realm, this QATAR.

While other making bridge and road, this idiots are building wall and canal, lol

Take a wild quess what will happen if those crazy medieval people get to have nuclear power plants???

This article says…. Saudia Arabia is becoming an nuclear armed nation……or is it already???who bankrolled pakistans trillion dollar nuclear weapons program???You folks think that they did it for free??? Check it out yourselves in the net….google it….saudia arabia says it has nuclear weapons….you´ll be surprised.

Maybe good news for Qatar too? Maybe now they don’t need to fear any Saudi invasion as the Saudis basically are going to cut off any possible invasion route.

Especially if the Qatari’s counter with another canal on their side of the border !

A two way canal? Perfect for traffic. Quick! Throw more money at it!

$ 750 million is chump change for the Saudis and Qataris. A canal on the Qatar side would turn the red Saudi military base into a narrow island that would likely be washed away unless the Saudis spent big coin pile driving anchors for it.