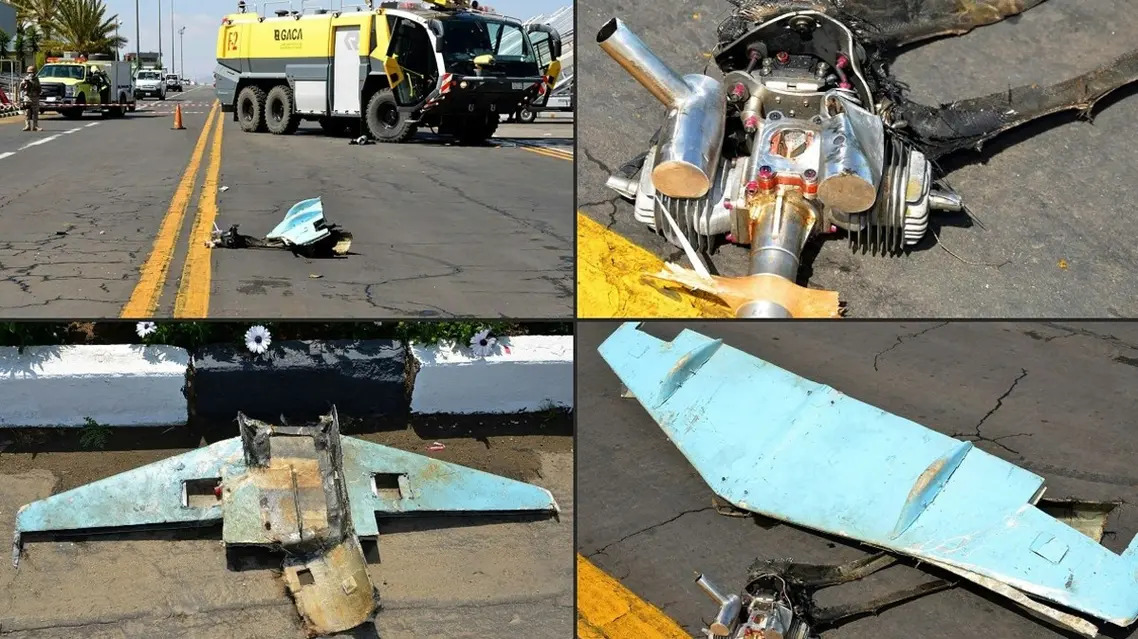 This combination of pictures provided by Saudi Arabia’s Ministry of Media on February 10 shows wreckage of a drone launched by the Houthis in Yemen toward the Abha international airport. Click to see full-size image

The drone launched by the Houthi rebels was heading toward the city of Khamis Mushait in southwest Saudi Arabia, the coalition’s spokesperson General Turki al-Maliki said.

“Joint Coalition Forces have intercepted and destroyed this morning (Friday) a bomb-laden UAV launched systematically and deliberately by the terrorist Houthi militia to target civilians and civilian objects in (Khamis Mushait),” al-Maliki said, according to the Saudi Press Agency (SPA).

“These acts of aggression to deliberately and systematically target civilians and civilian objects by the terrorist, Iran-backed Houthi militia amount to war crimes.”

The Saudi-led Coalition said it would continue to take the necessary measures to protect civilians in Saudi Arabia and elsewhere in accordance with international humanitarian law.

This is, of course, entirely empty rhetoric, since Saudi Arabian airstrikes are the main reason why civilians die in Yemen, as well as the blockade on al-Hudaydah and the frequent ceasefire violations.

Still, when the Houthis’ offensive on Marib Dam and Marib city began around February 20th, the UN and others immediately began condemning the attacks and saying that the escalation needs to immediately end.

Al Arabiya even reported that the latest Houthi offensive in Yemen’s city of Marib is a battle against the United States and its allies, the group’s top military official Abdullah al-Sharifi told the militia’s al-Masirah TV.

“The fight now is not with our brothers, but it is between us and infidelity, America and its allies,” he said.

The UN’s envoy to Yemen last week condemned the group’s offensive in Marib and called for negotiations.

“The conflict in Yemen has taken a sharp escalatory turn with [the Houthis’] most recent offensive in Marib governorate. I have condemned this many times since early last year when this offensive operation started, and I will repeat my call now: the attack on Marib must stop. It puts millions of civilians at risk,” Martin Griffiths told the UN Security Council.

The Houthis evidently have better capabilities, after Iran delivered loitering munitions. Not that they didn’t have the upper hand prior to that, anyway.

Frankly, the Saudis are inept idiots in panic mode and are now shooting down kids toys. I am sure there is upset smart kid in Riyadh who lost his drone.

According to comparision to traffic line on the road the “toy” was very smal.

Down with the Jewish House of Wahhabistan…feed them to the Dogs….

” and I will repeat my call now: the attack on Marib must stop. It puts millions of civilians at risk,” Martin Griffiths told the UN Security Council.”

The UN demands to halt military operations whenever the Syrian Arab army, Houthis and Donbass armed forces are winning the fight against NATO tyranny , is all too common.

Yeah but who is listening any longer to these AngloZioNazi Institutions? in my personal opinion the North Atlantic Terrorist Organisation is completely done, they have lost ALL CREDIBILITY…too many people know by now the game that is being played & that they are a bunch of Lying & Deceiving Paedophile Elite Parasites…(here in Holland that is, especially Muslims)…

The Snake is eating its own Tail….

It amuses me that ‘Biden’ is effectively dumping MBS in Saudi Arabia, just as Israel is courting the Saudi’s.

MBS is compromised…he screwed up & won’t become King is my bet…Wahhabistan is Jewish Controlled Opposition anyway, Satanyahu & Machamad ben Shlomo just decided it was time to come out of the Toilet…

Not just any dog please? We need a dog that eats its own feces so they get reborn as dog$hit again and again…

Hehehe…yeah you are a genius…..

This looks like a diesel motor, normally found on long range uav’s, probably (for sure) supplied by iran. The avionics and guidance system cannot access Yemen from Saudi Arabia or any other mean of transport, so it is 100% trafficked from iran

It’s got to be something like a 100cc Chinese engine. It’s a toy RC – it could probably carry a smoke grenade for 20km.