Shortly after imposing a naval blockade in the immediate  aftermath of the Qatar diplomatic crisis, one which left the small Gulf nation not only politically isolated and with severed ties to its neighbors but potentially locked out of maritime trade and crippling its oil and LNG exports, on Tuesday SkyNews Arabia reported that Saudi Arabia has given Qatar a 24 hours ultimatum, starting tonight, to fulfill 10 conditions that have been conveyed to Kuwait, which is currently involved in the role of a mediator between Saudi and Qatar.

According to media report, among the key demands by Saudi Arabia is that Qatar end all ties Muslim Brotherhood and Hamas.

While there was little additional information on the Ultimatum and more importantly what happens should Qatar not comply, Al Jazeera reported that Kuwait’s emir, Sheikh Sabah Al Ahmad Al Jaber Al Sabah, left Saudi Arabia on Tuesday after holding mediation talks with the Saudi King Salman bin Abdul Aziz to try to defuse an escalating crisis between Arab countries and Qatar. No details were given on the talks.

In addition to Saudi Arabia’s aggressive approach, Egypt’s Foreign Ministry accused Qatar of taking an “antagonist approach” towards Cairo and said “all attempts to stop it from supporting terrorist groups failed”. Qatar denied the allegations, with a Foreign Ministry statement describing them as “baseless” on Monday.

Speaking to Al Jazeera, analyst Giorgio Cafiero of Gulf State Analytics, a geopolitical risk consultancy based in Washington, DC, said: “I think the Kuwaitis as well as Omanis … fear the prospects of these tensions escalating in ways which could undermine the interest of all six members of the GCC.

“There are many analysts who believe that a potential break-up of the GCC has to be considered right now.”

“If these countries fail to resolve their issues and such tensions reaches new heights, we have to be very open to the possibility of these six Arab countries no longer being able to unite under the banner of one council,” said Cafiero.

He added that if tension escalates, some have warned of a “military confrontation”.

lololloolloollollol this made my day…

The emir has no other choice than to make his deal with Iran. The story with muslim Brotherhood and Hamas is a pretext.

Indeed – there is something deeper going here and it may be all about Qatar giving up on seven years of proxy war against Syria to get natural gas lines into EU market. The only other big option for Qatar in current expanding natural gas market could be China – an expanding market located basically on other side of, wait for it, Iran…

Qatar wealth is vulnerable.
US can have the Offshore accounts seized.
Some Qatar wealth can escape via limited airline routes.
Disconnecting Qatar with Iran…..by either Invading Qatar or by Qatar submitting to
Riyadh. …and paying 100s of Millions in the submission.
Egypts on board. ..as they are cash whores themselves to House of Saud.

Allah says show me the money : )

Any hint of a deal with Iran, or even a message of support or humanitarian aid (Qatar has asked for food and water) would be declared a hostile act and the Shriners war wagons will roll. Lots of non-muslims to kill by accident.

Or perhaps to ‘preserve the piece’ the US will declare an emergency and simply ‘take over’ – they do have a very large base/regional HQ in Qatar.

This is something internal that have warped into something international.
This time, we may spank the Qatars, for what they have done, but its never to late to turn.
Secondly, everybody knows about Saudis, and Egypt, (yea, we know they are assh….., but they are our assh……, so shut up and comply) and finally, even we should mention Brits(creator of the present Saudi-Arabia assh……) and France(Africa) but the Pirates on the Potomac, in the District of Criminals, in the Imperial Banana republic uISISa, whom is ricocheting everywhere in the back ground of it all.

How this have escalated to what we have now, is remarkable, and I dont think this is something, juts happening right now but planned, and Qatar messed it up, and we know Syria and Iran is their main goal, Yemen and Oman, just an side show, feeded from African country’s, whom is also lead by Assh….. sorry our assh……, making cash on the wars, where Arabs kill each others in millions.

The Saudis, is like the uISISa the problem, their ideology our problem, and we all know it, despite the silence or downright ignoring it, in the league of prestitutes and whorespondents in the rotten to its core the western MSM.
And I hope the rest of the ones whom still is in doubt, the Qatars did the right thing, protect our land and people, in this times, I believe a lot of people internally should them to see whats behind all the “springs” pooping up, and against whom.
Iran isnt the problem, but the Saudi, and their minions, Egypt, is just an open prison camp, and how Hamas and the Palestinians rightfully fight witch I fully support, and have done so, all the time, is gotten into this pathetic attacks on Qatar is another mystery, I have no clue.
Hezb, is of course something else, and my hope, again, is that is any group in the Arab would should seek and hopefully gain some knowledge on how to be, an Arab org, whom is practicing real Islam, and how that is implemented in day to day life, should all go to Lebanon, and talk to the people and Hezb, you may learn something.
And Lebanon in it self, is an secret, pssst, dont tell anyone.

No, the Saudis is ruining and damaging their own land, shaded the eyes of their people, lied and forged the rest to believe in an reality witch is an perversion of everything good in life and morale.
Have nothing to do with the teachings of Islam, at all.
Its them, that is The problem, take them out, and the problem goes away.

No more than the Babylonian Talmud, represents the Hebrew Bible, the Torah.
My final hope goes to the people of the Saudi-Arabian peninsula, and in the kingdom of the Saudis, that this time, you get someone whom is fighting for the people and to restore the law, to benefit you all and not let an regime of crocks ruin it, its your land as it is theirs, take it back.
All this wars are an great sin, never forget that, you have to pay for it and you will, but turn and hope that God is merciful and benevolent, He is, but you must do the work, that is the gift, given to us all.
Love life and dont be a bore.
Cheers.

Blessed is the peace makers.

I can answer that question for 10 points Bob. It was Putin?

One could never trust the Saudi Royal Family; they’ve been up to no good in the ME for longer than anyone can remember. The present King is a corrupt military adventurer and on his way to becoming a prize victim of his own hubris. Remember that “who God will destroy he first makes mad”. King Salman qualifies!

That’s only because they look like seedy bagmen and not real Shriners.

If they looked ‘photogenic’ or ‘cinematographic’, like the Emir of Qatar, they’d be trustworthy – that’s probably at the root of their problem. Like the Yemenis and Iranians , the Qatari is probably more closely-related to Mohammed and has a better claim to be ruling the ‘holy land’ than the Sauds – who got their ‘position’ from the Brits and Americans – do.

The allahs vs allahs let them kill each other because the winner will get 12 gosh virgins in hell.As the global community are waiting for the show to start.

This war will be nice every day we will hear allahwakbar doom doom and raping and kidnapping.

Perfect opportunity for Qatar to send in their terrorists to Saudi.

Military confrontation?! The Saudis cant even defeat the Houthis or win in Syria / Iraq, they’re their luck with a small yet well equipped military? I think its going to be a ‘who blinks first’ scenario as the coalition wants to cower the Qataris more than start a war. Another war with a supposed ally is going to be another win for the ‘Axis of Resistance’ camp.

A Saudi invasion of Qatar would be a very curious proposition. Because Doha hosts the biggest US air base in middle east at Al Udeid with 10,000 US personnel. If Saudi military crossed the Qatari border this base would technically be a target – as Qatari air force uses this same base of operations. Most likely however the site would be operationally frozen by US. But equally that would just show the whole of middle east, and indeed rest of the world, that having a giant US base in your country won’t protect that country from an external aggressor. Which is a ridiculous scenario to ponder – and would completely undermine and discredit any US security pledges.
For all these reasons a palace coup seems the more the likely route of any Saudi attempt to move to forcibly subjugate Qatari leadership. 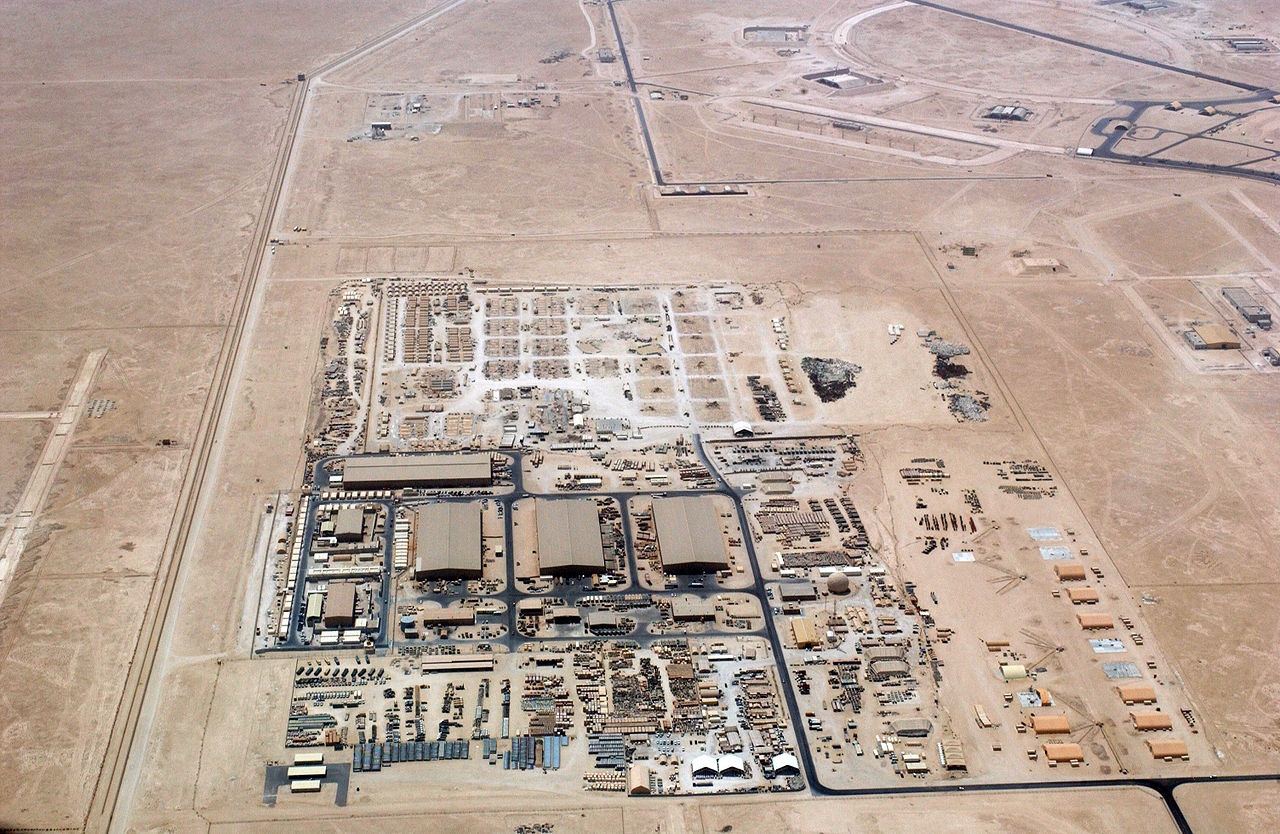 Qatar is flat and aside from swanky hotels and peoples’ houses, there is no ‘cover’. It might even be a cakewalk. Saudis like cake.

the war on terror MUST be taken to the Saudis.

Hell no! Not by us. They’re the only real Arab pals we’ve got.

A naval blockade would be an act of war. Waiting for U.N. condemnation. I wonder what the loquacious Nikki Haley is going to say? Maybe she is waiting to get instructions from Israel.

Nikki is talking to the world by saying nothing.

‘I there anyone along our borders were currently not at war with?’

To which we can now add only the heir to throne of the Kingdom of Idiots would fight a war on twelve fronts when cheered upon by the Emperor of all Idiots elected to the White House. 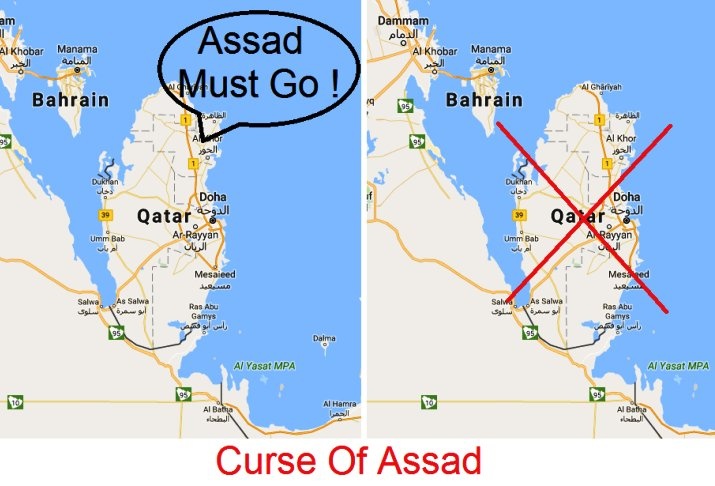 I am a bit confused. Qatar is a very liberal state, and they are funding terrorism? And doesn´t Arabia funds other groups too? I don’t get it.

you can start by reading this good article about the differences between Salafists and the Muslin Brotherhood here: http://www.meforum.org/3541/salafis-muslim-brotherhood

Because Qatar supports civil rights for Palestinians, Israel orders her servant Saudi Arabia to attack Qatar and to starve its people as Saudi Arabia is now doing to Yemen all for Jewish-supremacist.

It’s nice to see evil GCC reduced to only 5. If Iraq claims Kuwait, then it will only 4. Lesser they become(GCC) better for peace and security!

If u get rid of Saudi and Israel, all of these problems we would not even be reading about it here on south front or anywhere else. I really wish one final huge war would break out already to finally take out the trash and have Iran, Russia, and Syria come out as the TOP DOG WINNERS!!!!

You think so? Like ‘getting rid of’ AQ or the Taliban, you’d find there was another layer of something worse underneath. Even God mentioned that when he reset things to zero at the time of Noah and his Ark.

Refreshing Israel is only blamed for it in 3 comments. Are You gone soft or becomming senile.