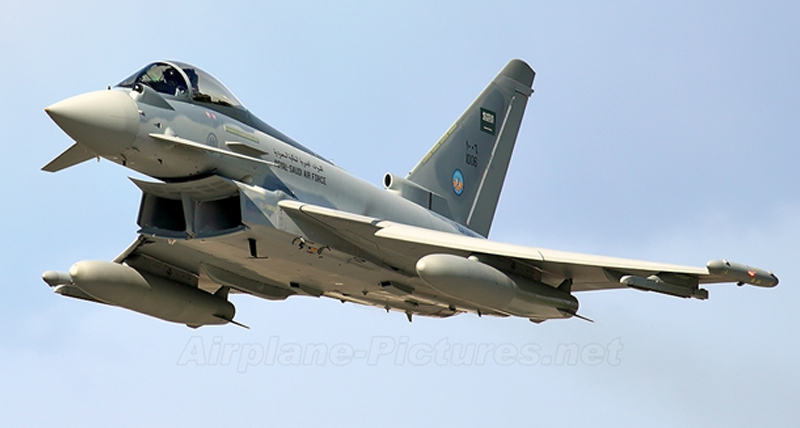 On the final day of the visit of Saudi Crown Prince Mohammad bin Salman to the UK, BAE Systems officially announced that the UK Government has signed a Memorandum of Intent with the Kingdom of Saudi Arabia to aim to finalize discussions for the purchase of 48 Typhoon fighter jets.

“We have taken a vital step toward finalizing another order for Typhoon jets that will increase security in the Middle East and boost British industry and jobs in our unrivalled aerospace sector,” UK’s Defense Secretary Gavin Williamson said commenting on the new contract.

BAE Systems had supplied the Royal Saudi Air Force (RSAF) with 72 Typhoon fighter jets under a previous contract, which was singed in 2007.

The new contract, which worthes more than £10bn according to the Telegraph, will boost the defense industry in the UK and allow BAE System to keep the production line of Typhoon fighter jets up and running, securing thousands of jobs in the UK and even in the EU.

In December 2017, the UK and Qatar singed a £10bn-plus contract to supply 24 Typhoon fighter jets to Qatar, which is facing an Arab blockade led by Saudi Arabia.

According to the Independent, several British activists criticized the new contract with Saudi Arabia and described it as “shameful” due to the ongoing Saudi war on Yemen. The RSAF had used its Typhoon fighter jets on many attacks on Yemen, some of which were even carried out with prohibited weapons, like cluster bombs, also supplied by the UK.

Regardless of all of this criticism, the new contract will likely be executed without any problems, just like several previous contracts. Some Arab experts believe that the Qatari and Saudi contracts are mainly aimed at securing the two countries partnership with the UK and not at improving the military capabilities of these two countries.

Do the jets also come with UK pilots? :D

since its saudia, i wouldn’t joke too much about it lmao

want to conjure a football match?

The UK has an ever growing pool of blood dripping from its greedy, hypocritical fingers. These fighter jets will be used to bomb and kill many innocents in Yemen . .

The Google work-at-home kits and other “Google job” opportunities found in search engine ads and emails are not legitimate work-at-home jobs and are not offered by Google. They are, in fact, work-at-home scams being created by con artists, tarnishing Google’s name and using it to fool job-seekers.]

Everyone knows you’re just a cheap tool used by scam artists, so go take a hike Maria! The same goes for other bots, yourself included.

No, it’s basically just a bribe. It will take years before these aircraft will get delivered and become operational. It could only happen if they were flown directly from RAF stocks right now by RAF pilots.

That just about sums it all up! The UK poliiticians are a mob of complete hypocrites like they have always been. Money and Power first, human lives and morality last; that’s the UK in a nutshell.

Compared to the opium wars etc these days they are hardly being b’stards.

They are even more hypocritical the the US, in that they act so holier than thou, but are guilty of the deaths of so many . .

>>Saudi Arabia buys 48 Typhoon jets from the UK< Saudi Arabia bribes the UK to continue to support its crazy endeavors and to not criticize its gross human rights abuses and warcrimes in Yemen.

Typical UK government, they constantly bleat on about Human-rights but have no problem selling advanced weapons to the biggest Human-rights abusing nation in the Middle East.

Gulf states throw money for jets whereas they can’t operate them. XD. Basically, they are just robbed by UK to stack jets into airfields. XD.

And what it the absolute joke is that Qatar who is blocked by SA also buy jets from UK. XD.

These countries are a real joke. But, you know, the S in Sunnism is for Stupid. XD.

“Increase security in the Middle East…” That is such a load of bollocks!

Hahaha, Trump moves an embassy and the UK gets to make the new Saudi war toys. And ofc they need to have more than Qatar.

Saudi Arabia knows that, if even if MBS holds up a child in public and disembowels said child in public, Theresa May will still sell them arms. Then, LIE on Iran and make up stories about Iran’s aggression etc. That is the disturbing and unhealthy relationship between Saudi Arabia and UK. Uk is shocked that, Jeremy Corbyn called out the government for collaborating with Saudi Arabia in the mass murder of Yemenis??? Theresa May even LIED about Saudis intelligence saving UK lives???? She is the same person who sat on an intelligence report which rightfully linked the Saudis with their funding of the their worldwide group of Madrasas. She sat on it without making it public???