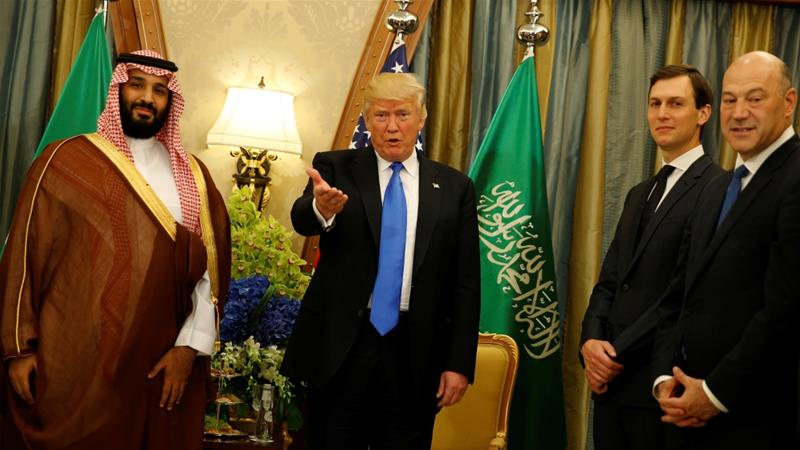 On September 4th, a sermon delivered by Abdul Rahman al-Sudais, the imam of the Grand Mosque in Mecca appears to be interpreted as a sort of interlude towards normalization of relations between Saudi Arabia and Israel.

In his sermon, Sudais said that Islam requires Muslims to respect non-Muslims and treat them well.

He pointed out that Prophet Mohammed “performed ablution from a polytheistic water bottle and died while his shield was mortgaged to a Jew.”

The photograph’s caption reads “I am a Rabbi, not an Imam.”

According to Sudais, the prophet was so good to his Jewish neighbor that the latter converted to Islam.

Sudais also talked about the need to “correct and purify the Islamic faith from false and suspicious beliefs.”

He had previously urged for peaceful inter-faith dialogue and preached Islam’s opposition to “explosions and terrorism.”

US President Donald Trump, when the UAE and Israel signed a normalization deal, predicted that other Arab states would soon follow suit.

The Emirates became only the third Arab country in history to recognize Israel, after Egypt and Jordan.

Trump’s son-in-law and adviser Jared Kushner said that Jerusalem (since it recognizes it as Israel’s capital) and Riyadh will ‘do great things together,’ despite silence from Saudis on the normalization between the UAE and Israel.

Saudi Arabia has agreed to allow Israeli flights into its airspace. Saudi Foreign Minister Prince Faisal bin Farhan recently said the kingdom was open to establishing relations with Israel on condition that a peace agreement is reached between Israel and the Palestinians.

Reportedly, during an American delegation’s visit at Riyadh on September 2nd, headed by special White House advisor Jared Kushner, a proposal for a triangle accord between Israel, Saudi and the US was suggested, similar in fashion to the recent Kosovo-Israel announcement.

Sudais’s words sparked a wave of protests on social media, where many Arabs and Muslims claimed he was paving the way for Saudi Arabia to follow suit with the United Arab Emirates and establish relations with Israel.

“He is paving the way for normalization and treason,” Sagheer commented.

Islamic cleric Muhammad al-Shinqiti of Mauritania accused Sudais of exploiting the podium of the Grand Mosque in Mecca to promote normalization with Israel.

The Saudis are delusional. People are not light switches; one moment you’re a religious zealot, and the next moment, the nicest guy on the block. It doesn’t work that way.

Zionist movement needs illusion of stability and acceptance of Israeli apartheid terrorist regime by other Zionist controlled regimes like UAE, Saudi’s and others. US are in hurry because Zionist project in Middle East and US are starting to fall apart completely so they must preserve facade as long as possible.

US and Israel are falling apart? lol

Aborted child of peace is “born”, as dead as one can be. There never was more futile, useless, visible to all absurd attempt to put decoration of “peace” and “unity” over the pile of shit. A pile of shit represented in 2 Zionist regimes one of Wahhabi-Takfiri origin and other Terrorist Zionist regime in their fraternal Zionist embrace. US seams never weaker and in hurry to save the appearances of their crumbling Zionist Empire in Midle East.

Iran should erect the monument to Geroge Bush the Idiot because of his destruction of Iraq. That’s wxy today Zionist Empire is falling apart and Iran is growing from strength to strength.

Mbs and MbZ are compares …

Go away you stupid cunt…. I hardly even read your crap, I don’t care what you think and don’t want to convince you in anything….just go away.

If “others” are morons like you they can go fuck themselves also together with you effing idiot! Fuck off now!

My comments are for the ‘ummah’ … lol

It’s a natural alliance really, Israel and the GCC need to work closely together. Now that we have a peace deal, Emiratis can come and visit Jerusalem and see their holy places which is something Iranians can only dream about as they will never step a foot here. Saudis can have the same option, and pray at their Mosque.

The GCC is a zioblock component that has been mass murdering Muslims for Israel and extensively involved in running the Jew’s terror war against humanity for decades. If they’re smart they’l change their tune to make amends for their crimes against humanity and support a regional coalition to clear the IDF and Israeli government out of the occupied territories and police the implementation the UN resolutions that Israel in in violation of. Like the right of return. So that Israel can be voted out of existence and replaced with a Jew free unified Palestine. As part of abolishing Judaism worldwide and dejudifying the planet so that it’s Jew free.

There’s no solution … jump from the nearest tower or bridge

Shilling for blood sucking Jew pedophile mass rape cultists says that you’re the one who’s disturbed, not me.

Your Jew world order satanic pedophile overlords are planning to kill every man, woman and child in Israel as part of their post human era omnicide plan. Just like they genocided millions of Soviet and European Jews last century. And Zionist Cuomo and Jew Zucker just sent more Jews to the ovens than any mass murderers since Stalin and Hitler. Many of whom died during the intubation tortures.

You’re better off alive as a former Jew assimilating on a Jew free planet with a good future than dead on a post human world with a Jew world order caste system slave species walking over your graves.

Just give me your address … I’ll put YOU right

You refuse to engage in a rational debate, which you know that you’l lose and lose badly. So you spam the thread with immature stupidity.

Go put it right in your anus and stop farting.. no difference between your mouth and anus anyway – both are dumb, filthy shitholes.

So nothing to say jihadi?

Your black boyfriend is jihadi, you dumb monkey. Go blow his banana coz BLM/BananasLivesMatter! and when you finish him, say – next.

When the mullahs regime falls, the citizens of Iran will also enjoy peace and prosperity.

Prosperity go on….BTW KSA, (The petroleum sector accounts for roughly 87% of Saudi budget revenues, 90% of export earnings, and 42% of GDP.) Israel….do I have to say how much “aids” this apes get….? really prosperity…really you low life.

MORON the deal is to buy F-35 you ape, UAE come out and said it. BUT HEY those guys are Zion you know and what zion are known for “lying”. October is coming and Iran will be far far ahead in military in ME.

The Future is about to Land …

Shia?…. LMFAO hahahahahahahah ohhh no you are retarded kid go back and play your COD and suck on your father dick kiddo. I’m not Iranian you ape.

Why so many threats Ali? a barking dog doesn’t bite.

Lion doesn’t bark. So Am I. Coward.

I have no need to rent, like many Iranians in the West, I have a number of properties. I rent to others. Apparently your cognitive dissonance is so severe that you have to tell yourself all this nonsense in order to convince yourself to live in your failing third world country.

I wrote : ” like many Iranians in the west”. My parents are Iranian, I look Iranian and the mentality is partly Iranian, but I am not Iranian. Be sure that when the mullahs regime falls I intend to take advantage of the real estate opportunities that will be created.

“they will also outlive is the Amerikkkan regime. ” – It’s clear to me that you have to believe it. It is a very essential psychological mechanism for those who live the way you guys live. But still try to think about why your rulers send their children to study and live in the US.

WAR is in America – Murican Mutants killing each other every day LOL.

you braindead zombies all are already “infected” with hate and stupidity (and coronavirus!), hopefully you’ll all die soon. The world will be a better (and cleaner) place without that vile global terrorist organization – United Police States.

May it ever be thus

You are particularly funny mullahs support. When the mullahs regime falls I will buy whole streets from people like you.

Where is the scumbag today?

His days of torturing are finished … hello?

He’s DEAD and the Caiphate with him … ROTFLMAO

Why begin? It’s already done. Beside saudis are jews.

Finally they have uncovered theirs faces, and who is theirs master. Wahhabi pseudo Islam garbage.

Drain the swamp! Yeah right, this shithead did nothing for 4 years except serving Israel.

Daesh was destroyed by Trump and the Kurds he supported …

Mosul was liberated by Trump and the Kurds along with others …

Lol only braindead Murican morons believe that laughable crap. Daesh/ISIS whatever you call that Mickey Mouse organization (U.S.IS or ISISrael is a better name) was actually defeated by SAA/Russia in the west and Iraq/PMU in the East. Kurdish thieves just stole syrian and iraqi land while USAF mass slaughtered syrian and iraqi civilians.

An infected Muslim … not too much different than most other Muslims

These are your fate … muslim

Barking at the wrong tree you little 5 y. old bitch, I piss on muslims and I shit on you… your ex-president Obuma is muslim (and a monkey like you), probably your black boyfriend is also muslim.

Jevvs and muslims – these are your fate. And some Mexicans :D

won’t happen as long as the king is around but once he’s gone, mohammed bin salman (of fake da vince painting at 450m$ fame) will kow tow to prime slime kushner (who is promising nukes to the ksa) and approve anything suggested by the slimey jew (someone ought to put a 10m$ bounty on his head).

Got a ‘hard on’ for Kushner? pmsl

Got it … so in fact Islam REALLY REALLY HATES JEWS