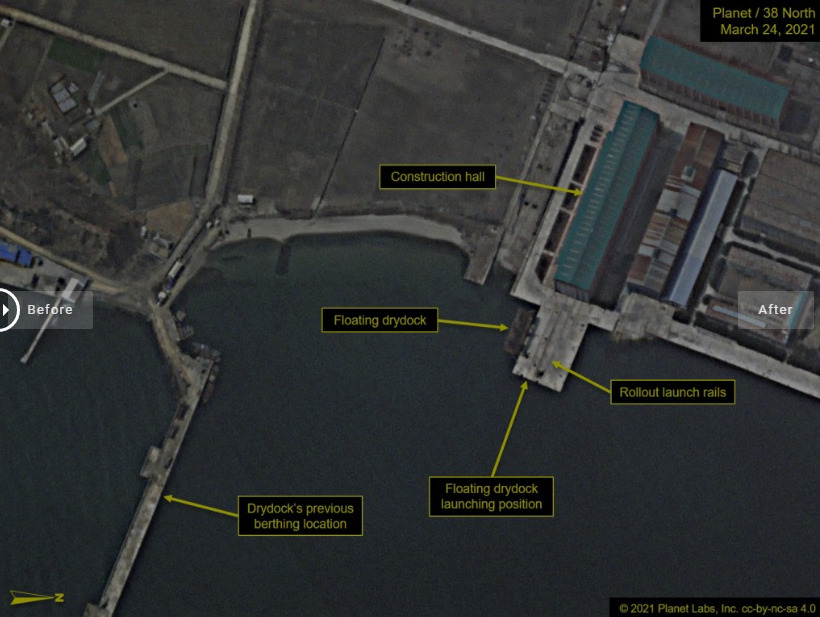 Commercial satellite imagery of the Sinpho South Shipyard from March 24, 2021 indicates that the floating drydock, normally moored at a nearby pier, has recently been repositioned alongside the construction hall’s submarine-launch quay.

SLBMs have appeared regularly at the North’s military parades, the last being the Pukguksong-5 which Pyongyang unveiled in January 2021.

The North launched two cruise missiles from the port of Onchon, South Pyongan Province, into the Yellow Sea on March 21 in the first known weapons tests since the start of the U.S. Joe Biden administration.

The North then fired two short-range ballistic missiles into the eastern waters off the Korean Peninsula from Hamju, South Hamkyong Province, on Thursday morning just hours after Washington warned Pyongyang against any provocations that could destabilize the peninsula.

The launch of the new submarine is something that has been expected for the past couple of years for several reasons. These include:

·       Kim Jong Un visited the construction hall at Sinpho on July 23, 2019 to inspect a ROMEO-class submarine being modified to accommodate missile launch tubes.

·         The parts yard adjacent to the construction halls, where large parts had been observed during the construction process, has been empty since last summer. This suggests major structural work has been completed.

Separately, on March 29th, North Korea said that the U.N. Security Council showed a double standard as its sanctions committee criticized the country’s recent missile test as a violation of U.N. resolutions.

The United States called for imposing additional sanctions and tightening the implementation of existing measures, denouncing the test as a violation of U.N. resolutions, according to Jo Chol Su, director-general for international organisations at North Korea’s foreign ministry.

Jo said the meeting was “designed to negate the right of our state to self-defence,” warning it would devise a “countermeasure.”

“It constitutes a denial of sovereign state and an apparent double standard that UNSC takes issue, on the basis of the U.N. ‘resolutions’ – direct products of the U.S. hostile policy,” Jo said in a statement carried by the official KCNA news agency.

“It does not make any sense that only our righteous self-defensive measure should be singled out for denunciation, when many other countries across the globe are firing all kinds of projectiles for the purpose of increasing their military strength.”

Prior to that, North Korea said that the administration of U.S. President Joe Biden had taken a wrong first step and revealed “deep-seated hostility” by criticizing its self-defensive missile test.

Ri Pyong Chol, secretary of the North’s ruling Worker’s Party’s Central Committee, said the test was self-defensive against threats posed by South Korea and the United States with their joint military exercises and advanced weapons.

“We express our deep apprehension over the U.S. chief executive faulting the regular testfire, exercise of our state’s right to self-defence, as the violation of U.N. ‘resolutions’ and openly revealing his deep-seated hostility,” Ri said in a statement carried by the official KCNA news agency.

Biden’s remarks were an “undisguised encroachment on our state’s right to self-defence and provocation,” he said, adding Washington might face “something that is not good” if it continues to make “thoughtless remarks.”

“We are by no means developing weapons to draw someone’s attention or influence his policy,” Ri said.

“I think that the new U.S. administration obviously took its first step wrong.”

He accused the Biden administration of “exploiting every opportunity” to provoke Pyongyang by branding it as a “security threat.”

This came days after U.S. Secretary of State Antony Blinken vowed to work to denuclearize North Korea and criticized its “systemic and widespread” human rights abuses during a visit to Seoul with Defense Secretary Lloyd Austin.

Hope for denuclearization talks is there, but US President Joe Biden did say he wouldn’t meet with North Korean leader Kim Jong-Un.

How dare the DPRK invasion-proof itself by acquiring nuclear weapons and missiles to deliver them?

You’d almost think it dared to assume that it was independent of Amerikastani ownership or something.

Quick, order thousands of adult diapers for the infantile, brain-damaged, degenerate little worms in Washington, DC! Even if Kim Jong-eun flushes a toilet the little boys and girls at the State Department and the Pentagon panic and soil themselves.

The sub you will see is a nuclear sub about 6,000 tons with 6 launch tubes. The SLBM carries multiple warheads.

North Korea strongly maintains its right to self-defense, and has serious reasons given the criminal crazy that rules the West, even today the Warmonger gather to the UN to try to prevent Korea to hold a strength of dissuasion, The brave would like Kim Jong to drop the pants to make him do the end of Gaddafi, but the Koreans learned the lesson and don’t make them fall.

All roads to peace with North Korea travel through China. North Korea is China’s little barking dog, creating an imaginary threat so that the true threat, China, appears smaller. One hand creates the diversion while the other hand positions to strike.