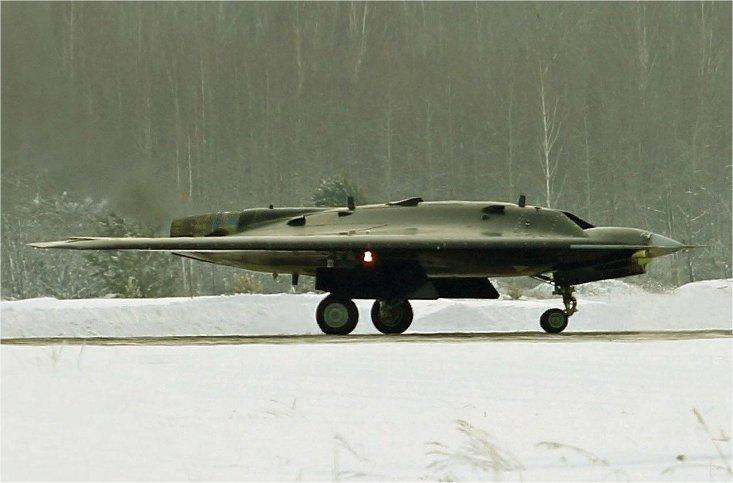 Commenting on the latest satellite imagery, The National Interest said the new drone, dubbed the Sukhoi Okhotnik-B, or Hunter-B, a stealth heavy unmanned combat aerial vehicle (UCAV) being developed by Sukhoi as a sixth-generation aircraft, was first spotted by land-based cameras earlier this year at an airfield in Novosibirsk in southern Russia.

Duygu didn’t provide a date on when the satellite imagery was taken, but it’s likely the photo was snapped within the first two weeks of May. This is because, on May 14, Putin was escorted by six Sukhoi Su-57 stealth jets to Chkalov, for an immediate inspection of the flight line.

The satellite image of the flight line at the Chkalov State Flight-Test Center shows the Hunter-B, Su-57, Su-34, a MiG-29, and multiple Sukhoi Flanker variants. 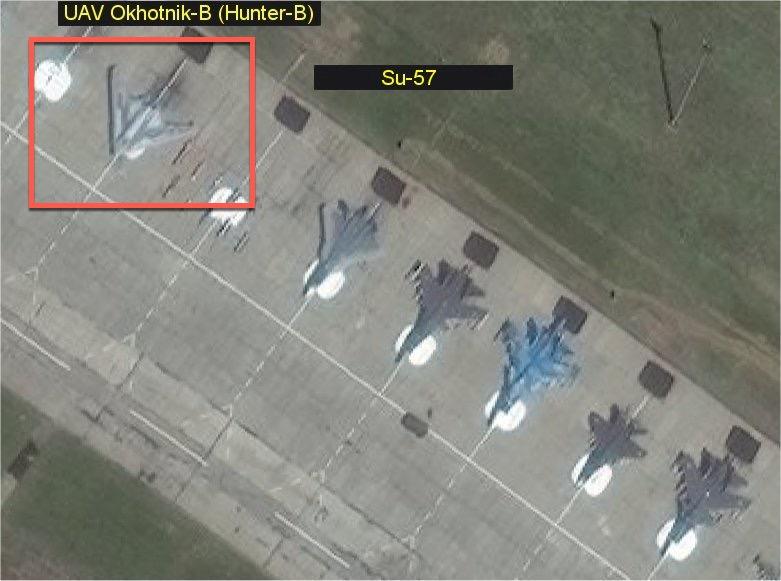 In a planned statement surrounding the trip, Putin hardly mentioned the stealth drone: “In addition to the modern and advanced military aircraft and helicopters that were shown to us, unmanned aerial vehicles were presented,” Putin said. “I emphasize that all the activities in preparation for the serial production of this technology were performed on time.”

The National Interest doesn’t believe the Hunter-B will be ready for series production anytime soon.

Estimates show the Hunter-B is similar in size to China’s Tian Ying drone, the US Air Force’s RQ-170 Sentinel, and the US Navy’s X-47B UAV.

“The Russian military is running multiple UAV-related projects,” Cooper said. “Thus the emergence of this project is perfectly normal.”

Samuel Bendett, an independent expert on the Russian military, said the Hunter-B could begin flight-testing in 2H19 if it hasn’t already done so.

“At this point, it is going to be heaviest and fastest UAV [in Russian service] if and when fielded, but additional testing and evaluation will have to take place in order for this unmanned system to be fully functional,” Bendett said. “Its speed [up to 620 miles per hour] and weight — up to 20 tons — means that a host of aerodynamic, electronic and high-tech issues need to be worked out.”

Besides the nuclear arms race between Russia and the US, both countries have been modernizing their militaries with new technologies, including developing new fifth-generation fighter jets, UCAVs, and hypersonic weapons. The world is on the cusp of a significant conflict, once global trade crashes and the world is thrown into a trade recession or even a depression, the probabilities of conflict will soar. According to the chart below, maybe that time is now.

But can it fly and defy gravity , there is a gravity issue over there .

I wonder how it got to Syria? On the backs of Jewish slaves perhaps?

Could be worse, could be the political gravity of Canadian procurement at work:

Ah fuck dont even start on that, we dont want the f35 because its junk, at the same time boeing is pissed at us, for bombardier subsides.

We fucked ourselves once again!!

A drone that is as large as a Fighter, how much ordnance does that thing carry…?

The Germans designed all the great American planes.

Yes, F-22 is the best German plane in the world.

I thought Raptor was an american airplane.

Jens doesn’t do irony or humour, just lots of boings.

No, they didnt. Hellfire was copied and redesigned as the well known Stuka as a very good example.

Russia also bought in Catalinas and were allowed to re-design them for own use. They had nothing for long distance and mainly was used as internal ones.

2 of 10 jets shooting naziplanes down was american airplanes too. Those was given to them, because they could not cross over the Nazi airdefence in Holland and France, but they were exelent in east, where the germans hardly had any air defence.

You also forget Russia hardly had any heavy bombers until the last Year of WW2. Before that Boing had good ones, where the old B52s are still in use in Bahrein in the same very big serial.

10.000 Boings are flying today as civile transportation. Even Iran use them.

“The National Interest doesn’t believe the Hunter-B will be ready for series production anytime soon.”(c) up for a rude awakening.

Should try it out in Syria, Idlib sounds like a good start.

you are a huge embarrassment for your parents… poor monkeys. lol

Dont make monkeys complain to UN. Our pigs already have many sticky note there.

Just like Palestines, they want to have their land back and move arabs to Yemen.

The even has demanded for a crusade removing jews and arabs from the region and also will educate more Christian and sekular priests.

They are as the monkeys very nice, and dont name it as pest control even they by that could be sponsored by MonSanto.

There are plenty of nukes at Incirlik, kill the Americans and Turkey is a nuclear power.

The B2 is a copy of a German Horten Ho 229. The US has never been able to design planes, all the great American planes were designed by Germans, that the US enslaved at the end of WWII.

No, they didnt. Hellfire was copied and redesigned as the well known Stuka as a very good example.

Russia also bought in Catalinas and were allowed to re-design them for own use. They had nothing for long distance and mainly was used as internal ones.

2 of 10 jets shooting naziplanes down was american airplanes too. Those was given to them, because they could not cross over the Nazi airdefence in Holland and France, but they were exelent in east, where the germans hardly had any air defence.

You also forget Russia hardly had any heavy bombers until the last Year of WW2. Before that Boing had good ones, where the old B52s are still in use in Bahrein in the same very big serial.

10.000 Boings are flying today as civile transportation. Even Iran use them…

‘2 of 10 jets shooting naziplanes down was american airplanes too.’ (sic)

Check it out. USSR got more then 13.000 airplanes from west inclusive some spitfires. They came in from Iran by Qaum by road and train.

https://en.wikipedia.org/wiki/Bell_P-63_Kingcobra as well as Cobra 1.

I will not waste my time finding facts for scores. What You dont know, seemes not to exist :(

Its mentiones here too:

Apparently you missed the comedy of your own previous comment – you wrote, ‘2 out of 10 jets shooting down naziplanes…’ About World War II – JETS.

It was mant as record holders shooting down nazi airplanes.

The P51 Mustang, Americas number one fighter was a British design and powered by a de-tuned Rolls Royce Merlin engine manufactured by Packard in the US. Back then the US was like China a decade or two ago, massive manufacturing ability, but low tech.

USA was far behind in production because USA was in Chamberlain mode until 1938.

In 1938 they only was worried for the upcomming Japanese sun because the negosiations didnt do, as USA hoped for.

Thats goes for all military production. If You would say US was far behind in inovtsions and production it was in ships for transportation, tanks, anti tanks weapons and mines.

Whatever You say facts are, that it was Britts and mainly USA which were able to bombarde the German prodution zones as well as civilians to evaporation and not Russians.

In Your Rolls Royce – Merlin insisting, You forget the most important, which is industrial capasity to make those many planes and educate personal for them as well as making airports with dynamite and buldozers.

The magic innovation is forgotten by You. The revolution for PCs was not the cjip only, but the ideas making a combined machine adding the whole picture by using the same things for different jobs and even letting them find themselves. That was what Bill Gates did. He didnt invent most of the things.

The usual crap. It flyes very well and is a good jet. The problems is its to expensive because its not that much better as new generation for the price.

If you could believe those number :P Those numbers might be true IF You come from Perfect front, use a wavelength of radar ment EXACTLY to be absorbed by the coating and the weather is right Those numbers are about 5% of the actual truth of what a radar cross section is… its an utter simplification basically meaning nothing in real terms

The basic B-2 Spirit concept is a flying wing – a design concept that was patented by Hugo Junkers in 1910. You lack even the most basic understanding of these concepts – hence your trolling attempts are so pitiful.

Kinds of debates like this are very unusefull. We also have copied each other.

The main succes is, if we make usefull products. Danes today are succesful, because we have copied in a lot, has done it to our own and invented on that.

We dont tell Syrians and Iraqiens invented our farming. Actually we have few invensions not based on others from other countries. Its about handling.

In my lifetime I almost only see we have made windmills to spread all over the world and own as well as in good and bad copies.

In that sector the chinese didnt make the solar cells for elctricity at all, but they have maneged to make them cheeper, so we make plus in the economy and see many good and some bad copies as well.

Danes even copied bronze in the bronzeage having no bronze ourselves. By that we also copied much more then swords and even exported.

Descreibing nations and persons as thieves mainly make no sense. Even if You go down random in the history book, You see the same thing. When danes went into modern farming about 200 years ago, we imported almost all machinery from England and some from Germany too.

We only has smiths for horseshoes and guns. But soon after we started copying and well as making tools for own local conditions. Many of those were succesfull and many also had to close. But danish connection to Germany and the rest of the world are based on that and mainly not farming.

Thats how innovation is. You copy and learn and can use Your knowledge level to produce semilar things or advanced things being their own innovations.

Nothing wrong in wings like Jubkers in 1910. But did it win ww1 and 2. No it didnt. But Junkers in stead made many other very good aeroplanes being very succesfull in WW2.