An American geopolitical intelligence firm, Strator, has released satellite imagery that allegedly prove that 4 Russian Mi-24 attack helicopters have been destroyed and a Syrian MiG-25 aircraft damaged by ISIS militants in Syria. According to report, the attack helicopters and the warplanes were located at the T4 air base in the Homs province, near the city of Palmyra. And ISIS artillery units succcessully shelled the airbase.

The Russian Defense Ministry has rejected the  reports:

“All the Russian combat helicopters staying in the Syrian Arab Republic are performing planned assignments to destroy terrorists. There are no casualties among the personnel of the Russian airbase,” a Russian news agency, TASS, cited Russia’s Defense Ministry spokesman Major-General Igor Konashenkov on May 24.

“As for the photos of the Syrian airbase, the burnt aircraft and motor vehicles, as well as numerous craters created by reactive shell explosions have been present there for more than one month. This is the result of fierce fighting for this aerodrome between the Syrian government troops and militants of terrorist groupings,” Konashenkov added. 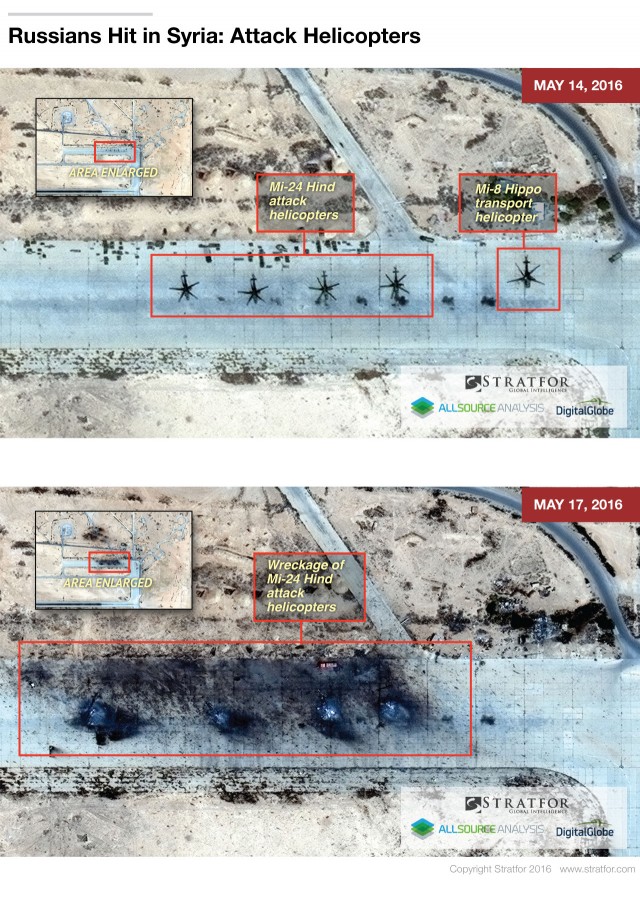 The images were released by Stratfor on May 24. The US think tank also claims that an ammunition depot has been destroyed. We remember ISIS claimed that its militants destroyed 4 Russian attack helicopters and 20 trucks loaded with ammunition on May 14. In turn, the pro-gvoernment forces said that an accidental explosion had taken place in an ammunition storage area at the T4 air base. 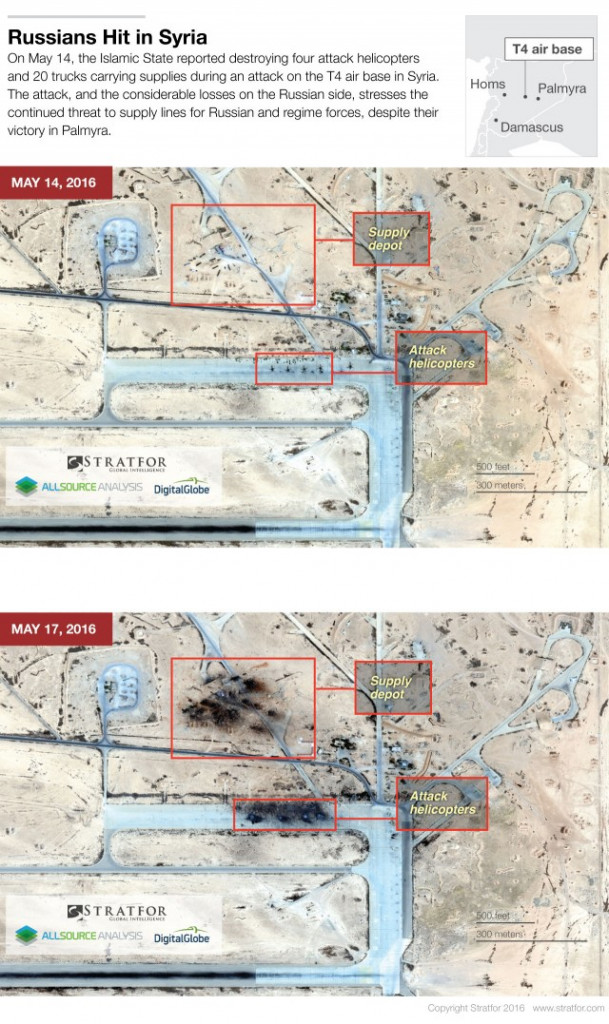 Strator are a pointless outfit. Maybe they have been destroyed. I would put more store in them claiming to have seen Father Christmas.

Stratfor is definitely an organisation biased in favour of USA. However, the Russian ministry of defence didn’t deny what Stratfor said or revealed. It just used clever use of words neither confirming or denying. If it was fake, their statement likely would have been categorical denial.

Hmm, something has definitely been shelled there. However what evidence is there to suggest that A) These are Russian helicopters (Syria operate the same types I think) and B) These are actually burnt helicopters? It is quite difficult to see anything there.

As an idea: Stratfor is a common business. Such claims, with “nice pics”, are a good idea to generate some traffic to the website and sell subscriptions) This is why the real damage doesn’t matter.

It isn’t Stratfor searching advertising, but are Masdar-Southfront looking for money from saudi-qatari’s vaults:

I said yesterday this is fake picture, it’s easy to see it.

Stratfor is one more Israhell first outfit running the U.S.

The first image is definitely fake, at least partially… look at the two leftmost helicopters, they are identical ! It means the same helicopter picture has been used twice in the montage. If the first image is retouched we could presume that the second one is retouched as well. Now the question is : what’s the benefit for Stratfor in making/spreading fake pictures ?