There is a panic among the powerful in the United States. The front runner Bernie Sanders is the candidate they need to defeat at all costs, or he at least needs to be slowed down by the other contenders. They are doing everything to minimize his impact in the South Carolina primary this Saturday and especially on Super Tuesday on March 3 when 1,357 delegates will be chosen to represent their respective candidates at the Democratic National Convention starting on July 13 in Milwaukee Wisconsin.

This past Sunday the alarms went off in the Democratic Party establishment, and among the wealthy in general, when Sanders was beginning to be described as the favorite to become the Democrat’s nominee.

Self-described as a social democrat, he gained great momentum in the Democratic race by winning by a large margin the Nevada primary with a significant amount of Latino votes, winning the popular vote in the Iowa and New Hampshire primaries as well, and accumulating more delegates than the other pre-candidates. But he is not accepted by the party’s National Committee’s inner core or especially by its dominant figures, such as Obama, the Clintons or another pre-candidate and former vice president Joe Biden, still a favorite of those bodies for the nomination. Of course, Wall Street or the corporate world, where the war industries and the big pharmaceutical and insurance companies would be badly hurt in the event the Senator from Vermont actually was elected to the White House.

But also all the very rich are concerned because they know a Sander’s presidency would implement tax reform that would make those that have more pay more, the opposite of what has happened in the last decades where many corporations pay no taxes at all. Trump is a savior to them and their large fortunes who barely contribute to the treasury irritating extreme inequality, which already equals or exceeds the number of poor that existed before the Great Depression of 1929. The so-called American dream never existed, but it is even further away now in a country with millions of poor, people resigned to living on the street and a population increasingly afflicted with chronic-degenerative diseases, and more and more millions with no access, or very limited access, to health services. It is a real paradox that Cuba, with a blockade reinforced almost to the point of asphyxiation, possesses health indicators that are higher than those of the country blockading it, the greatest imperialist power in history. There is data from the World Health Organization and the United Nations Children’s Fund that makes that very clear. In the deterioration of the United States with its neglected education system, it can’t hold a candle to Cuba’s literacy achievements where a 2015 CIA, yes CIA, study reveals that Cuba is the country with the 5th highest level of literacy and the United States is not even in the top 20.

According to a recent Reuter’s poll, Bernie Sanders leads all his rivals concerning the Democratic voters and with the largest part of the African-American vote nationwide supporting him. The only state where he does not have the African-American vote is in South Carolina, where the up until now almost disappeared former Vice President Biden appears favored to win the state. However, analysts argue that multimillionaire Tom Stayer’s intense campaign in this state will subtract a number of traditional votes from Biden, which may give Sanders the victory. In that case, he would score almost a fourth victory in a row, since in Iowa he needed only a few tenths to win the number of delegates, even though he won the popular vote.

The issue with Sanders is not only his program, which is consistent, very humanistic and has a deep social conviction. Perhaps even more worrisome for the one percent is the great trans-ethnic and trans-generational coalition that the veteran politician has been building since 2018, which may transcend him. If the Reuters poll reflects reality and if the analysts’ predictions about the preference of the Latino and youth vote for the Senator are correct, he may very well get a good slice of the Super Tuesday delegates and, with the shock wave that it creates, he could roll on to win California and Texas, with their enormous delegate weight.

Could Sanders beat Trump in 2020? It seems very difficult to think that the establishment, historically capable of anything to suppress an adversary, accepts such a scenario when the wind of fascism and adherence to the status quo circulates in the corridors of the White House. But in times of serious political crisis, nothing should be dismissed in advance. Especially because a movement as significant as the one supporting Sanders could propel him to the Democratic nomination and that in itself would be a huge political feat.

What is very clear is that neoliberal capitalism is no longer accepted by voters in almost any country, including the United States and this is partly what explains the fascist temptations in sectors of the ruling classes.

From the get go you show your intentional ignorance. Sanders has NEVER said he was a “social democrat.” He has consistently said he is a Socialist of one kind or another for over 40 years. A revolutionary one, a Trot and more recently a Democratic Socialist. But a Socialist nonetheless. One thing he is not is a Democrat. He has never been a member of the Democratic Party and does not even list himself today as a Democrat in the Senate. And the outlier poll you cite which shows Biden and Bernie with statistically the same support among Black voters will face reality tomorrow in South Carolina. And you know that it will be shown to be totally wrong by lying about Black voters being unique in that state in their support for Biden compared to other Black elsewhere. But you earned your Vodka ration from the Kremlin, Igor, for this crap OP which wants Bernie to get the nomination so it’s easier for your favorite, Moron Trump, to win.

First to those (like Jake the snake) that advocate against the people and their sharing of the commons seem to think that not only our thinking but all aspects of our lives should be done for us by rule of private for profit corporations.
Corporatist who have the politicians by a strangle hold by either bankrolling their elections (not to mention their bank accounts) or just shear intimidation of their current strangle hold on the commons…and the list goes on
All those battling this should order & read “Deer Hunting with Jesus” (Dispatches from America’s class war) by Joe Bageant.

“A nation can survive its fools, and even the ambitious. But it cannot survive treason from within. An enemy at the gates is less formidable, for he is known and carries his banner openly. But the traitor moves amongst those within the gate freely, his sly whispers rustling through all the alleys, heard in the very halls of government itself. For the traitor appears not a traitor; he speaks in accents familiar to his victims, and he wears their face and their arguments, he appeals to the baseness that lies deep in the hearts of all men. He rots the soul of a nation, he works secretly and unknown in the night to undermine the pillars of the city, he infects the body politic so that it can no longer resist. A murderer is less to fear.” –Marcus Tullius Cicero 42B.C.

Idiots like Trump and Erdogan don’t read history. They think they don’t need to.

That’s nice and irrelevant plus plain wrong and silly about the situation in the US. I and most Democrats are pretty much Social Democrats. Unlike the Bernie type Socialists, we don’t want to kill the market capitalist goose that lays the golden eggs. We prefer to regulate it and use it in a way to achieve a more equitable and prosperous democratic society. As you well know, Socialism once it has state power can only somewhat work with an authoritarian government. There is over a century of failed Socialist attempts as proof of this. The only Socialist countries left, Socialist NOT Social Democratic, are North Korea and Cuba with a failing Venezuela as a kind of want-to-be.

Southfront needs to stick to war news and stay out of American politics. You just sound stupid commenting on what you do not understand.
Sanders IS a “boogyman” to anyone who believes in personal rights and less government intrusion. But not much more than the rest of the demoncrat candidates, especially the faggot, and only marginally more than the repugnants.

You are correct about them sounding and being stupid about not understanding American politics. But their Kremlin friends know enough to have them do this to help make trouble in our politics. If a Dem wins, other than Sanders, it will be payback time for Putin and his RF.

it is amazing how dumb you are. The only part of the USSA navy that is any good is the the submarine fleet the rest are obsolete garbage built to subsidize corrupt zio corporations. Even then the USSA can’t sustain any war against China for more then a couple of months as most of the parts for the USSA weapons systems come from China dummy and I don’t think China will give them any more parts if they are at war with the USSA.

The F35 is a military disaster but a super successful zio fraud against the American people to extract their wealth.

Even Iran has superior missile technology shown by the recent strategic defeat they inflicted on the USA in Iraq killing hundreds of USSA slaves destroying many USA planes and drones etc. and putting the base out of operation for a month.

Maybe you can hide in your bunker in New Zealand when this happens if you are lucky. 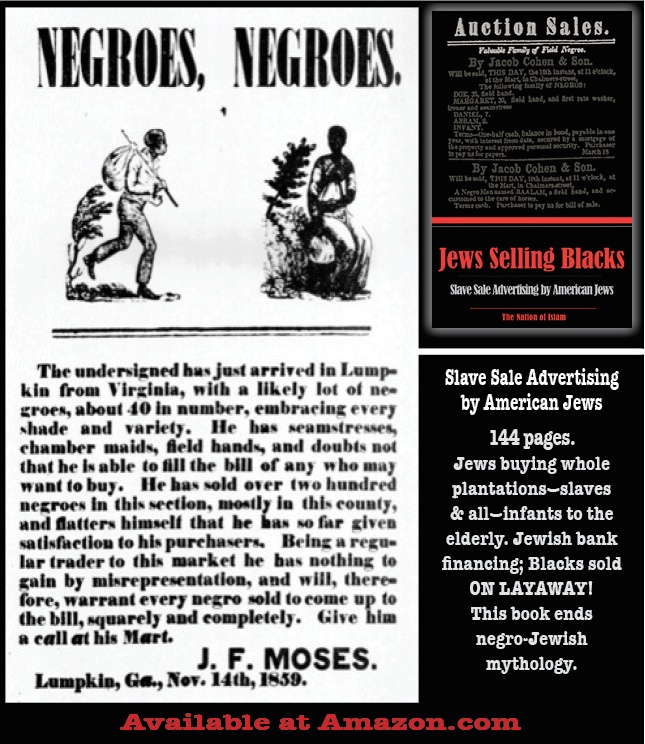 Who rules America?? https://www.dailymotion.com/video/x34eicw
You are a stupid goyim slave. Your purpose is to die for your Jewish slave masters. They will fight to the last stupid slave you. They never risk their lives except for Jews who don’t go along with their lord satan like in World War 2. American’s are slaves and will never do aty such thing never dare attack Russia without the permission of their Jewish slave masters.
Jews selling blacks
https://www.youtube.com/watch?v=iRsrNMKMPuc&t=94s
Jews selling blacks
https://www.youtube.com/watch?v=3_BobWq2sq0

part1b
Despite AIPAC’s efforts to get him un-elected he was re-elected Congress anyhow, unlike the great and fearless American Hero former US Representative Cynthia McKinney, a true American Patriot who tells the truth, the whole truth.
Representative McKinney refused to sign this AIPAC Loyalty Oath to put Israel first even over America, which of course would be a direct violation of the Oath of Office any Member of Congress takes upon being seated.
Why is it such a serious matter to get these signers of the AIPAC Loyalty Oath out of Congress? The reason is obvious, without these Traitors who are sellouts to AIPAC and Israel, America could not have been transformed into a virtual province of Israel.
https://www.youtube.com/watch?v=ImFMcbF2MYY
https://www.youtube.com/watch?v=ImFMcbF2MYY

Well, the actual results are in from South Carolina. And as usual, you are dead wrong. Biden got 60% of the Black vote, Bernie got a puny 17%. You said Bernie would take the Black vote. Time for you to crawl back into your Kremlin basement and cry in your Vodka ration bottle.

The election is fixed. There is no law that it can’t be fixed as it is a private party election moron.