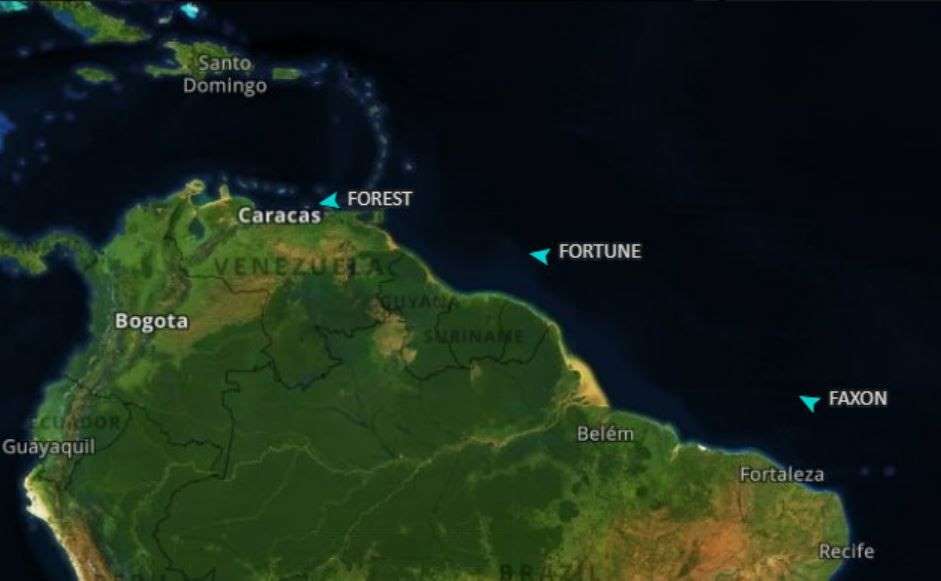 The location of the Iranian vessels early this week. via Bloomberg

The first vessel of an Iranian flotilla of three ships bringing fuel supplies to Venezuela has entered the country’s territorial waters yesterday, demonstrating both nations’ continued determination to thwart US efforts to isolate and blockade the governments in Tehran and Caracas.

The Iranian tanker Forest entered Venezuela’s territorial waters early on Monday, according to tanker-tracker data collected by Bloomberg. Its destination is said to be El Palito port where a refinery is located. It’s the first of three Iranian vessels bringing hundreds of thousands of barrels of fuel to Venezuela.

Following years of unilateral punitive sanctions and an economic blockade by the US, national oil company Petroleos de Venezuela SA is suffering from severe shortages of parts and materials and has been unable to supply the country with gasoline.

While the US sanctions have restricted PDVSA’s ability to import fuel from international markets, they have also prompted the development of closer strategic ties between Iran and Venezuela. Almost all other international oil and shipping companies are now avoiding Venezuela for fear of the punitive – and illegal – measures adopted by the US government.

The two other tankers, the Fortune and Faxon, are due to arrive to Venezuela over the next few days. This is the second major gasoline shipment to Venezuela since the end of May, when a flotilla of five vessels brought nearly 1.5 million barrels of Iranian gasoline and fuel additives, as well as parts for local refineries.

Iran’s foreign ministry has said any attempt by the US to intercept the shipments will be met with “a swift and decisive response.”

In August, the US seized the cargoes of four vessels carrying 1.1 million barrels of Iranian gasoline ostensibly headed for Venezuela. The move was described as the US government’s “largest-ever seizure of fuel shipments from Iran” by the Department of Justice, which claimed the Islamic Revolutionary Guard Corps was responsible for the shipment.

PDVSA and Venezuela’s information ministry declined to comment to the media on the shipments. LINK

CIA trolls will cry and rage ?

Ohh I still do remember fat fuk Trump claiming they got Iranian shipment to Ven and those ships were headed to US. Both Iran Ven said it was BS and guess what….Trump is the best example of Zion+Wahhabi shithead. A.K.A Fake News.

The funny part is that Trumpstein created the PR stunt for the word “fake news”, now from time to time he’s the one spreading it, like every single actor… i mean “president” of the Des-united states of Murica.

It is tempting to harvest potatoes as soon as possible to enjoy them in meals but different varieties can take anything from 70 to 120 days to grow. So, while the early-season potatoes will be ready to consume by the end of May or early June, others will need a bit more patience. https://uploads.disquscdn.com/images/a4020148e96a61533d0265a2cb6da2f0101ad334064a8d075b3aa7cd159f519a.jpg

Yes Jen be patience. Don’t be like Free Ape ?

US is more bark than bite and its sanctions have only strengthened Iran. In any case, US is no longer a functioning state.

True no fatty people. Men are not allowed to wear no T-shirt. Some of the most hairy ones by accident are sold as pipecleaners. Well it was no accidents.

Things happens when the religios police seee they break the laws and those skinny one sha sno money.

You work for the state and Allh is happy for You after that. You even make Our pope in Qaum smile:)

With luck the air bridge between Iran and Venezuela will be materialised soon, it’s more costly but will shorten the time for exchanges between the too and will require them to work together to develop and maintain air transport capacities.

A friend of mine who is from Venezuela( Puerto Ordaz ) told me his uncle still lives there, and he tells that the solidarity between these two nations and the Iranians their logistic help like supermarkets and hi tech for medical purposes was very much appreciated and emotional scenes of satisfactions was so alive when those supermarkets opened with every things they needed for running their household all of this now in cooperation with Russia Cuba China Iran has been like a revival of Anti Americano sentiments growing even stronger and Maduro his army is loyal and very fanatic just like our Persian brothers and Chinese dragons and friends in the battle for a real humane society will never bow for the US zio boot in the neck These nations are building from zero a new system to circumvent all US sanctions to begin with the SWIFT system will be terminated by them sooner than many expect Yuan and Roubles in their original material money status and backed up by huge gold reserves and the implementations of cryptocurrencies for business related payments and sanction evading purposes will be very painful and even destructive for many western imperialist regimes who still have to deal with some colonial post-traumatic stress syndromes to get rid of especially if they do not want to die out of inbreed and degeneration like our Anglo-Saxon & US exceptional’s

Real Americans are being persecuted by their own government, that’s how bad things are in the U.S

Very good. Their Great Leader probatly send unimplyed lazy bum socialist to Iran, so Iran can learn some etnic sing and dance lessons as a kind of thank You.

US is in a state of disarray and heading into a civil war, so it just barks for effect.

ANY GAS? WHERE IS THEM KIKERS?