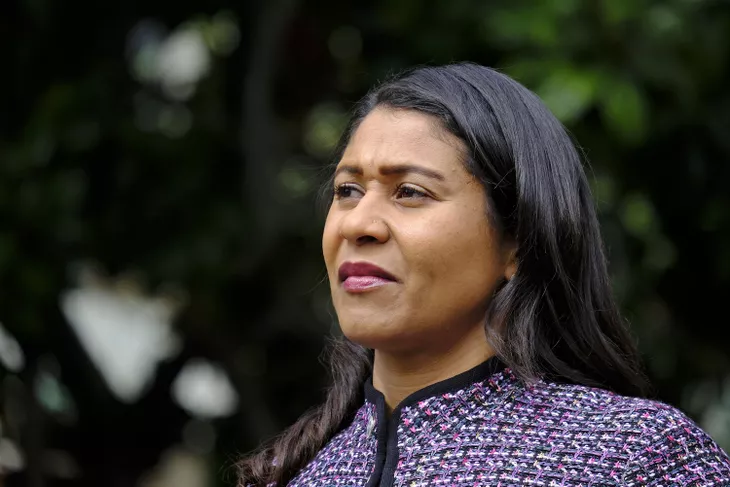 In an interview on July 9th, San Francisco Mayor London Breed said that she was “overwhelmed” by the response by non-black people to the Black Lives Matter movement and those joining in on the protests.

But she also expressed frustration with the “white allies.”

Breed had an issue with the “takeover of the movement by white people.”

“I want people to respect the opinions and feelings of Black people and allow us to decide what is in our best interest. I talk about the plan to reduce the police budget and reallocate those resources to the African American community, and a large number of non-Blacks reached out to tell me what I should do for the Black community. Then, they say what their community deserves because of their challenges as well. That really bothered me. The Black community [of San Francisco] is capable of speaking for ourselves and deciding what’s in our best interest.”

At the same time, she argued that white people can have no way of knowing what’s good for black people. Furthermore, these same white people shouldn’t be allowed to use a rights movement to also ask for help for their communities, because they’re white.

All that from a movement that’s supposedly fighting against racism.

“What’s happening in San Francisco now, and has for so many years, is you have a progressive movement made up of people who are mostly white and feel that they know what’s in the best interest of Black people. I’m over that.

I think it’s important that we support and respect the Black people here enough to know that we have a mind of our own. Because half the policies pushed in San Francisco are “progressive policies” that don’t work for Black people. Because, if they did, why are things far worse for Black people here? In San Francisco, a city where less than 5 to 6% of the population is African American and yet we are disproportionately overrepresented in everything that’s bad: high school dropouts, arrests, homelessness. You name it.”

It should be reminded that San Francisco became infamous in January 2019 for having more drug addicts than high school students.

Also, since it was such a common event, an app called Snapcrap was created, in order to track public defecation.

Mayor Breed is actively diverting money away from the police department to invest in black communities. A majority of black Americans do not support this idea. Overall support has been dropping as violence in many cities has escalated.

To the activists who have been critical of her leadership, Breed had a few words when she was asked if she had been misunderstood:

“Yes, but I don’t care that I am by people who have privilege. Let me be clear: In most cases, they’ve never had to live like I’ve had to live. I had to live in a public housing development that they wouldn’t have even dared set foot in. This is over 20 years, not just two years, of my life. I’ve been working in the trenches for my community my entire life.

And none of these people have been in the trenches when we were dealing with issues of police brutality on a regular basis. Almost every day you’re hearing that someone that you loved was killed. I think part of it is, my experience is what determines how I make decisions. The good news is the people who know me and love me from the neighborhood I grew up in, they understand why I do what I do. They’re not “activists,” but they love and they trust me.”

US is heading for a class based war, than a race conflict. The income disparity and social dislocation is forcing white young people to use the BLM to vent their anger at a failed inequitable system and unsustainable military spending. US economy is now in a new depression era, with no end in sight, while China is booming.

Not heading. Already there. The U.S. Empire is toast.

Well both of you are kind of right … They are “heading”…. yet they are “already there”… It is like Titanic in first moments of hitting iceberg and not starting to sink yet… Where is that zionist – dude “bacon”…or whatever is his moniker… to get some fresh news on what is happening in his country while he is sleeping somewhere in desert in trailer.

He is probably sleeping. :)

Thanks for not letting him disturb my sleep.

I follow US news also, so I don’t need to see what Russian media regurgitates from US media. You should watch what this guy, Tucker has to say about Syria.

Unlike the Titanic, when US hits an iceberg, the iceberg breaks, not the US.

Because so fanatical, one-dimensional, when US soon totally collapses, people like you will commit suicides.

If not…. they’ll live through some kind the nightmare, some will go mad, other will chose to kill others instead of themselves etc. There is way of life… a road projected in every of all our choices and there is a price tag to pay for every of our sins.

Do you know what my sins are?

Bottom line…I know enough not to judge you or any other human being. Deep down I know nothing and judge nobody and I am in peace with my Creator. Maybe sounds crazy but I think that we all are our own walking hell and heaven. And there is no escape from the punishment ever.

Because unwittingly we are our own most sever judge and jury, but somehow we do not know that. That’s all.

True that, we are our most sever judges. Wishing others to commit suicide reflects your internal strugle and pain.

I don’t know …maybe. People can kill themselves sometime for very banal, even stupid reason.

Anyways, right or wrong there are certain things I don’t try to explain . I don’t rationalize about everything.

Everything is a big word

It was just colloquial “everything” which one could translate to “in general”.or “most of the time”. This conversation is becoming absurd. I have nothing else to say on the subject

Get of your high horse and don’t patronize…. nobody explains to me what I do or don’t “need” if not asked to.

amerikans r the least self critical, insecure , self loathing narcissistic peoples on earth—–they believe their illusions

I can agree with that with no problem.

and where do we put, which category… people like our “occupy bacon” who are not

ill-civilized only because they are mental :)

Amerika is already broken, u ignorant peasant…..the titanic believed you’re stupid advertising—-as u sink u arrange the chairs on the flooding deck w Biden and trump…LOL

That’s what Lenin said tho :)

Hopefully democracy will prevail because leftist will be exterminated otherwise

Americunts are literally burning the place down. In peaceful small towns like Portland, they just burnt down the courthouse as the military police thugs beat up some women. AmeriKKKa is kaput and much worse is coming in November.

The liberal gay club is taking over America.

All by design and lazy sissies who let them. Britain won again.

London Breed… Guys at the MI6 arent even trying anymore lol. Its just in your face…

Just because she lived in public housing, she has a monopoly on the knowledge of adversity? Nah, she doesnt know a thing about it. lol What a poser.

The truth is coloured people expect white people to act on their problems.

I often heard this in third countries, ” You Gringos should do something about it, we cant do anything because we dont have any money”. So they expect you to use all your money to their lawyers and their armchairs, while they are spitting you in your face for being an oppressor. Not fair!

The taks is to reject the political term and racial divide and conquer scheme, and mentally simply accept the paradigme that we are all born equal as human beings and the only fight there exist in real life is the social fight.

“Mayor Breed is actively diverting money away from the police department to invest in black communities. A majority of black Americans do not support this idea. Overall support has been dropping as violence in many cities has escalated.”

Typical western-leftist solution to a problem: just throw more money at it! Same shit they’ve been doing for decades with minimal/zero progress.

The “Divide and conquer” game agenda is working well for the Zionists that are hell bent on destroying the US from the inside out here. Blacks vs whites. Gays vs straights. Religion vs religion. Man vs woman. Left vs right. Republicans vs Democrats. South vs North. Oh and the age old classic ‘rich vs poor’. And we fell for it hook, line & sinker. Political correctness, gender correctness. You all scream inequality! Equal rights for all. Whilst that is fair unfortunatly it played right into their hands. Indeed as Admiral Ackbar once famously quoted “it’s a trap!”.

It was a beautiful place once.. priceless that last comment.

I though the US was the best country in the universe? This footage must have been staged….

the fascist enclave SF–the most corrupt city in the US—twice as many bureaucrats per capita than any other city in the USA—where racist self loathing liberals elect incompetent black politicians, despite the black population comprising 6%…blm is corporate capitalism—100 million—cia ford foundation/33 million Soros…..in 2014 in Bild, Soros remarked that blacks were the easiest to manipulate of all groups in the USA….and these idiots claim that vandalism and looting will remedy white guilt, and black stupidity….