Crews of Tu-160 and Tu-95 long-range strategic gombers are on combat alert in the Engels Air Force Base in the Russian region of Saratov, the Russian state-run TASS news agency reported Sunday, citing a military diplomatic source.

According to the report Tu-160 and Tu-95 strategic bombers are now being prepared for combat missions and loaded with cruise missiles.

At the same time, the Russian Navy’s task force for Syria is also reading for combat missions in the country.

The Russian strategic bombers, Tu-160, Tu-95 and Tu-22M have been involved in the Russian military operation in Syria since its start in 2015.

anyway the kh22 pictured in the vid is not accurate. 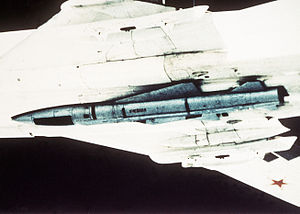 this a pic of the missile

By this time on Monday, large parts of East Aleppo and everyone inside will cease to exist. I won’t argue the horrible necessity of such an action. I just wish more emphasis was put on the choice of targets so this won’t have to keep happening over and over again.

If Russia would send the Tupolevs to level Riyadh and Abu Dhabi instead, the Syrian and Iraqi head-choppers would just melt away. After Erdogan cleaned out his soiled pants and thought about the implications, he would probably change his policies and Ankara could be spared.

those who will cease to exist are the terrorists, rest assured. Cruise missiles aren’t used to aimlessly strike among civilians. If strategic bombers are employed then they have a large numbers of “paying” targets, and those are al-nusra, isis and fsa confirmed objectives, not residential areas like those bombed by the israelis in Gaza 2014.

And Saudi Arabia/Qatar receive their ORDERS from Washington D.C.

Saudi Arabia and Qatar , give orders to Washington . Leveling them would free America of Obama and Clinton’s treason . The Senatorial military industrial elite would be out their “best” customer. There must be an other way .

who in turn take theirs from Tel Aviv

Wonderfull…Trump is in and the baseball bat with a rusty nail in it gets put to good use.I am so happy.No mercy.You had your chance.ITS OVER.Splattered KEBAB all over the place.

…like Trump said “Bomb the shit out of them!”