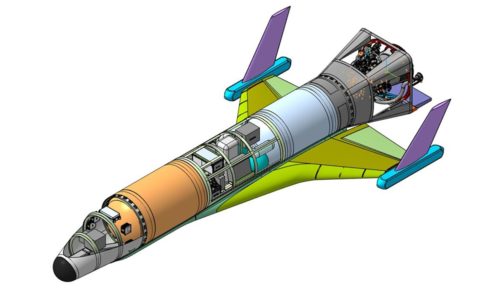 On February 4th, Russian news agency RIA Novoosti published concept images of the first ever Russian hypersonic space drone. The Russian reusable aircraft is a single-engine drone designed for flying in the atmosphere and outside of it at hypersonic speeds.

It is the prototype of a promising reusable aircraft, developed by the International Scientific Optical Network (ISON) for Roscosmos.

The following image shows a schematic of the drone’s launch into orbit and its return to the ground by way of parachutes. 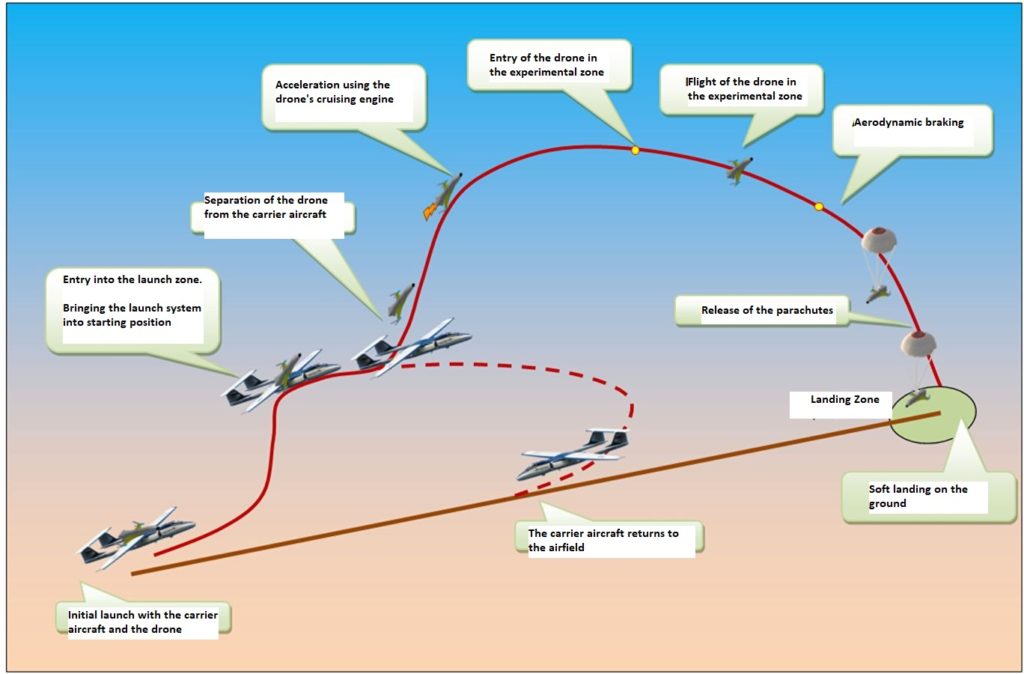 As reported by the Skolkovo Foundation, the device will be equipped with its own engine for acceleration, and at the initial stage of the flight the carrier aircraft will be used, making the drone reusable.

It is assumed that the drone will be able to fly at altitudes of up to 160 kilometers at a speed of Mach 7 or take spacecraft into an orbit to an altitude of up to 500 kilometers. Each such device is designed for at least 50 flights.

RIA cited the general director of ISON, Yuri Bakhvalov who said that only Russian components will be used to manufacture the drone. The engine will be an upper class Briz-M – 14D30.

According to him, five test flights are planned in 2023. In these scenarios, the aircraft will not be used to carry out any strikes. Bakhvalov added that the drone could potentially be exported.

The project has received 25 million rubles in investment from the Project Technika Corporation, as well as 30 million rubles from the Skolkovo Foundation in the form of a grant.

The cost of the second stage of development is estimated to be 280 million rubles. It is assumed that a part of these funds will come from co-investors, and the other from Skolkovo.

In February 2018, the National Interest reported of Russia’s future MiG-41 fighter jet, which would also be able to fly at hypersonic speeds and in space.

This goes beyond what one uses to call a drone. As defined it looks like a dual use launch system of either a payload into low to medium orbit or possibly into a fractional orbit down into a glide path to a target.

They call it “space drone” only because pilotless and because there are no new names that would define different types of pilotless aircraft’s, spacecrafts….

Strange info, not sure what to read from it.

The engine, Briz-M is an engine used to insert large payloads into high orbit (up to geosynchronous, about 36,000 km), it’s a very good engine and can be restarted numerous times (rocket engines have very limited number of starts and restarts in each mission, and also most of them can’t be accelerated under %30 of it’s total power) which allows very precise maneuvers, but it’s an awful engine to be used in atmosphere. It’s also a bi-propellant engine (fuel+oxidizer) and this system is in stark contrast of using an atmospheric launch platform for a “drone”.

Chances are, there’s another engine, possibly a ramjet (very economic in terms of fuel mass because it doesn’t need oxidizer, but needs to be given an initial velocity high enough to start it) that will propel the drone as high as it can breath, up to the edge of space and then Briz-M will be activated. Russia has decades of experience in working with ramjet missiles, from very old air to surface missiles (lick-started by SRBs) to the new ones.

Not to forget that Russia is almost the only country on earth which successfully launched a small satellite from an airplane (Mig-31) into LEO. Although the orbit was very close to atmosphere and the payload small, no other country currently has the means to do it. No doubt the experience gathered by this will greatly help for an air-launched space drone.

Still not sure what would be it’s application, because Russia is a party to the “Outer Space Treaty” which bans military use of space.

That was before americans decided to militarize space and create their space troopers after the fashion of the synonymous holywood movie, to fight the ant aliens.

On a serious note it seems what ever is agreed in the past no longer can be practically applied as advance technological countries as russia and china are will not allow ever again west to have the top hand on anything that can threaten their national security and well being.

base on what the globalist are attempting to do old treaties dont matter or are valid any more even if some still say they are, for political reasons and global consumption of the naive people.

Some interesting extracts copied and pasted from another source (link at bottom):

Many so called ‘experts’ seem to have forgotten about the nuclear air-defence missiles of the ‘First Cold War’. These first generation (nuclear ‘air-burst’) anti-balistic-missile (ABM) weapons were widely employed (and deployed) by both NATO and the Soviet Union during the ‘First Cold War’…………..

……………’Nuclear Anti-Aircraft Missiles’ and thier launch systems are very well documented, with much unclassified information being freely available on the net……………………

…………………One application of these weapons in addition to thier main ABM role, was the destruction / disruption of low orbit satellites. Another function was to deny airspace to enemy bomber / fighter formations believed to be carrying nuclear weapons (a single nuclear airburst could destroy an entire squadron)…………………

………………….When it comes to the resurrection of these nuclear anti-aircraft missiles (and their actual deployment in Europe once again by NATO in 2016, and now Russia in 2018), I have also noted that very few so called ‘experts’ have any idea about this, or are simply unable to comprehend the nuclear capabilities of both the US Patriot Missile System and the Russian S300/S400 system (and some other platforms too)……………………….

………………..The US is currently in the process of converting various limited yield nuclear warheads (aka ‘tactical nukes’) to allow them to be deployed by any NATO Fighter-Bomber, and even by drone. This is part of the reason for the US withdrawl from various agreements and treaties………………..

……………….The US, back in the 1960’s worked out that a combined missile launch with swarms of nuclear armed bomber planes would overwhelm any existing conventional air defence system. This tactic, now refined and even more likely to be used by the US, is why we see the slow return to the nuclear sky denial / anti-aircraft missile systems now deployed in Europe…………………

………Sadly, the basics of surface based air defence platforms and ‘First Cold War’ nuclear airpsace denial tactics and strategies are not understood by the majority of ‘experts’, and there are few modern articles worth reading on this subject……………………………

………………some of the new hypersonic vehicles are specifically intended to take out entire waves / swarms of missiles and aircraft by nuclear explosion in the same way early generation nuclear anti-aircraft missiles were. However, the more sphisticated types with longer endurance and altitude have other applications, such as TARGETING and COMMUNICATION (especially in satellite denied locations)………………

……………….Nuclear anti-air and airspace denial systems are currently (covertly) in service with both the US and Russia, and are expected to enter service with Chinese (and possibly Israeli and Iran too) soon……………….

……………..When we see the deployment of a US Patriot system or a Russian S300/S400 system, we should always consider thier nuclear potential.

Exactly. It would be cheap knock-off of X-37B (a glorified Dyna-Soar) if Russians shoved an Atlas V or Falcon 9 into it’s arse and encased it in a shroud,