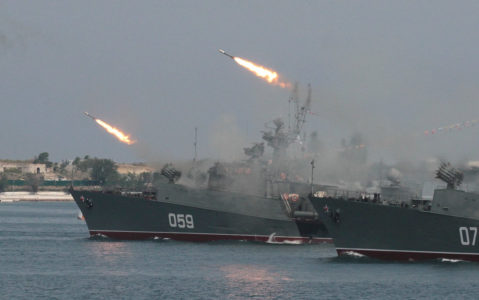 Russian President Vladimir Putin on Sunday signed a new naval doctrine for Russia that names the US as Moscow’s main rival on the seas. He signed the doctrine ahead of a speech commemorating Russia’s Navy Day in St. Petersburg, Russia’s port city on the Baltic Sea.

The 55-page doctrine says that the major threat facing Russia on the world’s oceans is “the US strategic course towards dominance in the world ocean and its global influence on international processes, including those related to the use of transportation lanes and energy resources of the world ocean.”

According to Russia’s Tass news agency, the doctrine also identifies the expansion of NATO’s military infrastructure up to Russia’s borders and the alliance’s drills in waters near Russia as major security threats.

Tensions between NATO and Russia in the Black Sea came to a head back in June 2021 when the UK sailed a warship about 12 nautical miles off the coast of Crimea. Russia viewed the move as a major provocation and said it fired warning shots at the British warship HMS Defender.

Putin’s new doctrine also called for Russia to expand its military presence in the Arctic, an area where the US Navy has said it needs to confront Moscow. Russia is a major Arctic power and its coastline with the Arctic Sea and other waters above the Arctic Circle stretches about 15,000 miles.

The stupid beggar loser hated Americunts have turned the whole free world into their enemies who will give them LGBTlowIQ faggots an enema…SLAVA ROSSIYA!

Crimericans are the most genocidal nation in the world!

Moscow knew who’s its worse enemy decades ago but hesitated to openly name it, until the Russians built the confidence and trust over their military superiority capable of subduing US-led NATO forces in the worst case scenario.

ohhhh no nato or terrorist or nazi ProstYpute ?? ohhhhhhhhh F then ALL !!!!

USA is going to stomp russia out of existence…heheheh

USA run from afganistam and your anus because of the parazites !!!

40% of US loser military is LGBT and got their diaper asses kicked by Taliban goat herders, so me thinks not.

You will be stomped out of existence and sent back to Israel.

the US and Russia should be allies, not enemies, as an American it makes me sad, because it defies common sense. we need each other. Russia supported us in or revolution and in our civil war. that is little known but true

Agreed-but our military is controlled by Israel.

America is run by Jews, and Jews harbor an anti-Russian grudge. After all, if they’re not allowed to completely dominate, then they want you dead.

What took Russia so Fucking LONG!?…

Russia has incentives to equip third parties with the latest tech capable of sinking US carriers, and give them satellite or radar data to help them to guide these missiles. The best treatment for the US is for its aircraft carriers to be sunk easily by small rebel groups such as the Houthis, that would be the humiliation they deserve as a global empire and convey their ultimate downfall to the world.

Russia and China need to deploy nuclear weapons in Cuba NIcaragua and Venezuela.

Hahaha, everybody is laughing at the russian navy – even Malta with it’s 16 ships would annihilate it ^^

All ships at sea are sitting ducks. As the saying goes, it’s not the big that kill the small, it’s the fast that kill the slow. The Americans know this, and that’s why they hide from real conflict. And once their navy is sunk their empire is over.

Americans know all ships are sitting ducks. Russia learned that with the Moskva. If navies cannot be deployed, the American empire is over. Congratulations to Russia and China.

Britain and France were omitted.

Because they are geopolitically nothing

How could Russia destroy an US Navy ship in the middle of the ocean, with no large surface ships, no submarines, and no strategic bombers deployed in the area?