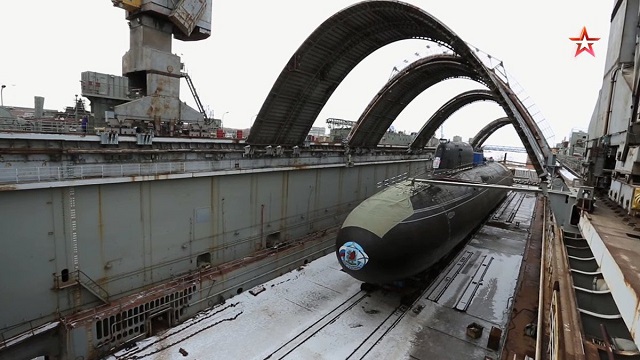 Russia plans to simultaneously lay six warships and submarines in various shipyards at the end of April, TASS reported, citing an unnamed source.

“On April 28, two universal landing ships at the Zaliv plant in Crimea, two frigates of project 22350 at the Severnaya Verf in St. Petersburg and two project 855M multipurpose submarines at Sevmash in Severodvinsk should be laid,” the source said.

He noted that “the construction of the combat fleet continues as planned, despite the epidemic of coronavirus and the reduction of work shifts in many enterprises.”

The source specified that “April 28 is the date for which this is all planned, it can be postponed for a day or two.”

Severnaya Verf and Sevmash (members of the United Shipbuilding Corporation, USC) did not comment on the information.

The press service of the Zaliv plant, in turn, noted that at the moment they did not have any official data on the laying date of the two universal landing ships.

As the head of USC Aleksey Rakhmanov reported to Russian President Vladimir Putin on April 9th, after the announcement of the anti-COVID-19 measures in Russia, only 32% to 55% of workers went to work at the USC enterprises due to the coronavirus.

According to the head of the corporation, from this week the number of personnel involved will be increased to 56-62%. Rakhmanov added that USC is in compliance with all the rules and regulations introduced in connection with quarantine.

At Sevmash, the largest USC nuclear-submarine-building enterprise, it was reported that it had resumed normal operation on April 20th, only employees over 65 remained at home. Personnel are given masks, employees’ temperature is measured at the entrances, a distance of one and a half meters between people is observed.

Russian navy is going through the biggest revamp since Peter the Great. This will make Russia a naval superpower too with agile and fast attack ships unlike the Americunt coronavirus infested rust bucked carriers with dying lardass cunts inside.

so in the next month contracts for 2 nuclear powered submarines, 2 helicopter carriers, 2 Project 22350 frigates, and a contract for Leader icebreaker with a displacement of 71,400 tons, not bad.

AM Hants
Reply to  Kamīrusan

They have been rolling one nuclear ballistic off the con eyor belt, since 2014.

How many new electro-diesel subs? PLUS the Yassen classes, again being turned out, this decade.

Not forgetting those little grey corvette, which pack a punch.

What has the US produced this century that has managed to achieve active status?

Must admit Russia is seriously impressive, cost effective and freehold included, when compared to US defence weapons and systems.

How little you know.

Which one is better?

That wins. In this case Russia won.

‘Yes’ , ‘indeed’ accompanied by an oposite statement, is the argument of a lazy troll that started to realize he’s the only one not geting paid.

+25Shekels… Dont spend it all at once…

Indeed. Capitalism made Russia poor, so they had to scrap a lot of their navy in the 90s and they also stoped some promising research and developement du to the capitalist poverty. The same fate now awaits for US.

So before 90’s Russia there was capitalism in Russia?

Nope. But before 1991 Soviet Russia was not poor as was early capitalist Russia in 1990. USSR was second in the world by GDP and comparable to Italy or Portugal in GDP per person. Only imperial countires exploiting colonies were ahead of USSR even though USSR was massively supporting other countires economies. Now Russia is capitalist but Putin managed to come out of the worst situation by canceling the most capitalist economic principles and renewing state control of many industries and resources.

Then if it was rich why it colapsed? I’ve seen footages from 90’s, their clothes were garbage btw

USSR collapsed because their elite betreayed the idea of a just society.

And when did that happened? What year it was when this betrayel happened?

Damn.. the most part of communism was pure betrayal of the people

Entire history of capitalism is pur betrayal of the people.

they pretend to be democratic, while in reality is an oligarchy.

Still a lot better than the communist oligarchy

i livet in communist and capitalist country, so i can compare with my own experience, unlike you hollywood boy. Communism was much better.

In which communist country was better than in hollywood?

AM Hants
Reply to  Azriel Herskowitz

Why? They are a land based military and owing to the nation covering 11 time zones, has no need for a sitting duck aircraft carrier.

She has an aircraft warhorse, plus little grey corvette, which can hit a target 1,000 miles away. They have 5 classes of submarines and over 60 in a tive service. Many brand new, in a range of classes. In comparison the US only have 2 classes of submarine. Aged ballistics, due to be replaced in the latter part of the next decade, but, no doubt, that will mean, 2 decades time. Knowing US defence delays. US attack submarines, are just lowly being replaced.

Russia has signed the convention of the sea, unlike the US. Which is now why the US are desperate to take control of Greenland and Iceland. All those natural resources the US is missing out on. How many ice breakers or floating near power plants does the US have? How many does Russia have?

Why do you assume Russia intends to be a ‘naval superpower’? And remind me again what role a nuclear powered carrier would play in the Russian navy?

Defend their commercial assets like oil pipelines? Most of Russia’s trade routes are over land and their few underwater pipelines run through littoral waters.

Submarines and armed icebreakers I can understand given Russia’s arctic coastlines but carriers above the arctic circle doesn’t really make much sense.

To have a carrier also means you have to build a fleet to defend it. What maritime assets does Russia have to justify such a cost …. other than a pissing contest to please trolls and fanboys that is.

u r an idiot—expected…carriars r useless….Russian can destroy all US carriers in 3 days—according to US military experts

Aircraft carriers are obsolete since the end of WWII. They are only good to terrorise third world countries. If they were any good Israeli Navy would build one. Guess what, they are investing instead of stealth subs and fast guided missile cruisers.

As if Russia wanted to fall into the trap of global empire. This didn’t work out well for any nation that has ever tried it.

Being able to defend their borders and limited power projection is well enough.

But have Americans genetically similarities with the Iranians or Italians, or how do you explain it?

Pretty ambitious but ill wait for them to actually lay them down (LHD), at least they’re providing workers with masks and sanitizers unlike the US, the Lider Nuclear powered Destroyer/Cruiser and Project 22350M are frozen or waiting a final decision from the MOD, China just launched 2 LHD’s has a carrier in construction a navy with 6 carriers isn’t far off for the PLAN

Russia will never prioritize their navy compared to thier land and air forces unless it’s a submarine …much like the USSR which did so in the end, for their future in the arctic/Northen sea route this is a big step for the navy.

They also need new tug boats for their criuisers

Diesel tugs for the nuclear cruisers

Indeed, Nimitz is getting old.

And they still lost the war…

AM Hants
Reply to  Kamīrusan

Grey corvette. Mistral aircraft carriers, which France refused to deliver. Russia focuses on her land based forces, owing to the size and strength of the nation. They have a large navy, not quite as large as the US, but, large enough to handle ocean defence.

Most excellent Comrades ;) Hasbarats are already crying and raging :) Wehehe.