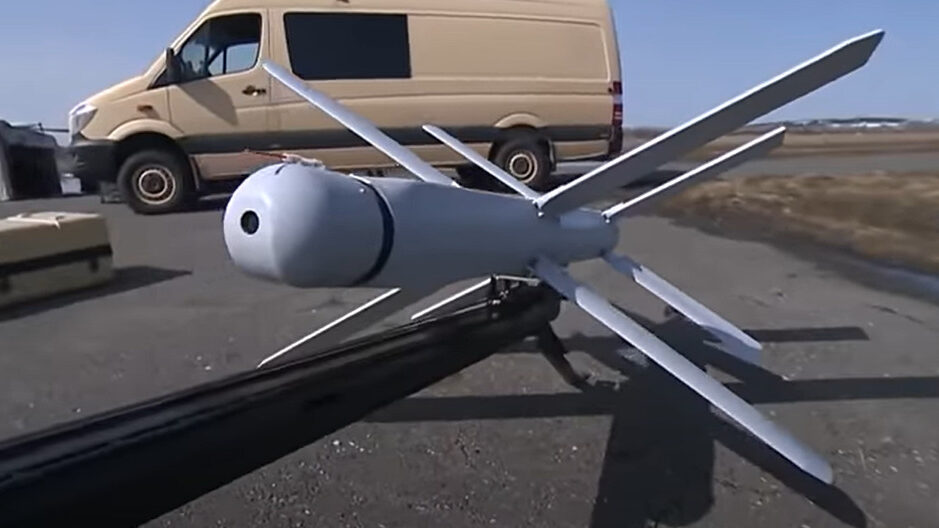 A Ukrainian-made Gyurza-M-class gunboat of the Ukrainian Navy was also damaged as a result of a strikes with a Lancet loitering munition.

The Lancet loitering munition was developed by the ZALA Aero Group, a subsidiary of Russia’s defense giant JSC Kalashnikov Concern.

The recent strikes were all apparently carried out with an improves version of the Lancet-3 that features a more aerodynamic design with extended X-shaped wings. This version has an endurance of an hour and is armed with a warhead weighting five kilograms.

The loitering munition is equipped with an elector-optical system that allows it to detect, track and lock on static and moving targets.

One of the main feature of the Lancet is its small radar cross-section and minimal infrared signature which make it nearly impossible to detect and intercept.

The Russian military has been using the Lancet and other types of loitering munitions against the AFU since the start of its special operation in Ukraine with much success. In the last few weeks, the use of these munitions was significantly expanded.

Please, comrade Putin, show to those who support the Ukronazis how wrong they are!

I will wear my “Z” and “ONCE WE PUTIN, WE NEVER PULL OUT” shirts forever if Russia wins this time.

hash
hashed
Last edited 2 months ago by USA is a shithole, EU is becoming one
40
Reply

Carlo
Reply to  USA is a shithole, EU is becoming one

USA is a shithole, EU is becoming one
Reply to  Carlo

This lady is worth dying for. 💝

Florian Geyer
Reply to  USA is a shithole, EU is becoming one

jens holm
Reply to  USA is a shithole, EU is becoming one

Its cheeper to be tatooed.

Keep your shirt on
Reply to  USA is a shithole, EU is becoming one

They won in Chechnya. They won in Syria. Why wouldn’t they win in Ukraine?

The Kiev fascists terrorized the citizens of the Donbass for 8 years straight. Now Russia is giving Kiev a taste of their own medicine. Every time they hear the lawn mower motor flying over their heads they know they better run away. The only difference between Kiev’s terror as opposed to the people of the Donbass is that over 14,000 civilians were targeted and killed by Zelensky, Poroshenko and the rest of the Kiev junta. Russia has not targeted civilians because unlike the NATO trained army, Russia has pin point accuracy and is extremely considerate towards civilians. Its obvious why the continents of South America, the Middle East, Asia and Africa all stand on principle with Russia. The world is watching.

Right now they are DNA checking all the Ixiums stil alive and compare with more then 500 graved to ID the dead ones.

The ones still alive has told who did it. It was not nazis.

So, you admit Ukrainians are nazis even if you lie that they don’t commit war crimes.

The Ka-boom of M109 is really one of the best ones.

The first video is old. No way there are trees with green leaves in november in southern or eastern Ukraine.

The last video, the lancet misses the radar. It hits next to it.

The rest of the strikes are very precise and powerful.

Antenna stops rotating that proves it a success

Those are russias last days before being torn apart into colonies. Dosvedanye katsaps

Darius
Reply to  Putin is a rape victim.

“Those are russias last days before being torn apart into colonies. Dosvedanye katsaps”

Here is an example of what are the dreams and deep wet wishes of the russophobic part of the so called Western Civilisation. This is honest and straight , thank you really for your message. I know some people which live in this hysteria amid the growing economic problems in western countries. “Just some few days , Russia will be conquered , we will gain huge rich territories in the whole Eastern Eurasia , and it will compensate all the shit we are now going through”

Another fantasy and dreams , the people obsess about , is to kill Putin , somehow , if only in dreams and worshipping. Maybe some katholic exorcism or voodoo cult , please please somebody kill Putin. And everything will be rich and fine and ok like before , in our Golden West.

We will meet more of this ill thinking and feeling in the coming years. The last years of our glorious great West. Like deeply disturbed megalomaniac person , which must realise and learn , there are many other people and nations on our planet , and we are nothing special , just ordinary normal members of the world community. A very frustrating and painful process. And a big problem and task to solve , if we want to survive in our Golden West.

Its no hysteria having USSR all the way to west of DDR.

It goes for Caucasus and east of there too.

This is no USA Empire but hard facts. We dont want that back.

For ourself even the Tzars had the Baltic sea as open for everybody and mixted populatios along it. It wasnt always happiness and understanding but it mainly was.

jens holm
Reply to  Putin is a rape victim.

Very optimistic. Hard to see the next step for their declining. Thye might love fishing in the artics. They already lives in the dark with so many things.

Dark indeed. They ride around on brown bears and not on rainbow unicorns like you guys..

LOL
Reply to  Putin is a rape victim.

Puitin is an alpha male. Scares the bejeezus out of you, I know…… but you’ll get over it.

Patriotic music from which country?

Don Cossacks singing or what.

Why not heavy metal? It was a Western invention and the Russians are only taking it to its intended conclusion. Makes the blood boil and the war go faster.

It works for me. Tryu aian in left corner bottom. No sound at 2 of them.

Its doing well here. You might use bottom left corner better. It can be repaired. I have just arrived.

Biden has AIDS in his mouth
Reply to  Damien C

Good by me…maybe they US..United Snakes or their shitbuckets are blocking them in your area

Its not like that here. Its videoclips and 2 with no sound.

Try to use VPN, restart your computer/telephone, check your ad-blocker, video codecs, browser’s cache. No troubles with videos, works fine.

Biden has AIDS in his mouth

jens holm
Reply to  Biden has AIDS in his mouth

less then 100.000 jews lives there. Thye are only terrorrists in Russia. Thats strange.

Maybee the Ukrasshould have loitering ammo for artillery too and send a “How does it feel”.

Its the answer to agent orange in Vietnam. Russian cant find Ukrainians fdiding in the forrest with their second class artillery and primitive drones.

They had it, with switchblades and the like already, but they turned out to be useless crap. Try to stay up with the war, Sherlock.

Anyway, they’ve had enough with ‘how does it feel?’, after the Donbass militias reminded them so many times..

Need bigger drones to hunt down armored units behind front lines at 40-50 km. Small ones are good, but not so effective with 2-3 kg of explosives onboard. Something like “Harpey” family is needed. Or combination of reconnaissance UAV as re-translator of signal for loitering munitions, this is cheaper variant, because you don’t waste expensive guidance system at strike. I’ve read that “Geranium” family can be equipped with guidance system (like “Harpey”) to search and engage mobile targets. Need something with quiet electric engine or to use pack of “flowers”, say 10-20 units with 2-3 with active guidance to control other units and to have stable control even if 1-2 control units lost.