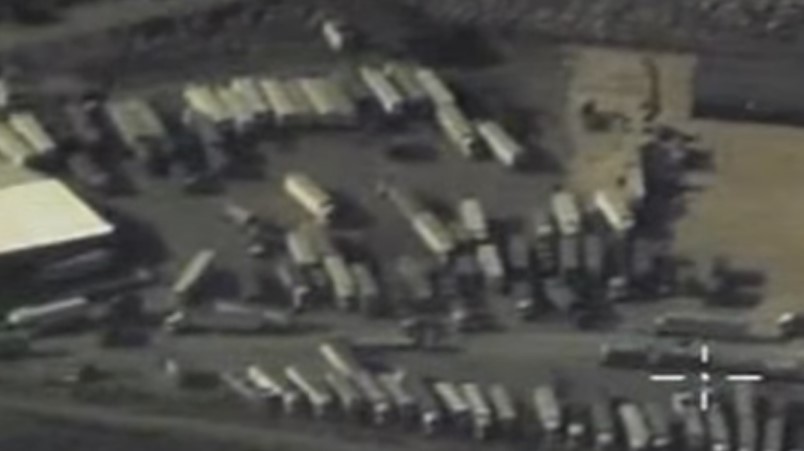 Screenshot from the Russian MoD’s video

The General Staff of Russia’s armed forces has released video of about 12,000 tankers and trucks on the Turkish-Iraqi border.

“The [aerial] imagery was made in the vicinity of Zakho (a city in Iraqi Kurdistan), there were 11,775 tankers and trucks on both sides of the Turkish-Iraqi border,” Lieutenant-General Sergey Rudskoy told on Friday.

“It must be noted that oil from both Iraq and Syria come through this [Zakho] checkpoint,” General Rudskoy said.

The number of tankers on the northern and western routes used for transporting oil from Syria is declining, the general added.

“According to satellite data, the number of oil tankers moving through the ‘northern route’ towards the refinery in the [Turkish] city of Batman has considerably diminished,” Rudskoy said.

According to Rudskoy,  the number of tankers using the ‘western route,’ between the Turkish cities of Reyhanli (at the border with Syria) and the city of Iskenderun, has decreased to 265 vehicles.

This became possible due to the Russian Spacedefense Forces’ activity aimed on destroying tankers used by terrorits for oil transportation and terrorist-controlled oil facilities.

Surely, it would be simpler for the Russian Air Force to destroy sections of the road as opposed to destroying tankers? If a section at the head and the rear of a tanker convoy is destroyed, the road beomes impassable; then those tankers become unusable; they are isolated and cannot escape or move to an alternative route. Presumbly, this would also be less costly in terms of arms utilised.

Does not take very long to fill in a hole with a couple of dozers.

This huge business didn’t happen overnight, but has developed over the past dozen or more years as the Kurdish north in the days of Saddam had a defacto southern border that held Saddam for the most part out of the area and allowed the Kurds to develop this business with/via Turkey. Recent realities on the ground likely expanded the existing business using existing infrastructures. and will likely continue even if stolen Syrian oil is excluded. Technically even the Kurdish business is illicit as theoretically Kurdish Iraq is part of Iraq, but ? What a bunch of confused politics.