On September 23, Russian Geran-2 UAVs hit several targets in the city of Odessa. Ukrainian forces attempted to intercept drones with small arms, but failed. The Ukrainian military aircraft were also reportedly deployed to hunt for the UAVs but in vain.

In the afternoon, citizens of Odessa shared numerous videos showing Russian UAVs hitting Ukrainian military facilities in the city. The eyewitnesses reported that the air alarm was not turned on in the city.

At least one of the kamikaze UAVs struck Ukrainian facilities near the city port. Judging by the video, the drone hit a building on Primorskaya Street, 34 in the area of the city port. Units of the 35th and 36th brigades of the AFU Marines are reportedly located in this area. Local sources report that several ambulances arrived in the hit area.

Explosions were also reported in other districts of Odessa. 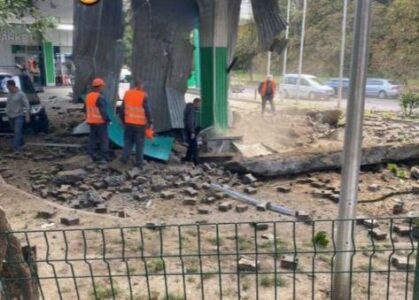 Ukrainian sources reported that one of the targets of the attack was a gas station in one of the Odessa districts. However, the reports were later refuted. The incident was caused by a damaged gas cylinder.

The Shahed-136 has a range of more than 2,500 kilometers and can be armed with a warhead weighting around 50 kilograms. The drone is guided by a satellite-aided inertial navigation system. According to The Wall Street Journal report, the drone has high resistance to jamming.

The introduction of longer-range suicide drones similar to the Shahed-136 makes the situation worse for Ukrainian forces. Just in the last few days, Geranium-2s were used against the Ukrainian military objects in Ochakov and Krivoy Rog, as evidenced by the Ukrainian side. They have also destroyed foreign artillery systems in the Kharkov region.

KABOOOOOM! More HIMARS just went up in the air. Now that mobilization is in full swing, don’t be a surprised to see Odessa under Rusian control and holding a referendum to rejoing the Russian Motherland some time in the next spring.

I didn’t see any himars in the air, only apartments and what seems to be a gas station, Russia never tires of being ashamed. More civilians killed by Russia’s war machine, congratulations to the Russian dictator.

I want to see Ukraine become a landlocked country. NATO Jews can hide out in Lvov while Russians enjoy the beach.

Rumor has it that Zitlensky was seem in line in the Kherson region trying to obtain a Russian passport. Joe Biden was next to him holding his hand.

LOL!!! well he already has a American and Israeli ones.

No, Biden was holding his piano playing member not in his hand tho.

in amerikunt matriarchy we very upset immoral failures….game over for you losers

Do you think those kind of building attacks really do anything in the grand scheme of things?

Who was in the building?

It depends who is in them and the Ukies have placed a large garrison in Odessa.

Onwards to Odessa and then Kiev, all of NAZI UKRAINE must now be freed and annexed back into Russia NEVER AGAIN SHALL THE USA OR THE WEST EVER GAIN A FOOTHOLD =Z=

Where is Russian drones. Shoigu is an idiot