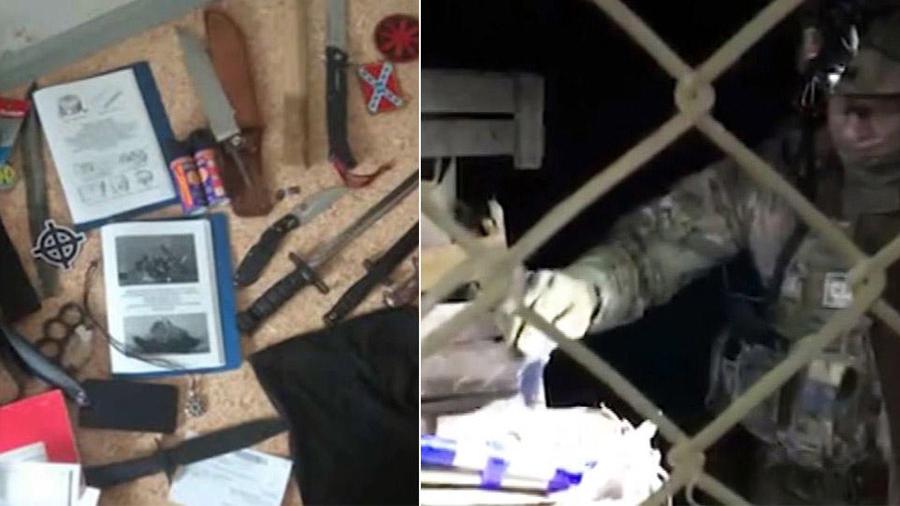 On September 4th, Russia’s security service – FSB, announced that it had arrested 13 Russian citizens on suspicion of preparing attacks on educational institutions and crowded places in different regions of the country.

According to agency, most of the detainees belonged to a closed Internet community.

They prepared massacres using improvised explosive devices, incendiary mixtures and melee weapons. In addition, the suspects tried to attract other Internet users to take part in the attacks.

Personal diaries and communication devices were seized from the detainees, which contained instructions on how to make explosive devices, schemes of attacks on educational institutions and law enforcement buildings.

One of those arrested by FSB officers on suspicion of preparing massacres announced plans to stage a terrorist attack in a Russian school on September 1st.

The video recording of his correspondence with the confession, distributed by the FSB Public Relations Center and reported by TASS.

It is noted that the footage shows the messages of the detainee to an unknown person. “I want to make a terrorist attack at school. I’ll go to school. (…) I want to kill 100,” he told the person.

It is noted that this relates 15-year-old resident of the Minusinsky district of the Krasnoyarsk Territory.

A source familiar with the situation reported that the detainees were participating in one of the closed forums where teenagers discussed the Columbine School massacre on April 20, 1999 in the US state of Colorado.

It turns out that all four ready-to-use improvised explosive devices discovered and seized by the FSB were made by one of the members of the “criminal community.”

The remaining 12 teenagers, according to the channel, are not yet suspects or accused in the investigation materials.

“Some of the adolescents are still at large, others after the incident will be watched by psychiatrists for some time,” an unknown source told Russian media.

This is EVIL influence from the US school mass killings. Russia had always certain infatuation with the US specially among naive and stupid youngsters and fucked up liberals who like to copy anything coming from the West and specially US.

Same as “Blue whale” suicide groups in internet, mostly with kids involved. Started in northern Europe as I know. Moderators of russian segment were foreigners (ukros and other russophones from Eastern Europe). This is not just copying, it’s destructive job of psychological warfare.

I didn’t know that Obviously there is psi ops war against Russia going full strength specially obvious with this ridiculous “poisoning” of Navalny. Just shows us how desperate and determined they are, to use everything and anything against Russia !

Hohols (ukros) are well known terrorists. They don’t dare to attack russian army in Crimea, but sending their terrorists and making numerous phone calls with false alarms about planted bombs (here it’s called as phone terrorism). Last attack from their side is blocking several internet news channels with hundreds of thousands subscribers. I thought it was “Youtube” censorship (which really exist and getting wider), but later one of such channels was unblocked. Owner of the channel said that it was the job of ukrobots (supported by Poroshenko when he was leader of the regime) and YT is ignoring many of their reports. We all know who stands behind Kiev regime.

I am so fed up with blind hatred of those neo-Nazi Ukro lunatics and passivity of Russia that I am starting to hate all this subjects on Ukraine. Because it is always the similar ridiculous situations were those lunatics do anything… to try to do at least some harm to Russians or Russia while they receive the same no answer – ignoring from Russia….

Who are these liitle bastards? Daesh?

The youngster that have created 1st incident of that kind on Crimea. He had house-made bombs and was using also licensed shotgun. And he was ethnic Russian I think. So no this has nothing to do with classical terrorism (none of Daesh members would ever have confederate flag ( on photo ) but Al Qaeda or ISIS flag) These are just kinds under negative influence of American movies and school mass killings in US, that they see in naive way as some romantic act of “vengeance”. Against school professors, schoolmates and similar.

the difference is dramatic; Russian authorities prevent this; amerikan authorities encourage it—merely increasing the peasants fear and justifying their police nanny state….can amerikans be this incompetent?

Confederate flag?:))) Did they just chip in random stuff to take a photo? People change the tactics stay the same

And what did you expect to see really?

It’s Russian kids imitating US kids. That’s all. Level of the stupidity behind these acts stays the same.

i expected something more serious to preoccupy people’s minds

The problem is hollywood films and its dark, death culture worldview is seeping into the psyche of the Russian youth. Wherever that decadent US pop culture is taken up by the youth there will follow school shootings, drug culture, dissemination of pornography among the youth, mass drug over dose, depression, and violent behavior which imitates hollywoodized american death culture video games.

I agree. Rubbish consumerist self indulging out of any values would be “culture” or should we better call it “anti-culture”. Because that is what it really is. Cultural desert and collective mental and moral idiocy of the highest rank. They are producing society of idiots dangerous for themselves and for the others!

Well-said! The big problem is that most of the World’s youths are copying US death culture and its dark practices thinking that it is progress!

What ethnicity and religon were these ” misguided ” youth from ?

Yet a new example of breach of childrens right to expression. These teenagers were 10-11 years old and should not be in Gulag for demanding a little freedom and democracy in Russia.