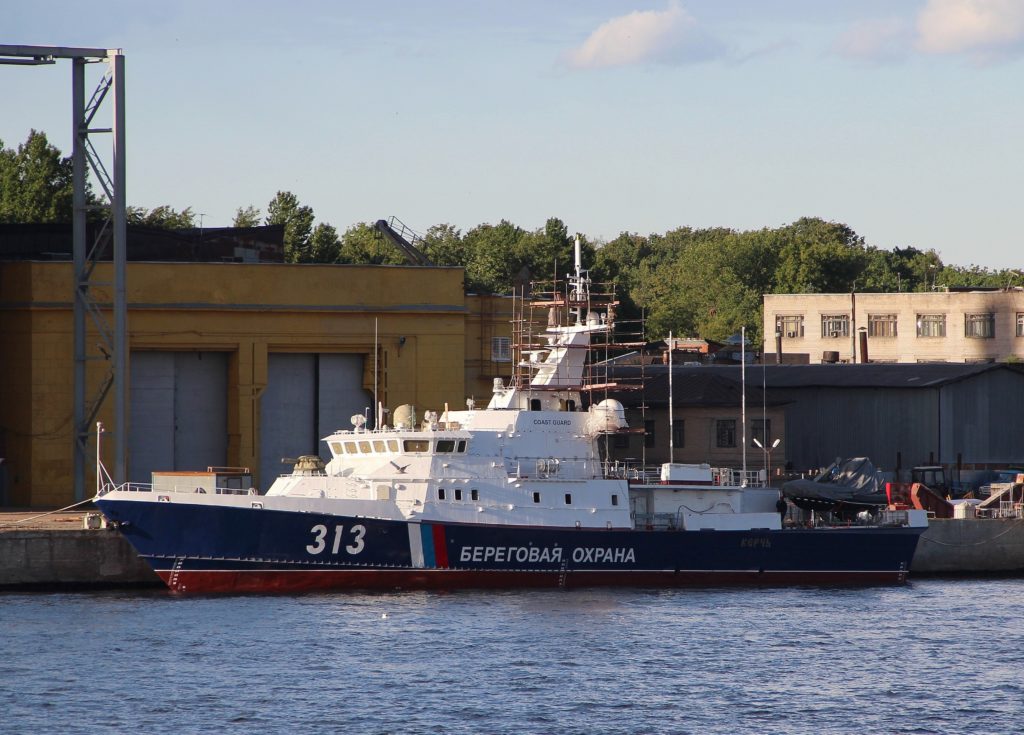 Another Svetljak-class (Project 10410) patrol boat, Kerch, was put afloat by Russia’s Almaz Shipbuilding Company on June 8, Korabel.ru reports. The patrol boat will be delivered to the Coast Guard of the Border Service of the Federal Security Service (FSB) by the end of 2018.

The Almaz Shipbuilding Company and the FSB signed a contract on building a Project 10410 patrol boat in 2016. The Kerch patrol boat’s keel-laying ceremony took place on May 24, 2017.

Project 10410 patrol boats manufactured by the Almaz Shipbuilding Company are armed with:

According to the Almaz Shipbuilding Company, the Kerch was the third patrol ships, which was put afloat in June. The previous two were a Rubin-class patrol boat (Project 22460) and a Purga-class icebreaker patrol ship (Project 22120). They are also set to be delivered to the Coast Guard by the end of 2018.

In 2016, the FSB’s Coast Guard ordered construction of 3 more Project 10410 patrol boats: one from the Yaroslavsky shipbuilding plant and two others from the AO Vostochnaya Verf (Eastern Shipyard).

The Coast Guard is actively boosting its capabilities amid the opening of the Kerch Strait Bridge (May 16) and continued tensions with Ukraine in the Sea of Azov.

The Russian-Ukrainian standoff in the Sea of Azov started on March 25 when it became widely known that the Ukrainian Coastal Guard had illegally seized the Nord fishing vessel flying the flag of the Russian Federation in the territorial waters of Russia. The Ukrainian side rejected attempts to solve the issue via diplomatic channels. So, the Russian Coast Guard expanded its presence and security operations in the region, including operations against illegal fishing by Ukrainian vessels and checks of ships heading to Ukrainian ports.

Another essential issue is the security of the Kerch Strait Bridge. Mainstream journalists and some Ukrainian radical public figures have called on the Ukrainian military to bomb this strategic facility linking the Republic of Crimea with Russian mainland. Even if the Ukrainian military is not ready to take such a risk, there are enough radical pro-Kiev militant groups in Ukraine to make an attempt to carry out terrorist attacks on the bridge.

REMINDER: In November 2015, the entire Republic of Crimea left without power after a Ukrainian government-linked radical group known as the Mejlis of the Crimean Tatar People blew up transmission towers of the line to Crimea in the southern Ukrainian region of Kherson.

The ukranians will get what they asking for at the end.

I don’t think they be this much gone in their minds to send air force against Crimea, but will try and send terrorist against them or as they call them radicals. Either way I hope Russians respond, in kind and not try and solve this politically. Ukrainians, are controlled morons.

Yes u r right its not in Ukraine interest to directly involve in a terror attack, in which is done thats a terror attack, but most likely is that some of the pro-ukraine nazis will try to sabotage the bridge if the Kiev government wants that.

Nobody on the Kiev sides wants to attack the bridge. As easy or it was for the US Coalition to make unsupported claims about chemical attacks in Syria, imagine what Russia would do if something happens to the bridge. It would be considered an attack against Russia proper and all bets would be off. In a few hours, without breaking much of a sweat, Russia could smoke anything of value held by the DoD in Ukraine. It would probably also, if Russia decided to do it, vaporize a bunch of perceived clandestine assets. The CIA would be howling.

To me, the only ones mouthing off about taking out the bridge, are the unconscious folks in the media and a few government mouthpieces, who do not think they will come to harm ( aka punks ). I wish well to all.