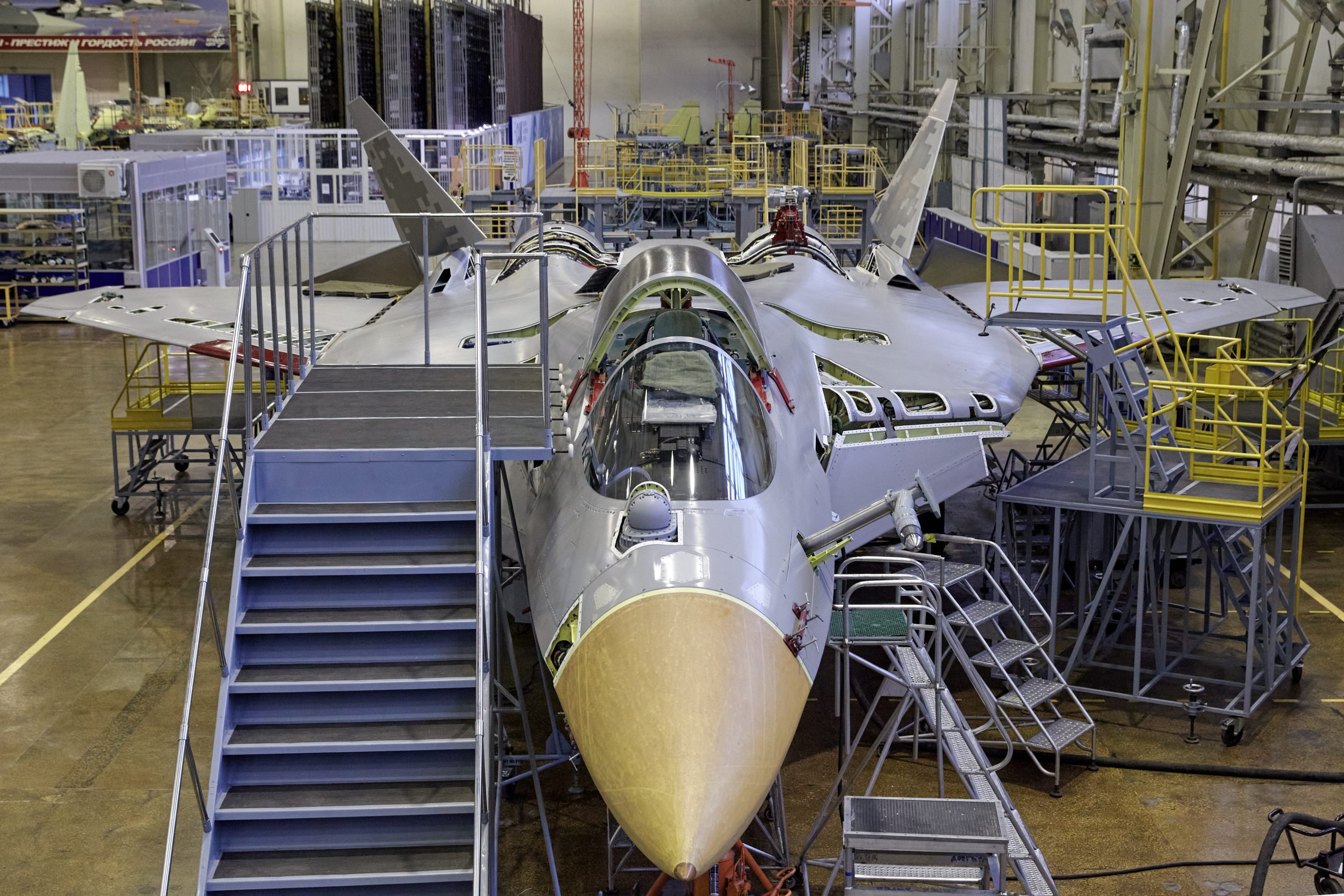 The Amur Aviation Plant is a branch of the Sukhoi Company, which is a subsidiary of Rostec.

“At the Sukhoi plant in Komsomolsk-on-Amur, the modernization and technical re-equipment of production was carried out, which allows us to successfully and timely fulfill the state defense order,” Ilya Tarasenko, General Director of Sukhoi, reported to Defense Minister Sergei Shoigu.

“As part of the State Defense Order, we plan to supply the Ministry of Defense with 76 Su-57 aircraft systems by 2028. Such workload allows us to ensure the dynamic development of the enterprise and decent working conditions for our employees. “

A photograph was published, presumably of the second production sample of the fifth-generation fighter Su-57.

In August 2018, at the International Military-Technical Forum “Army-2018”, the Ministry of Defense of the Russian Federation and Sukhoi signed a contract for the supply to the Armed Forces of the first two serial fifth-generation fighters Su-57.

In June 2019 at the International Military-Technical Forum Army-2019, the Ministry of Defense of the Russian Federation and Sukhoi signed a contract to supply the Armed Forces with a total of 76 fifth-generation Su-57 serial fighters.

The deadline for the execution of the contract is 2027.

The first production aircraft Su-57, built at KnAAZ, made its first flight in Komsomolsk-on-Amur in early December 2019 and was planned to be handed over to the Ministry of Defense on December 27.

Just days before being handed over, on December 24, 2019, at the final stage of factory tests, it crashed in an accident, presumably due to a failure in the aircraft control system.

The loss of the first production model of the Su-57 entailed major personal litigation, including a change in the management Sukhoi.

According to available information, Sukhoi will be forced to compensate for the loss at its own expense by manufacturing another plane to replace the crashed one.

As such the initial deal was for the all 76 of the Su-57 fighter jets to be delivered by 2027, but there appears to be a slight delay, as even Sukhoi officials say it will happen by 2028.

Sukhoi has the best aesthetics of any jet-fighter designer out there today.

I can’t name any other military jet manufacturer that comes close to Sukhoi when it comes to looks. Just beautiful planes really.

Mansouri
Reply to  Blue In Green

New aircraft designs require extensive testing to find and work out the bugs. Aircraft manufacturers always produce several dozen or more to run thru rigorous tests until they’re confident in producing a reliable product to sell to governments. Sukhoi has only produced 10 prototypes since 2010, with one catching fire after landing and now this one losing control while in flight. Russia should expect accidents with prototypes to happen so had no business suing Sukhoi.

the blackjack was an answer of USSR to american B-1.lot of pilots died during development, the 14th variation was the first usable. what yiou see is the 2xth variation. it is 2x bigger then the b-1 and 4x bigger radar foot.

i tell you the b-1, b-52, blackjack and de older russian bomber are bullshits. they have no chancve to deliver bombs enough close to the target, if the opponent is a relatively developed country with normal air defence.

the only bomber which is counted is b-2. and ruskies have nothing similar. they plan for 25 years, but the forst staps will do maybe in 2025. when yanks will have already b-3.

russians have quite good 4th generation planes, but only few pieces. they have cca 300 pieces of modern versions, amerika 2500 and nato 5000. ruskies should have 7000 modern, because they are on two continents, have the largest country and longest border.

You are not counting the modernized versions. Ruskies don’t like to waste money. They spend wisely. Look at the modernized S-125, capable of spotting stealth aircrafts.

Also, I don’t buy into the carrier, stealth jet, bomber bullshit. With drones, AI, hypersonic weapons, the future belongs to missiles and submarines.

Why would they “smoke screen” old SU-27 design modernized to the maximum and called SU-35 with completely new design SU-57?! The new design SU-57 is 5th generation platform for 5+, 5++ future upgrades.

SU-57 is today what SU-27 was long time ago when it has appeared the 1st time. New design that will develop in whole new family of newer modernized jets of this basic new design. The ultimate stage will be Artificial Intelligence pilot-less jet, stealthier , faster, even more agile, with much better radars and by far more powerful hardware and software core system than it is today.

The only good thing about it, is the S-70 Okhotnik.

As time passes, the Su-57 looks more and more like the failed T-14 Armada.

That is simply not the way it has happened. It is not the truth because you lack knowledge on the subject.

SU-27 has become ” the state of the art” buy systematic improvements and very 1st design of SU-27 was even abandoned all together and improved through newer re-design of that 1st design on insistence of air-force (that re-design has persisted to the present day in the SU-27 we all know today) So it was also gradual development of the basic design that has evolved in the “state of the art” model.

Calling T-14 and SU-57 “failed” you try to give impression of an expert instead you just show your ignorance (superficial knowledge) on Russian weaponry.

t-14 is a big fail according to russian army ;)

hahahaha what a joke of jet

Sukhoi needs to start cranking these out en-mass like they do with SU-30/34/35’s. I know it’s still a new aircraft, but they’ve built about a dozen prototypes already so you’d think it should be easy by now.