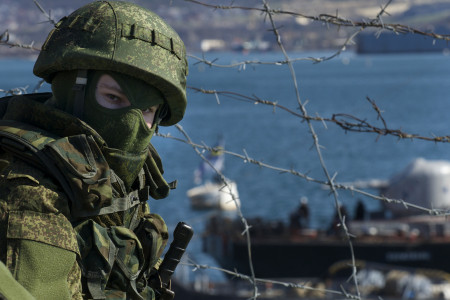 The Russian military are preparing to defend Crimea from the Armed Forces of Ukraine and their NATO allies. The recently shared online satellite imagery revealed that Russian forces are actively reinforcing the military positions in the north of the peninsula.

The footage showed the renewal and digging of new trenches near the Isthmus of Perekop which links the peninsula with and the mainland. The firts photo was reportedly taken on November 5 near the town of Armyansk. An excavator is seen digging new trenches in the area. The second photo was reportedly taken on October 10. It shows Russian trenches on the Chongar peninsula located in the north-eastern part of Crimea. 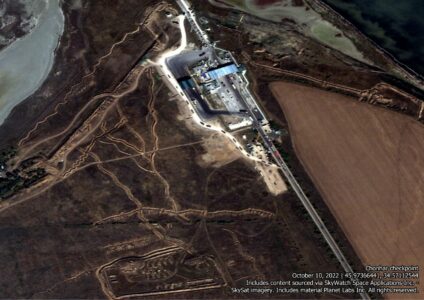 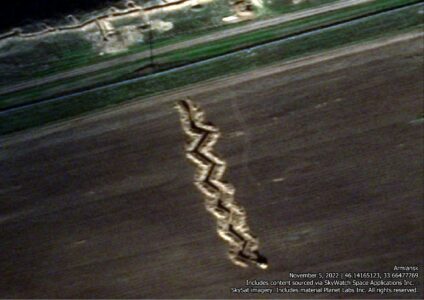 There are two roads  leading to Crimea from the mainland. Border posts were established near Armyansk and Chongar after Crimea entered Russia in 2014. In September 2022, after the Kherson region also entered the Russian Federation, the borders between the two Russian regions were eliminated.

Amid the upcoming retreat of the Russian military from the right bank of the Dnieper River in the Kherson region, the threat of further Ukrainian advance is growing. The northern regions in Crimea may be easily shelled by Ukrainian artillery and foreign advance systems as soon as Ukrainian forces approach the Dhieper.

The battle for Crimea is no more a pipe dream of the Kiev regime.

God bless Russian soldiers, give them strength give them courage, give them the skill and perception to win the day and the war.

USA is a shithole, EU is becoming one
Reply to  Captain Hohol

Give them wise commanders.

Apparently there is none up there, at least not now.

What good is all of that to a soldier who is constantly ordered to retreat and who isn’t given the needed support to carry out the task? Russian soldiers are NOT at fault here, they are already brave and capable but the higher command is not playing it’s hand well if at all.

Vlad the Goat Fucker from Rumania
Reply to  Captain Hohol

The only thing for Americunts will be sodomy attacks on their assholes by niggers.

Bridgeindawater
Reply to  Vlad the Goat Fucker from Rumania

I understand your anger, stemming from Russia losing more and more ground in Ukraine, after having wasted the lifes of at least 25000 russian and DPR etc. troops. Anyway. Indeed, now even the russian soldiers are complaining about the Chechen and Dagestani troops, because they (the Kadyrowski-Chechens) harass them (the russians) and do not see them as true men, but simply as pussies. Proof is here:

Quote: “I want to address Ramzan Ahmatovich Kadyrov, from the [russian] servicemen. Ramzan Ahmatovich, we’re all fighting for the same thing, to cleanse our motherland from the Nazi devils, to liberate our territories. But your people, I’m speaking of those loyal to you, the Chechens, were seen multiple times using violence against our servicemen, LNR and DNR. Obviously, we all have respect for our Chechen brothers, but we have evidence of _multiple sexual assaults_ against our fighters. This is too much, it crosses all the lines. With this background we have a tense situation and conflicts constantly arise which put in jeopardy the execution of the objectives and it brings a high level of mortality in the ranks. Ramzan Ahmatovich, we’re not the Shaitans and shouldn’t be suffering humiliations now. Ramzan Ahmatovich, if you really want to help us in our victory, I ask you to pay attention to this issue and take appropriate measures.”

25.000 dead rus/lpr/dpr an chechen soldiers sounds realistic for me. but how many ukros? 100.000+? and if this goes on, how long can ukropistan keep on bleeding? for sure not as long as russia can. so thats the reason why the kiew triators must be forced to peace talks, before they bleed out they whole country and people for decades.

SFis100%independent
Reply to  Vlad the Goat Fucker from Rumania

shut up, u retarded.

and why is the kiev presidential office still standing?

I wake up everyday and ask the same question

Strange that SF have an issue with comments questioning the wisdom of the Kherson retreat and censor them yet have no issue with scaremongering articles like this one.

If Russia has to dig trenches in Crimea in fear of a military advance by a force with no Navy or no Airforce and less artillary. Then I can only advise that they start digging them in Moscow because if you can’t stop them here on a limited front with multiple bottlenecks with more Tanks Aircraft Missiles and a Navy then you cant stop them entering Russias borders

Honestly, they should have established trenches throughout their newly claimed territory since day one. They should have prepared defense in depth knowing they lacked sufficient manpower to go on massive offensives. The Ukrainians will have a difficult time crossing the river as it is. If the Russians somehow fail to defends such a defensive line where nature does a majority of the work, then they deserve what ever fate comes of them. Sorry if that is blunt, but the strong will survive and the weak and foolish will falter. It is just natural. If the weak band together they become strong and if the strong fight amongst themselves they become weaker.

This way, Russia will lose.

ALLOWING NAZIS TO SHELL RUSSIAN TERITORY MEANS FAILURE AS A STATE FOR RUSSIA. IT HAS NO REASON TO EXIST ANYMORE IF IT CANNOT AND WOULD NOT PROTECT THE CITIZENS.

I am terrible disappointed.

I too am terribly disappointed. why nobody has prepared a plan b. I have the impression that the Russian government is sailing blind, the military high command too. it might be time for the Soviets to regain power, purge all these incapable and corrupt people and really take the war back in hand. and then it is not with a few trenches that we stop a front, we are no longer in 1914! we need bunkers, real fortified positions. you have to make the war economy work, you have to make people work to win. and it must above all be said that it is a war and that everyone is in the same boat

Im pissed of. The russians never etop to go back. The could not kiev, they lodt Kharkov . They lost strategic Yzioum, they will loose kerson whille the made a referendum few wks ago. Forbmonths they tried to enter in Bakhmut. They cznt. What the hells are doing their incompetent general. Itd a disaster for Russia and im sad to write that

Obviously Kremlin guys are traitors, including Putin. Until they make some large territory gains and destruction of Ukr NATO troops in large numbers I will believe they are traitors.

We haven’t started anything yet. __ Vladimir Putin

USA is a shithole, EU is becoming one
Reply to  Sephiroth

So when will you do something to PROTECT YOUR PEOPLE!?

We haven’t started retreating yet, the best is yet to come. Vladolf Putler

Vladimir has lost his game. And very badly. He had no idea how poor Russian military was.

There are 21 listed but only 3 showing ?

Censorship on steroids has SouthFront been taken over by MSNBC

No censorship but admins gain bitcoin by erasing comments

HA HA HA little lines in the sand , We are coming for Crimea so you best keep running home loser terrorist russian garbage.

apart from that you are a moronic dumbass, you sound also a bit like adolf and napoleon. and we all know the final result, maybe except you.

Uh, do we? Well, tell us…what is the final result?

we know that the most Jew S of A population are uneducated morons, but even they should be able to read a good history book, than you may know how napoleons and adolfs “visit” to russia finally ended.

Crimea will be freed by the Ukrop army. Just a matter of time. Its game over.

LOl you moron. ukrops didint manage that in the last 8 years, even without soon 500.000 russian soldiers on the front line. in few months we will see who will free what. hope to see the russian victory parad ein odessa next summer.

You lost on all the frontlines. Kyiv , Kharkiv , Kherson , its just game over no need to argue. Russian weapons are too weak compared to NATO weapons. And offcourse , the Ukrops have very very strong will to fight the Russian invaders.

Putin actually did ask to join NATO but they told him no because the whole point of NATO is to create an enemy so that we can spend money on the military. No one besides Russia was a credible threat. We tried to make terrorism a thing after Russia collapsed in on itself but fighting terrorists is gay. So, I must admit that everyone in America’s MIC is very excited the bear woke up.

I think that will be too much for the russians red-line shit. Instead of trenches just seriously threaten with tactical nuke or anti- americunt monkey pox grenades.

Strategic retreat™ as a gesture of goodwill!
Reply to  Romanian whore

USA is a shithole, EU is becoming one
Reply to  Mario Ceva

Please note that this also reflects the unwillingness of the passive homosexual in the Kremlin to use nuclear weapons to defend Russia and Russian civilians.

The wet dream of Great Patriotic War is dying out in Russia. It just can’t sell much among young Russians. Free down fall and becoming more and more “p.. ssy” is the future of Russia. Militarism is biggest loser.

Poor poor Russia you got caught with your pants down.

Andrei Martyanov so far doesn’t want to admit that Russian military is piece of shit. Denialism is very common among pro Russia “military experts”. In reality most of Russian military history has been great tragedy for Russians. That sad fact should finally be admitted.