The West is fanning hysteria around the alleged direct Russian participation in the war in Syria. 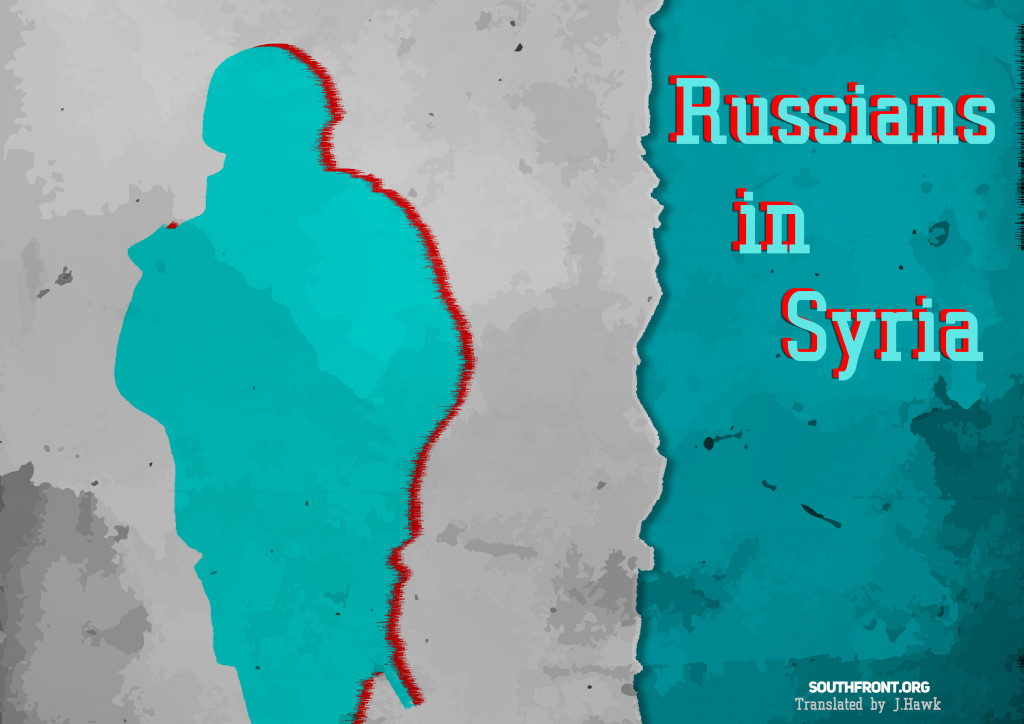 This article originally published at Interpolit, translated by J.Hawk exclusively for SouthFront
Western media and social networks have begun to actively disseminate announcements concerning the participation of Russian troops and aircraft in combat operations against the Islamic State in support of Syrian government forces. So, on September 1 Israeli media wrote about the start of Russian “military intervention in Syria,” which signals the arrival of Russian fighters, attack helicopters, military instructors, pilots, etc., in the country.
On September 4 there appeared information that the Syrian army supported by Russian artillery crews expanded the territory under its control around the port city of Latakia in the north of the country. In response, the Kremlin announced that the rumors concerning the alleged Russian participation in the bombardment of IS positions in Syria should be dismissed. But the information campaign which has certain defined objectives, is continuing full steam.Journalists are citing President Vladimir Putin who supposedly confirmed the fact of Russian military participation in the Syrian conflict on September 4. In actuality we are dealing with an effort to distort the Russian president’s words, who simply commented on the possibility of Russia joining an international coalition against the IS. Putin underscored that US coalition actions against the IS have been ineffective. “US aviation is launching strikes. So far they have been ineffective. But to say we’d be willing to do this today is premature. We are already rendering Syria significant assistance in terms of equipment, weapons, and training. We have major contracts with Syria dating from 5-7 years ago which we are fulfilling in full measure,” Putin said.As far as official Washington is concerned, they have not confirmed the veracity of these announcements, but have already expressed concern. “We have seen media reports suggesting that Russia might be sending its troops or aircraft to Syria. We are closely following this topic and maintain contacts with our partners in the region to obtain more information,” said the State Department representative Mark Toner.  The US Secretary of State John Kerry held a discussion on September 5 with Russian Foreign Minister Sergey Lavrov, during which he communicated his worries that should the rumors turn out to be true, it could lead to an escalation of the conflict in Syria. The State Department is convinced that any provision of assistance to Damascus, including of military nature, is counter-productive.
On September 7, the presidential press secretary Dmitriy Peskov confirmed that Moscow is continuing to collaborate with Damascus on the matter of resolving the crisis, but had no information at his disposal on whether Russia expanded the volume of its military aid to Syria. Peskov reminded that only last week the President gave a detailed answer to this question. “I can’t say more than what the President already said,” Peskov added.Russia never hid the fact that it supplies military equipment to Syria’s government to help fight the Islamist radicals. It’s not news nor a secret, but for some reason those facts are attracting additional attention. The West already saw the specter of Russian soldiers on the Donbass but could never provide a proof other than empty words mysteriously backed up by statistics. It’s a familiar scenario, and the purpose is not new either: it is to weaken Russia, portray it as an aggressor, and attempt to draw it into a new quagmire. However, as years of the Syrian crisis and the recent events on the Donbass have demonstrated, Russia won’t fall for it, just as it will not sacrifice its interests or the interests of its allies.
A mountain out of a molehill
Chief editor of the National Defense journal Igor Korotchenko assured us that there are no Russian troops in Syria. Russia is supplying weapons there, but that’s not forbidden by any international obligations because the UNSC has not imposed any sanctions on Syria that would ban arms deliveries to that country.”But, I’d like to emphasize, Russia is not fighting in Syria, that’s completely out of the question, therefore all these stories are speculative in nature and are not based on facts. It’s also out of the question that Russian soldiers will fight in Syria. The Islamic State is America’s creation, therefore this misadventure will have to be paid for with lives of US soldiers,” said Korotchenko.

He believes that Russia’s aim is to support its allies by supplying weapons to those countries who fight the IS, including Syria and Iraq. The latter, Korotchenko reminded, is receiving billions of dollars worth of weapons, which is perfectly normal business for our defense industry. “Another of Russia’s tasks for today is the strengthening of its southern periphery in cooperation with the Collective Security Treaty member states in order to combat the militants’ attempts to break into the post-Soviet space. Therefore we are holding exercises, including with our partners. But let me say this again: Russia will not fight against the Islamic State in the Middle East,” said Korotchenko.
There are also thoughtful voices in the US: for example, Derek Monroe, an analyst for Foreign Policy, expressed the opinion that the story of the alleged Russian military participation in the Syria war is being fanned deliberately in the West. “I heard Putin’s interview both in Russian and in translation. And there was nothing unusual in it. From the perspective of US foreign policy, I, to put it mildly, can’t call it a revelation. But, unfortunately, US media are ready to fan hysteria concerning “Russian aggression,” “Russian participation.” We, the serious analysts, are simply astonished by such actions! We don’t know how to perceive them, because they are making something out of nothing,” Derek Monroe expressed his outrage.
A two-front war
According to Radzhab Safarov, the advisor to the Russian State Duma Chairman, the hysterics concerning the alleged Russian military presence in Syria suggests that the West really doesn’t like Russia’s firm support of the Bashar Assad regime. That’s what is preventing the coalition forces to remove Assad from the political scene and finally destroy the Syrian regime.
“Russia is providing Syria with mainly military and technical assistance, and possibly also consultations at advisor level. Russian equipment naturally has a great deal of influence on the course of the conflict and makes Syrian defensive and even offensive operations more effective. It interferes with the Western anti-Syria coalition plans to finish their operation and inflict damage on Syria, Iran, and Russia,” Safarov said. “Having removed the Assad regime, the West will solve three problems all at once: first, it will weaken Russia’s geopolitical position and have access to the entire Middle East. Secondly, it will make Iran more vulnerable. The third benefit is that it will expand Israel’s prospects for effective action against Hamas and Hezbollah.”
So here Russia’s position and Russian equipment in Syria are an obstacle. As Safarov has noted, that’s why the media are doing the dirty work of disinforming the entire world public opinion, in order to prepare the soil for decisions made at the highest level and to unify a coalition for the purpose of a more direct assault on Assad. If one were to make parallels to the war on the Donbass, while the Donbass has strategic importance to Russia, Syria’s value is geopolitical.
“That’s why the Western partners made all this effort on the Donbass in order to weaken Russia. And now they are hoping to draw Russia into the Syrian quagmire in order to weaken our positions through a two-front war. I am allowing the possibility that there will appear new hot spots in those regions where Russia’s regions are concentrated and where Russia’s reaction will be necessary. The third possible front is in Central Asia or the Caucasus. These processes have already begun in Tajikistan and Kyrgyzstan,” Safarov warns.
Knocking the card out of US hands
Therefore Russia ought to act more decisively. Semyon Gadasarov, the Director of the Center for the Study of Middle East and Central Asia, is convinced that the Russian Federation should render effective aid to Syria and conduct more effective negotiations with the Syrian opposition. It’s well known that the Syrian army is in a difficult position, there is fighting in Damascus suburbs.
“I have long proposed to give Syria’s leadership aid in the form of a $2-3 billion credit, but not in the form of money but in the form of necessary weaponry–artillery, small arms, aviation. I believe that we should expand our advisory apparatus, send our military instructors and, most importantly, get the Syrian government to agree to direct military assistance to the Syrian Kurds,” Bagdasarov argues. “This will make it possible to create an alliance between the Assad government and the Economic Union Party which is very friendly toward Russia and currently controls large part of the Syria-Turkey border. All of that would create the conditions, with our indirect support, to capture the city of Rakkah, the unofficial IS capital in Syria.”
The expert is certain that a project on this scale would be useful to Russia internationally. Moreover, the information would not weaken Russia: $2-3 billion of weapons from Soviet-era storage facilities are pretty minimal expenses which carry no risks to our side.
“This would be a genuine super-operation. Russia should act boldly and decisively without looking to the West. We would be able to knock out a card from America’s hands, and as far as the EU is concerned, which is suffering from a terrible migration crisis, we could demonstrate that we are a major power capable of defending our interests not only close to our borders,” Bagdasarov concludes.
Therefore Russia will not enter into direct combat against IS and risk its own stability, as the US hopes. But our country has helped and will continue to help Syria, and that support will continue mainly in the military-technical and political spheres.

Tags:eu, russia, syria, the us