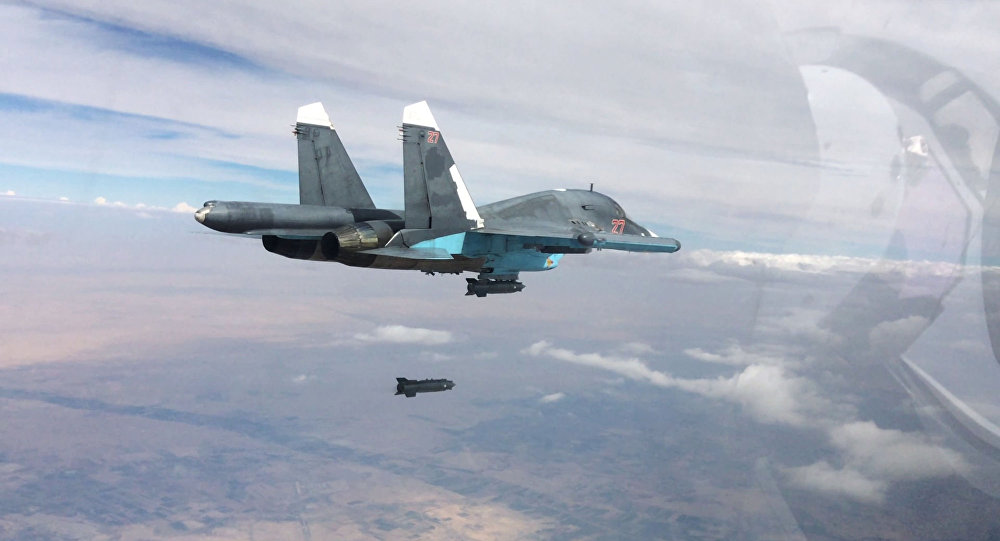 © Photo: Ministry of Defence of the Russian Federation

According to the Russian Defense Ministry, the Russian warplanes have carried out 16 combat missions hitting 57 terrorist targets over the past 24 hours.

“Due to poor weather conditions and in an attempt to avoid casualties among civilians, Russian aircraft only performed combat missions in the provinces of Latakia and Deir ez-Zor,” the Russian Defense Ministry spokesman Maj. Gen. Igor Konashenkov told reporters.

Also, the Russian warplanes hit the terrorists’ rocket artillery positions and a fuel depot in the vicinity of the village of Bgelia in Deir ez-Zor province.

“Surveillance confirmed the destruction of two rocket artillery systems as well as detonation of the fuel stored at the facility,” Konashenkov said.

A ISIS field training camp including the militants’ command post and barracks in the vicinity of the village of Mreya in Deir ez Zor province was also destroyed.

Separately, the Russian jets hit the terrorists as they fled Latakia being attacked by the Syrian Arab Army.

“Over the past 24 hours, Russian jets carried out 4 strikes on the terrorists near Jabal al-Akrad (Latakia province), who left their positions while being attacked by the Syrian Armed Forces and patriotic opposition units,” the general said.

“Russian Armed Forces continue conducting a humanitarian operation aimed at delivering supplies to the civilians trapped in the regions of Syria controlled by the militants. On January 15 a cargo plane of the Syrian Air Force using Rusian P-7 platforms airdropped a total of 50 tons worth of food supplies and basic necessities to the city of Deir ez-Zor,” Konashenkov noted.