The Syrian Arab Army (SAA) is reportedly engaging in heavy clashes with ISIS remnants in the eastern countryside of Homs.

According to pro-government sources, the army launched early on April 9 a large-scale operation against the terrorist group’s cells in Homs desert.

Opposition sources contradicted these claims claiming that ISIS cells were carrying out a large attack on SAA positions near the town of al-Sukhnah and Wadi al-Waer. The sources said that Russian warplanes were supporting army troops by targeting ISIS fighters and positions in the Homs desert. 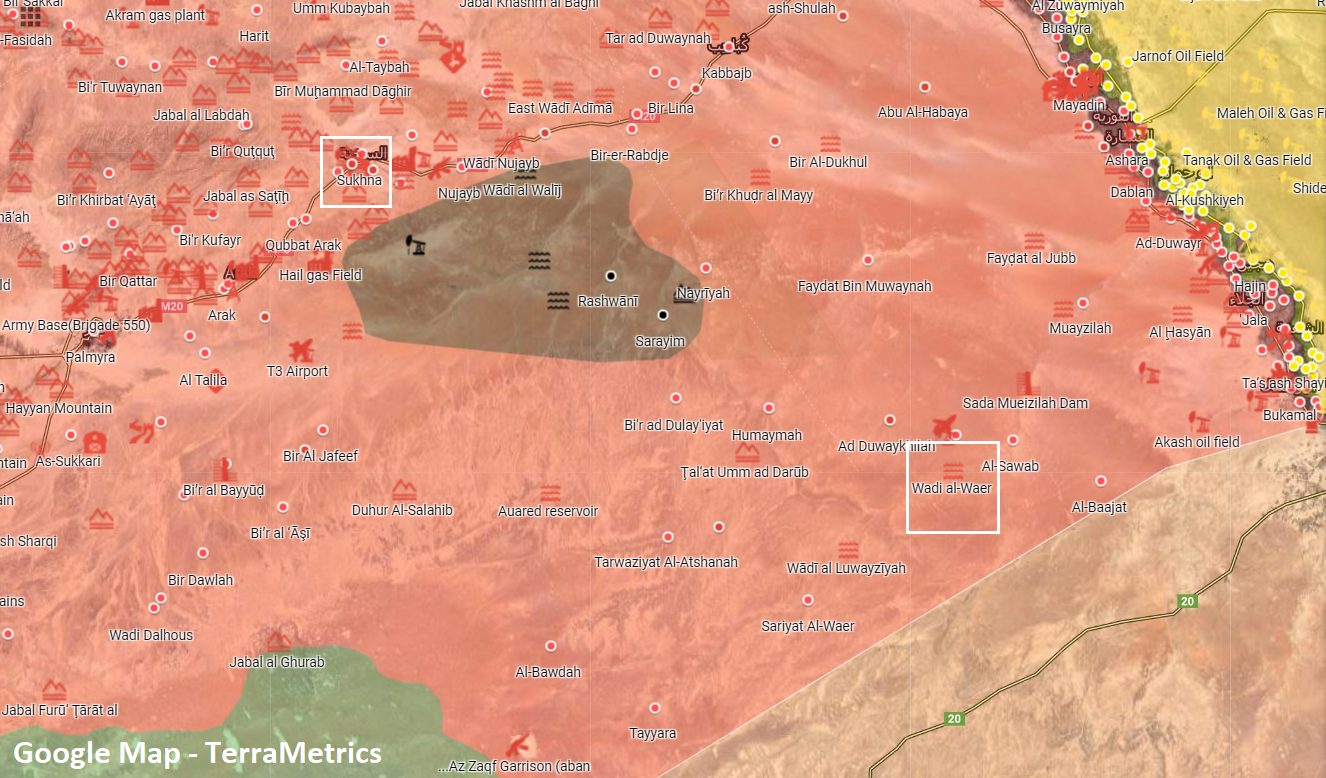 The UK-based Syrian Observatory for Human Rights (SOHR) reported that 18 SAA soldiers and 11 ISIS terrorists have been killed in the clashes, so far. These claims have not been verified, yet.

ISIS maintains a serious presence in the Homs desert, which lays between western Deir Ezzor and eastern Homs. Last month, the group released a 28-minute video titled “Epic of Alteration 2,” documenting some of its recent attacks in the region.

The situation in eastern Homs will likely clear up in the upcoming few hours. All the current reports are conflicted and unverified.

With the US Zioterrorists occupying the Tanf region in south Syria, and almost all of the eastern bank of the Syrian Eurphrates, ISIS will never stop having weapons and mercenaries to carry out surprise attacks in the desert against SAA soldiers. Maybe a more hands-on solution to the US Zioterrorists’ smuggling of oil, weapons and drugs in the region is needed.

And Your comment was taken fromthe “Damaskus Fairytales” :) Its so funny You even believe in them.

Russia is weapon for no oil:)

I hope this time SAA-RUssia really finish their job of totally eliminating ISIS in this area.

It should have been done a few years ago. But better late than never !!.

They have no qualifies troops for it. The alternative to outnumber ISIS is not seen as well apart from a few times.

We dont know what the Russians do there at all. Jets are comming in so fast and see nothing. Some lazerpoens as F16s still use, miht be a good option for succes.

Anyone know the outcome of this?

Its written above, we dont know.

I am an evil person having an evil pocket calculator and relate to facts from the SANAtorium.

It says in a strange way, that Human Rights Syria(SOHR) most likely is the best source.

Rgere was a hard attack by ISIS with succes but defence. Next the Assads came in with reinforments and tryed to chase ISIS and might have hit one or two.

So from that I guess 18 Aasads and 11 ISIS is as corrects as its goes.

The importance might be, that ISIS are not many and dont get reinforcements. They got eroded and Assads has meny spendables.

sure in due time turkey will be back behind its border, the disintegrating states of A will be back in Iraq trying to hold on to whatever and the kurds will be back as tenants in the borderland and the jews in palestine kicked all the way to hell and isis, as proselytes of the jews, will be almost gone except small groups of hard dies keeping up the struggle to no avail.. give it 2 to 3 years.

Most excellent. SAA is gaining, Turkisis is draining ;)