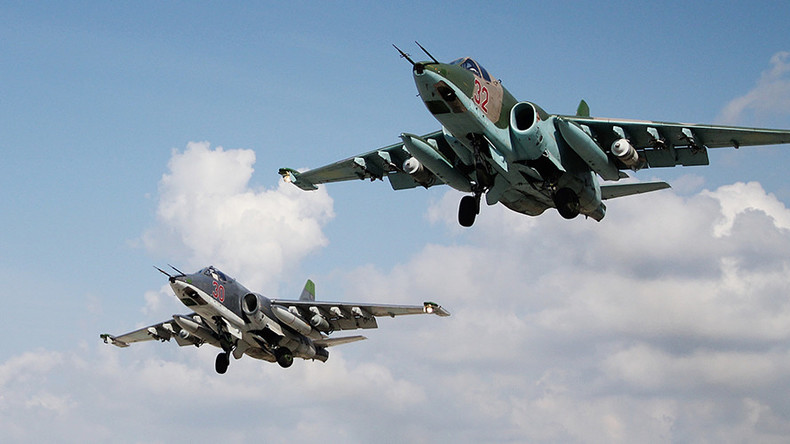 On August 10, warplanes of the Russian Aerospace Forces (VKS) carried out a series of airstrikes on hideout of ISIS cells in Syria’s central region.

According to the Syrian Observatory for Human Rights, more than 13 airstrikes targeted caves in the outskirts of the town of Resafa in the southern Raqqa countryside, where ISIS terrorists have been taking shelter. The London-based monitoring group didn’t report any casualties as a result of the strikes.

The airstrikes were likely a response to an attack by ISIS cells in the southern Raqqa countryside that took place on August 7. The attack targeted a vehicle of the Syrian Arab Army (SAA) to the west of Tabqah Air Base. ISIS’s official news agency, Amaq, claimed that four service members were killed in the attack.

Over the last few months, the southern Raqqa countryside became the main stronghold of ISIS cells in all of central Syria.

Between June and July, the SAA and the VKS killed more than 20 terrorists of ISIS during operations in the southern countryside of Raqqa. This was not apparently enough to keep the terrorist group away from the area for too long.

ISIS cells are likely trying to maintain a strong presence in the southern Raqqa countryside because of its proximity to Syria’s northeastern region, where the terrorist group presence is the strongest. The terrorists may be surviving off support provided by their comrades in areas held by the US-led coalition and its proxy, the Syrian Democratic Forces.

ISIS and other Islamic extremist groups will continue to thrive as long as the mericunt bastards are present in Syria, Elimination of the sponsors would cease the existence of the desert dwelling rats.

They have no sponsors Mr and Mrs Moron. If so they had advanced weapons .

People still use that kind of illusion to keep Assads in seat.

Trash me some more. I like to be talked dirty to and spank me with your big dk.

Syrian observatory for human rights —SF you mean the London couple in a flat paid £18,500/month by the UK spy organisations and given £100,000,s to buy business equipment that aids London City Propaganda – in case anybody doubts me I have ALL their details and associates.

I heard they were also good for teeshirts and women’s underwear.

So do You use it in Skotland or what?

He was in the Free Syrian Army delegation to london. He owns and runs a dry cleaning business in Coventry and runs his spoof news from a sofa in front of a TV

Thats how it is. Just as here many can write into the site no You are in Japan or Aregentina.

He then has socalled reliable sources as well as verified ones. Compared to most from there he is higly reliable.

There are big mistakes now and then. I forgive him. Its not on purpose.

Anyone want to sex chat? I’ll let you see my giant holes.

Please tell us how you got your avatar picture in here!

Both he and bell-end-cat are getting rich with public money. It’s a welfare system for malcontents and miscreants.

its a very reliable source. You are no spy just because You collect and distribute mainly very sober news.

Well in Russia You are. Here Putin has closed Facebook because people should not see his real face. He has been bringing 100% propganda at Youtube form dome basement in Vladivostock. Thats a no go too.

i ss is who the F is taht nazi templer sheizen

Obviously once a week reports on Ukraine would be sufficient. No need to beat dead horses.

The contest between biggest joke id getting harder: russian air force or navy 😂🤣🤡🏆

Did you saw all the russian planes destroyed in the crimea base? Satélite footage everywhere now, hilarious 🤣😂🤣🤣💩

ISIS, and every other violent gang is Syria could not carry on without lots of help from the US and nato invaders. Syria is lost. Their plan for democracy change didn’t pan out. Their once mighty ISIS are reduced to being regarded as fringe lunatics fighting skirmishes against the SAA and other funded groups such as themselves. Maybe they just can’t agree on the number of virgins allocated them by their maker.

Quite soon these fanatics will be killing each other over the dwindling funds, the dwindling free fags and spirits, and other free western luxury items they are so fond of.

Syria is just another theater of operation where the Russians couldn’t solve basic tasks and ended up in a frozen conflict.

Typical infections from You again. The relative few ISIS supporters are local Syrians and in the same ways as fx in Iraq.

They are not as you insinuate at all. USA stopped and after a year or two was able to stop the Saudi support as well.

How can people like You be so dark in Your head even You are told and see ISIS attack USA as well.as SDF.

Are You with bananas and put them in Your behind or what.

I’m an old hag who wants attentions. Cuss me, spank me, I’ll eat your feces too.

About 8-10 Russian planes destroyed in Crimea at the base Russian MOD claimed no planes were destroyed at. Very sad, and the Kremlin is doing everything it can to avoid the issue and avoid retaliation. What in the hell is going on in the Kremlin????

Both since then has had bad logistics for almost anything. Assads still cant cover the way to DEZ.

The Russians ar lucky if they hit anything of imprtance there.

except no US air craft dare cross in to Russian no-fly zone….tebe jens need to suck more amerikan cock

Do no make the russian mad I 7

As long as the mother of ISIS, JSIL, is not finally outlawed and destroyed by the world community, there will be war everywhere!

Back into their holes were they belong. Russia 🇷🇺