At least eight Syrian government fighters were killed in a series of attacks by ISIS in the central region, the Syrian Observatory for Human Rights (SOHR) reported on February 20.

According to the London-based monitoring group, the terrorist group’s cells targeted several posts and checkpoints of government forces around the Homs desert on February 19. The region lays between eastern Homs and western Deir Ezzor.

The Russian Aerospace Forces (VKS) responded to the attacks by stepping up its airstrikes on ISIS cells and hideouts in the central region.

“Russian jets continue their airstrikes on various positions in the Syrian desert, executing at least 130 airstrikes, in the last 24 hours, targeting ISIS positions in the Aleppo-Hama-Raqqa triangle and the deserts of Deir Ezzor and Homs,” the SOHR said in its report.

The Russian airstrikes on Syria’s central region killed 21 terrorists, according to the SOHR. At least twelve of them were eliminated on February 19.

ISIS cells in the central region reportedly receive supplies from US-backed fighters based in the southeastern area of al-Tanf.

So far, intense operations by Syrian government forces and the VKS have prevented ISIS cells from expanding their influence in the central region. Nevertheless, more efforts are needed to contain the growing threat.

What is the point in these airstrikes? They are obviously not doing any good and having no effect whatsoever.

according to your CIA employer

Keep pretending Putin.
All we need to know is, you Russians transported the Muslim terrorist ISIS members and their families to Idlib in air-conditioned buses in total safety instead of killing them.
Russia = ISIS

Keep pretending CIA/MI6.
All we need to know is, you Americants/Brits transported the Muslim terrorist ISIS members and their families to Idlib in air-conditioned buses in total safety instead of killing them.
CIA/MI6= ISIS

Well,
You’re denying what everyone knows to be the truth.

Your welcome to Australia or New Zealand,though better (non blair muppet
nz) Decent people deserve reasonable constituates,defending europes no easy task sure,better off assets than fascists,thus how does it harmonise?

The future is set,they lost their freedoms retards like usa todays (period)
They fascists who cannot accept freedom,shall not have it,no ifs nor butts,
Knowledge in the truth has power,not cia/soros,heck they can’t even get on with the times,let alone try to deal with todays,what made the great?
They who defended the truth with knowledge,why their loss is your gain!
Stay safe. 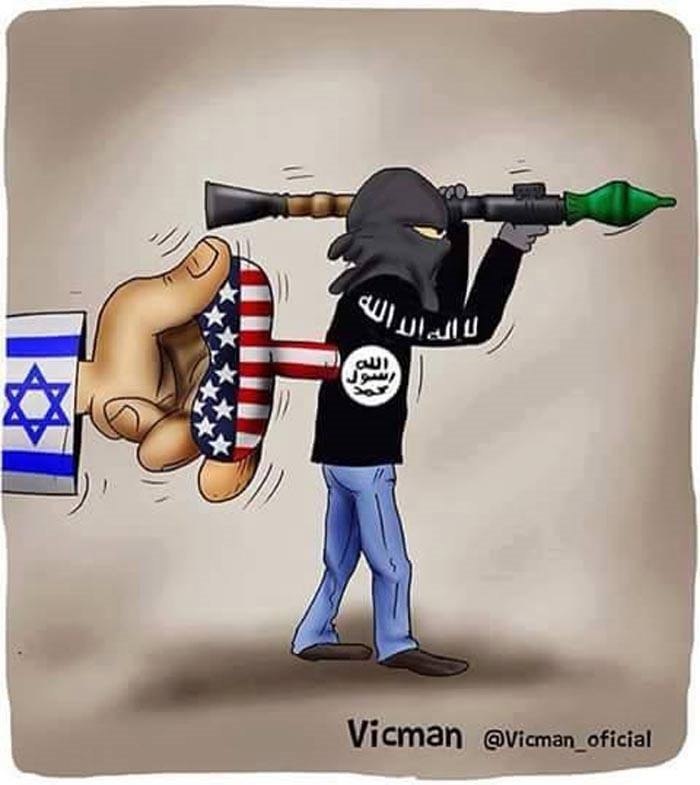 Well,you need to get of the lgbtq drugs,and the more you try to use the others flag in vain,asyou go about ignoring everything,the more you will surely die of se’low treasonous death,iq of your shoesize,no guts=no glory!

Anglo-saxon guts what can i say…capitalist guts for robbing the other,there comes from the habit…and today extends to EVERYTHING and ANYTHING what what anyone can see on MSM propaganda owed by the khazarian mafia where anglo-saxons are mercenaries and deceivers in this Malefic Game!

I get it, you’re still angry, because of Russian (and Iranian) interference the Anglo-American-Jewish alliance failed to achieve its regime change objective in Damascus.

Assad is less than nothing.
There is no Syrian government nor regime in Syria.
In fact, there is no Syria presently.
Said land mass has been partitioned between NATO, Turkey, Russia, and Israel.

Assad was able to convince both the Iranians and then the Russians, to come to the aid of Syria and its people. If for no other reason, makes him a leader.

But yes, you’re right, Syria, like Iraq, Libya and Yemen (all targeted by the Anglo-American-Jewish alliance) is a mess today. But Assad, he still remains in power in Damascus. My sincere condolences, I know that fact gotta hurt.,

” he still remains in power in Damascus. ”

So hes the leader of a city-state.

Assad the butcher? Get you hand off cameron you wanker,
YOU LOVE WANKERS EH EU/NAZI SHILL!Guess what,you are a traitor too!

And yet, after ten years of war, all four entities, and more besides, couldn’t eradicate the country of Syria. It still stands with the full support of its proud people.
With all their might, arms, and money, over the course of this ten years the US/isreal/nato cabal of shysters still cannot stamp it out.

Syria is rebuilding its strength for its upcoming victories and its Russian ally is combat testing all it can in the meantime. Plus the Chinese admin will want to point their Belt & Road towards Damascus at some point.

Syrians no longer exist as a cohesive nation, a unified people.
The overwhelming majority of indigenous Syrians are a traumatized, demoralized mess. Only the ruling classes lead a comfortable life, thanks to Russian support.

The Chinese Belt & Road Initiative is dead on arrival. Soon the silly Chinese will have to admit to themselves that producing, selling and *transporting* real goods and services to the West for nothing (fiat euros and dollars are nothing) was stupid and counterproductive.
I give it another six months or so.
Besides, America is going to yank that chain on its colonies soon.

Funny guy.
Enjoy getting your Shia fighters get slaughtered with Putin’s collusion and help.
At the Russian military parade, it was Netanyahu the Jew who was sitting next to Putin the Jew.
I didn’t see any depraved Iranian Mollahs there.

Allready defeated,mistrespresented the Commonwealth yet have a serious protestant/ugodly complex issue,no solutions only makes another problem.
go back,do what you know best n suck blairs dk,you traitorous piece o fascist trash,trying to con your way to freedom,stupid try hard nazi winch,
what a wetard,ooghrr!
Atleast they royals are loyal,not that you give a rats arse and charles shook hands with putin,so you vile browder khazar incest sprog got it in for peace?

Get Thee Behind Me Satan,Jesus is Lord:

Compared to the satanic pitchfork,(ressembles french revolution,decapitated head on fekn it,this piece of traitorus low life scum that represents the bottom of my boot has no clue about anything (period) more likely fraud and one of many profiles pretending to be what is ain’t because the liar is a loser ,nothing else but a rotted to the core evilutionist of hate,which is why brexit,
why the opportunity to make things right ever since blair the protestant lair,

No britain was empowered and much is todays again by church of england,of course the homoseual orientated satanic protestants will cry in rage,either way the uk atleast had merit in the past compared to cia/eu-epp 4th reight of corporated tyranny,which is why the kweers will be devoured in their own wake,simply put smash em with the truth,if anythiung realm has the valour not liars and sick fks whom can’t discern what gender to be,oh yeah
Its a loser ok and it will keep on losing forever,more this I swear!

The eu flag will be banished and the proper flag ascends to where it truly only belongs in the Commonwealth,ignore the fake british skank,nuff said!

cornhole has cataracts—bad healthcare–CIA refuse to improve payment for propaganda….cornhole only can afford cheap LSD

Thanks for the disinformation. C U Next Tuesday.

Take the word of the statesman over any psuedo wannabe nazi,focus on brexit you loser!

Well isis is the creation of the perfidious albion where your perversity is coming from. Wahhabism is another mi6 work! White helmets same rooted roots too! Plus all the nations enslaved by by the anglo saxon SCUM! Plus the Rotten Child of Satan residing in the city of Perversity! Genocidal race u are along with ur khazarian brothers into deception,genocide,humanitarian crimes, spreading different kinds of terrorism around the World etc This is the dirty race u come from Diane Fascismwell ! All for almighty capitalist-fascist profits and world depopulation ….

Right,
It’s not the Muslims chopping heads and violating virgins by the thousands. It’s us white Europeans.

Poor NATO that sees its cadets massacred and cannot do anything to defend them, even if it reluctantly cannot put its face on it, you know that officially the NATO countries are in Syria precisely to fight the terrorists, after having trained, armed and paid them the monthly salary.

Because NATO cares. Hahahahahahah . Thats good one. They have a whole planet of poor idiots to recruit from.

It became known about the development in Russia of a new rocket called “Gremlin”
….the dimensions of the Gremlin will be smaller than the previously adopted Kh-47M2 Dagger. Presumably, “Gremlin” will be able to overcome up to 1.5 thousand kilometers and six times the speed of sound.</b
… American military analytical magazine Jane's Missiles & Rockets wrote that the planned missile length is six meters, and the weight is about 1500 kilograms. Probably, the GZUR will mainly have to have an anti-ship purpose, noted the bmpd blog in LiveJournal.
On February 17, it was reported that the Russian fifth generation fighter Su-57 was tested with mock-ups of a superweapon – a new hypersonic missile. “The experienced Su-57 fighter, as part of the tests, performed several flights with functional mass and size mock-ups of a new Russian intra-fuselage hypersonic missile,” a source told RIA Novosti. He added that in the near future, it is planned to conduct throw tests with new missiles belonging to the air-to-surface class.

ISIS vermin needs to be targeted at its source: the Al-Tanf base.